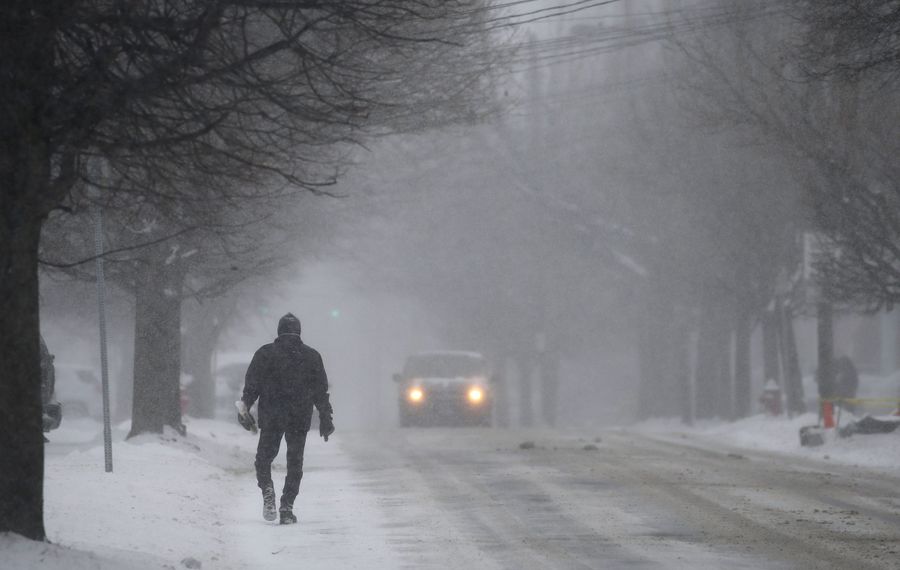 Since I wrote my previous article at the start of the week on a wintry pattern return on the horizon, I’ve been hearing talk, albeit “loose talk” mainly from friends, of a whopper snowstorm en route for the weekend. I hope that's not the impression I left in the first article. In terms of amounts and the Niagara Frontier, the weekend storm system will be significant but probably come up shy of being whopper-esque. Before we get to that storm, let’s get to a vigorous smaller system that will impact our region Thursday morning.

After a low passes to our east, it will begin to intensify, deepening sharply once it moves off the coast. Its circulation will enable it to bring in a gustier west-northwest flow of colder air, and change the rain showers over to snow in the wee hours of Thursday morning. For the Thursday morning commute, snow showers are likely to be fairly widespread, with some limited blowing snow, although the winds do not appear as potent as they looked in a model from Tuesday.

With a west-northwest wind of 15-25 mph and gusts to over 30 mph, the snow showers should be enough to reduce visibility at times and slow the drive. By early afternoon, a Lake Huron connection may develop, producing a narrow band of heavier lake snow for a time even close to the metro area.

For the evening commute, the winds will veer more to the northwest, sending most of the lake snow down into ski country and making the commute on the Niagara Frontier a little easier.

Temperatures on Thursday will fall from the low 30s in the morning into the 20s in the afternoon, with a nasty wind chill. Significant accumulations from this Thursday system of 4 to 7 inches will be confined to some of the hilly terrain well away from the metro area.

By Friday, we’re temporarily into the deep freeze. Fortunately, wind speeds will be light, making high temperatures in the upper teens more tolerable. As we move into Saturday, a developing larger area of low pressure will move out of the Plains toward Western New York. In its brisk southerly flow ahead of the storm center, more abundant moisture will be arriving as several hours of widespread accumulating snow. What will keep whopper accumulations out of the picture is this southerly flow also will bring in warmer air, first aloft and later at the surface. This will change the snow to sleet, then rain, as readings head into the upper 30s to near 40. 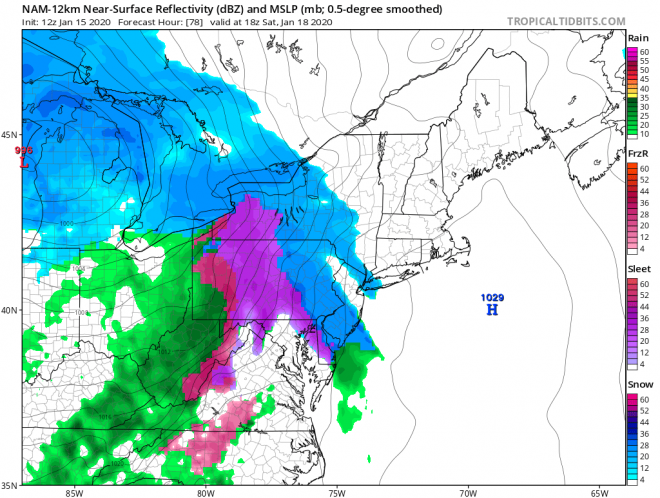 The magenta shade in this model indicates sleet/ice pellets, ahead of some rain showers.

A preliminary estimate of Saturday’s widespread snowfall ahead of the mix would be on the order of 2 to 4 inches. Rest assured, that to our north, strong westerly winds will develop in the low’s wake, with gusts up to 45 mph-plus likely. Some lake snow will begin to take shape as colder air begins to filter in behind the low.

Again, the west-northwest flow should send most of the accumulating lake snow down to ski country. Sunday winds will be in the range of 25-35 mph with some stronger gusts, so the wind chill again will be nasty. Readings will be falling back from the low 30s into the 20s.

In addition to whatever natural snow falls on the slopes Sunday and Monday, conditions for the resorts to make snow will become much more favorable in the cold, west-northwest flow moving into the Great Lakes. High temperatures on Monday and Tuesday will run from the upper teens on the hills to the low 20s, with nighttime lows in the teens and maybe some single numbers in ski country. For snowmobilers, I’m still not seeing signs of enough natural snow to open up trails north of the higher terrain. Even in the higher terrain, chances for lots of trail openings still appear dicey.

The staying power of this wintry pattern does not look to be “steady state.” Ensembles of the upper level flow show some brief periods of moderation interspersed by cold periods, rather than a long-duration warm ridge over western North America forcing a long-duration cold trough with a lasting pathway for polar air masses in the East. Over a period of days, the mean temperature as seen by the Climate Prediction Center has a decent probability of being below average, but not every day.

Even the model of the polar vortex shape and position posted by long range specialist Dr. Judah Cohen suggests the vortex will retreat northward toward the end of the month. That possible trend can be seen in the orange shading over the northern U.S. around Jan. 28.

The GFS operational model #PolarVortex forecast has been impervious to disruptions this winter so far. Last night's run predicted some disrupting. Is this the beginning of a meaningful trend or just another model head fake? I know, I should be providing answers not more questions pic.twitter.com/yEBZ81gI5a

It’s fair to say Cohen is a winter lover, but he does not engage in “wishcasting” over forecasting. For now, in addition to a tricky morning  commute Thursday and a windy, sometimes messy weekend, the coming cold will be sufficient to help out skiers and resorts. Some backyard hockey rinks should change from the liquid state to frozen. Winter haters will suffer bouts of grumpiness on occasion. Bottom line: I don’t think this wintry pattern, while much colder, is heading into the brutal category we sometimes endure in the Great Lakes.

I will update this forecast as necessary in the comments section below and on social media.