The baying of a beagle hot on the trail of a cottontail rabbit is music to the ears of any die-hard small game bunny hunter.

“Rabbit hunting is my life,” said Rick Giermata of Hamburg. “I love chasing them this time of year. It’s been a passion of mine for over 40 years now.”

It was 13 years ago when Giermata decided to honor retired Buffalo schoolteacher Frank Privitere of West Seneca by holding the first Western New York International Rabbit Derby in the back of a bar in Lackawanna. Privitere had just died from cancer.

“Frank was a fellow beagle and rabbit hunter, raising beagles for 50 years,” Giermata said. “We trained together, and his family became an extension of my own. He was a very giving person. When his youngest grandson was diagnosed with leukemia, Frank became very charitable with children’s groups. It’s only fitting that we help these groups and families in Frank’s memory and honor. He is looking down proudly, I’m sure.”

And so, the derby was born. It was designed to help someone with cancer, some charity or some program in need of funding. It was a way to “pay it forward” for someone in need and it’s been all of that and more. The fuel is the compassion for others, combined with the desire to share Giermata’s love for the pursuit of bunnies with all the people he could. Hunters are good people and he wanted others to know that.

The first benefactor was Lackawanna’s DARE program. The second was the Lackawanna Police Department and K9 care.

“The first sick child we sponsored was Michael Stranz in the third year and he’s now in college to be a cancer research doctor,” Giermata said. “I told him at the time that when he beats this, to pay it forward. I would say he has honored my request and then some. Every year now, he drives up from South Carolina to work the event and do whatever he can to help. This is what it’s all about and I’m grateful to be a part of it.” 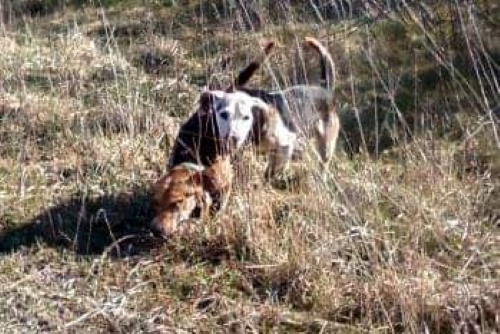 Chasing rabbits for a cause. (Photo courtesy Rick Giermata)

The hunt helps provide a good chunk of the excitement. It’s what brings many people together.

“Last year, we had something like 45 or 46 hunters participating, coming in from all over New York, Pennsylvania, Ohio and Canada,” Giermata said. “A little over 100 rabbits were brought in at the end of the day on Saturday to be weighed. Hunters could donate their rabbits to the derby, and I would clean them for families that could use a wild game dinner or two. Nothing goes to waste.”

The rules are relatively simple. Hunt wherever you want on Jan. 24-25. Abide by the rules of your state or province. The rabbits must not be frozen and remain whole. Bring them to the scales located at Southtowns Walleye Association of WNY, 5895 Southwestern Blvd.,  Hamburg, between 4:30 and 6 p.m. on Jan. 25. The top three rabbits based on individual weight will win the trophies and cash prizes based on a portion of the $25 entry fee for adults. Junior hunters ages 12 to 15 carry an entry fee of $10. There’s also a prize for the smallest rabbit.

“It’s not about the cash prizes, for sure,” Giermata said. “Most people donate the money right back into the kitty for whatever cause we are focusing on each year. Mostly it’s the bragging rights and who is going to carry off the Frank Privitere Golden Rabbit Cup. You can hunt as an individual or you can hunt as a team. Teams like the Polish Rifles, Team Canada and Team G-Dogs, to name but a few. People look forward to this all year.”

Giermata emphasized that if this event did not exist, he would be out hunting rabbits anyway. In fact, many of these hunters would be. They all share a passion for chasing rabbits with their dogs. They also want to be involved with this “feel good” gathering that could have anywhere from 300 to 500 people come through the doors to bless the family or special person being honored with a “night of happiness.”

“It keeps getting bigger every year,” Giermata said. “It’s great to have the Southtowns Walleye club involved, too. It’s sportsmen giving back to the community.” 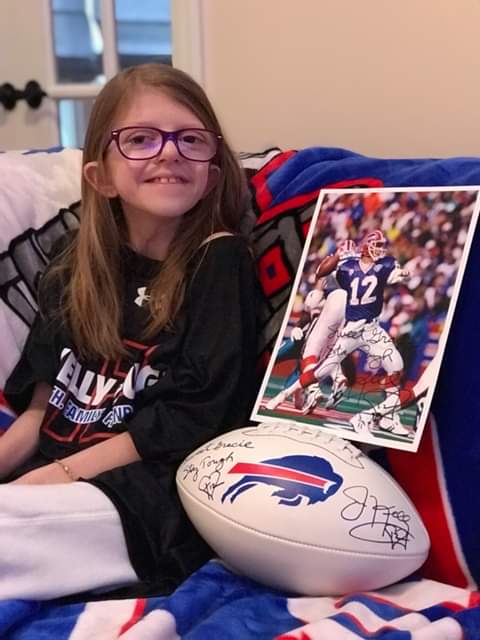 Gracie King of North Tonawanda will be this year's benefactor when the WNY International Rabbit Derby and Fund Raiser is held Jan. 25 at Southtowns Walleye in Hamburg. (Photo courtesy Rick Giermata)

This year’s honoree is 13-year-old Gracie King of North Tonawanda. Last year, she was diagnosed with a rare form of glioblastoma tumor on her spine. According to Giermata, she has received 28 rounds of radiation and monthly chemo. Her parents, Rick and Jessica, have served in the 107th Air National Guard out of Niagara Falls.

“Help me give Gracie a night of derby magic and give back to this amazing family,” Giermata said.

Starting at 5 p.m., when the doors open at the Southtowns Walleye clubhouse, there will be a long list of other fundraising options. There’s a basket raffle, live auctions, 50-50 drawings, games of chance, live music by the Jay McDonnell Duo, a Super Bowl pool and more. The kitchen will be open for cash food and there will be a cash bar. Admission is free and it’s a family-friendly event.

In addition to Gracie, a small portion of the proceeds will go to the local ALS Association, local veteran causes and a local children’s charity.

The event at the Southtowns Walleye clubhouse in Hamburg starts at 5 p.m. on Jan. 25. The live auction begins at 8. There are more than 200 baskets in the raffle. Grab a bite to eat and get in the mood as sportsmen and women unite for a great cause. For more information, contact Giermata at 602-5017.