Outraged that the state Department of Environmental Conservation declined their request to hold a public hearing on the proposed state brownfields cleanup for the former Tonawanda Coke site, members of the Clean Air Coalition Wednesday staged an impromptu version.

It featured a cardboard cutout of DEC Commissioner Basil Seggos tethered to a coalition member dressed in what appeared to be a large, papier mache costume that was intended to resemble Gov. Andrew M. Cuomo.

Despite the attempt at levity, Rebecca Newberry, Clean Air Coalition's executive director, said residents in both the city and town of Tonawanda who live near the now-closed Tonawanda Coke plant on River Road are very concerned about the state brownfields cleanup that is planned for the former manufacturing site and who will pay for it.

"We have concerns that the site is ineligible for the Brownfield Tax Credit program," Newberry said.

About 30 residents – many of whom are members of the Clean Air Coalition – showed up for the public meeting at United Steelworkers Local 135 on Sheridan Drive in the Town of Tonawanda.

The coalition has been pushing for a federal Superfund remediation as an alternative to the state's brownfields approach which, members argued, would allow Tonawanda Coke's polluters to walk away from their financial responsibility to clean up the site.

Ronald Malec, a retired Honeywell employee who lives downwind of the Tonawanda Coke site in the City of Tonawanda, expressed mixed feelings about the long-term damage caused by manufacturing on the site.

"I worked at Buffalo Color (Corp.) for a number of years, and I, personally, contributed to a lot of the pollution that went out of the stacks at Buffalo Color. So part of my story is I don't want to see that happen elsewhere. So it's kind of personal for me," Malec said, during a brief break in Wednesday's public hearing. 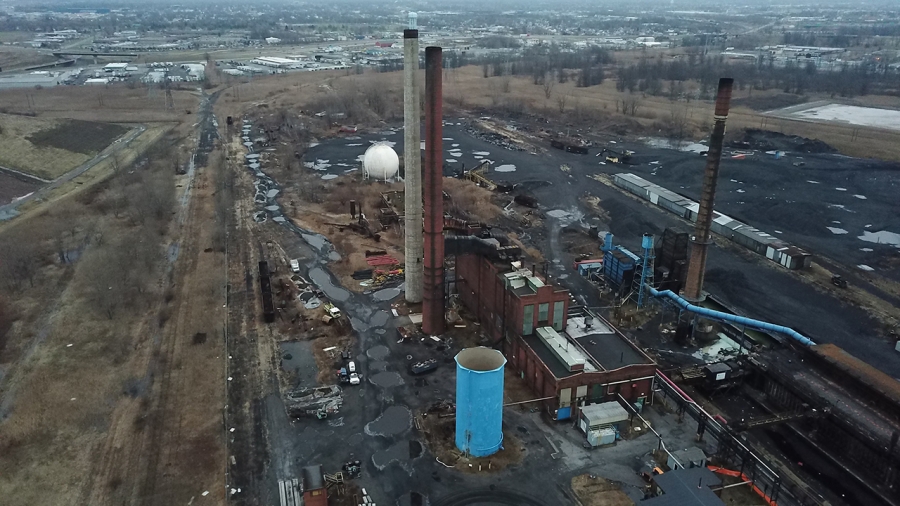 The former Tonawanda Coke site in the Town of Tonawanda. (John Hickey/Buffalo News)

Prior to selling the property to Tonawanda Coke in 1978, Honeywell owned the site and the Buffalo Color plant where Malec was employed.

"I don't blame Honeywell for my contribution to the problem because they paid me. They paid me well, but that was in an era before the Clean Air Act came in. It would have cost Honeywell way back in the '70s, like, $70 million to upgrade that site. They said, 'No, we're not going to do that.' So they laid off a lot of people and we lost our jobs. I felt bad about losing my job, but when I look back on it, it was a good thing for me and for the people of Buffalo," Malec said.

"You and me shouldn't have to pay for the cleanup of a company that has made hundreds of millions of dollars. I also feel that the brownfield (plan) is nothing more than a delaying tactic," he added.

The coalition believes a brownfields cleanup will allow Honeywell, which is responsible for some of the contaminants on site and has an $8 million mortgage on the property, to receive substantial financial relief through the use of state tax credits.

Maria Tisby of the Town of Tonawanda questioned why the state is even considering  the specific brownfields plan put forward by Jon M. Williams, the Buffalo developer who bought the Tonawanda Coke site with the intention of redeveloping it as a computer data center.

"I guess my problem is, in the beginning, they said it's ineligible for a brownfield. So stop right there. If it's ineligible, then the brownfield application shouldn't even exist," Tisby said.

"If it's ineligible, it's like high school. If you haven't completed your courses and you're ineligible, you don't graduate," she added.

DEC officials have said the brownfields program has a long history of seeking public input, but it does not provide for public hearings during the review process, which ended Wednesday.

Coalition members argued that, by the DEC's own regulations, residents can still forward comments with the brownfields application up to 30 days after the application is filed.

Newberry said comments gathered at Wednesday's hearing will be forwarded to the DEC by Friday.