But unlike the humans that toss her fish, she’s far from bundled up.

After all, Toni – a California sea lion – doesn’t need gloves or mittens for the weather. Her flippers are just fine diving in water as she zips around in her pool and strikes a pose for cameras.

Toni is just one of the delightful critters that can warm visitors’ hearts on a chilly winter visit to the Buffalo Zoo. While the zoo can get packed with visitors during sticky summer months, winter offers a slower, hushed setting that creates a relaxed experience to take in animals with minimal distractions. Buffalo’s cold also helps fuel fun climates for animals like rhinos and sea otters.

“The zoo is something people typically don’t think about doing in the winter or its viewed as a summertime thing, but we are open here, with animals that love the snow and others that are indoors in tropical environments,” said Christian Dobosiewicz, the Buffalo Zoo’s communications manager.

Dobosiewicz said that visitors can save on admission in the winter, with $8.95 discounted tickets through February. The walk around the zoo can be about two hours, so zip up your jacket before you take the stroll to catch these charming animals this winter.

Before Toni made her debut at the zoo last year, Jesse, Pokey and Dallas held down the waters in Sea Lion Cove. Jesse and Dallas are her parents and Pokey her "adopted" aunt.

Toni is still young compared to her friends and family, but she zips around the Sea Lion Cove, just past the zoo entrance, like a jetski. The cold weather doesn’t freeze over the pool and the sea lions build up enough fat to stay warm and frolic throughout the season.

After racing around the pool with her mother, Jesse, you may spot Toni sliding up a nearby rock to grab fish from sea lion keeper Lynn Hougle. Toni, who is still nursing as of early January, only plays with fish and doesn’t eat them. Her mother may know this and can be quick to turn into an aquatic Tre’Davious White, intercepting Toni’s fish for a quick meal.

Hougle said Toni is “a lot more independent” now, and this independence is on display in the underwater viewing area where visitors can witness Toni’s glimmers and twirls in the pool.

The otters are a relaxing bunch to watch in Otter Creek. Equipped with thick fur, they creep and bounce around their rocks in near quiet. When these guys dip into the water,  they whip up a cool assortment of bubbles that visitors can spot against the glass.

The otters are graceful and their slaps around in the water are crisp to a T. The smaller winter crowds make it easier to hear the impact of their acrobatic twists and turns.

While everyone is staying inside and keeping warm, Sakari thought it was a perfect day to roll around in the snow and go for a swim! Ahhh the life of a polar bear! #PolarBearDays pic.twitter.com/Ws8ucGgyHs

Sakari, a male polar bear, joined his female counterpart Luna at the zoo in 2017.

Still, he feels the need to explore his habitat every now and then by popping his head into a barrel or messing around with a tree.

Although the two polar bears live in separate areas for about half the year (Luna has been denning since November), that doesn’t mean there’s a downtick in adventure. Sakari likes to dig holes, swim in his water and roll around in snow “like a kid in a snowsuit,” Dobosiewicz said. 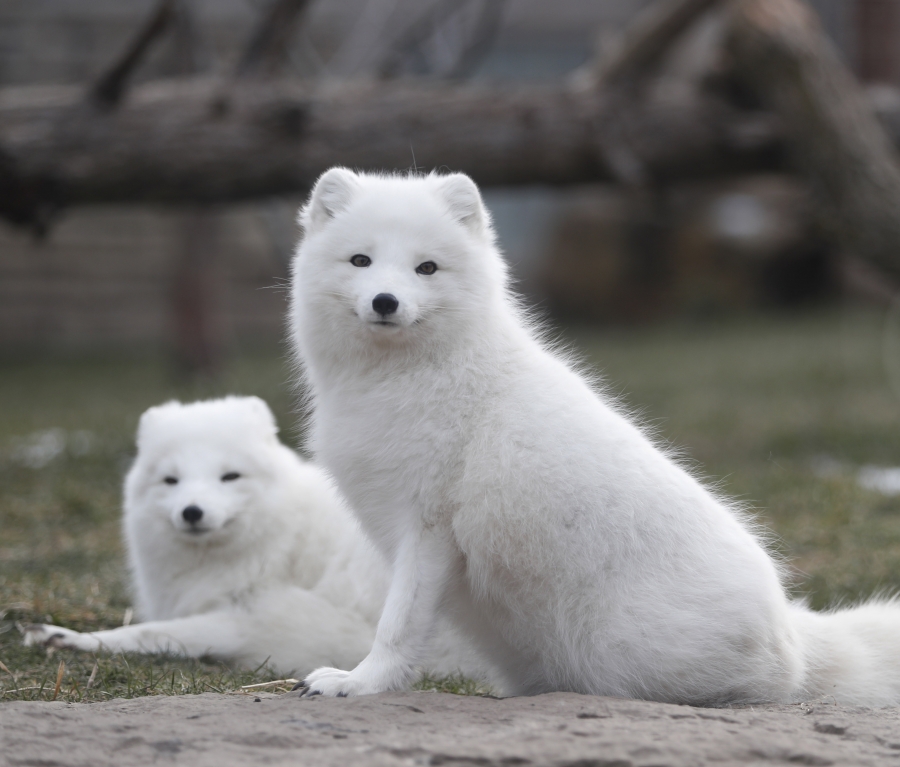 Also found in Arctic Edge are arctic foxes, a pair of bald eagles (each taken in from Upstate New York) and Canadian lynx. The arctic foxes, with their dense fur and white tones (all but one is white), blend in with the colors of winter. Like small pets, these fluff balls – along with the lynx – walk the grounds near the polar bears.

All of these animals can be still as statues, much like the zoo’s reindeer who laid across from each other in silence during my visit. It's the opposite of the zoo’s macaques – aka snow monkeys – who occasionally let out abrupt “woo’s” as visitors walk by. 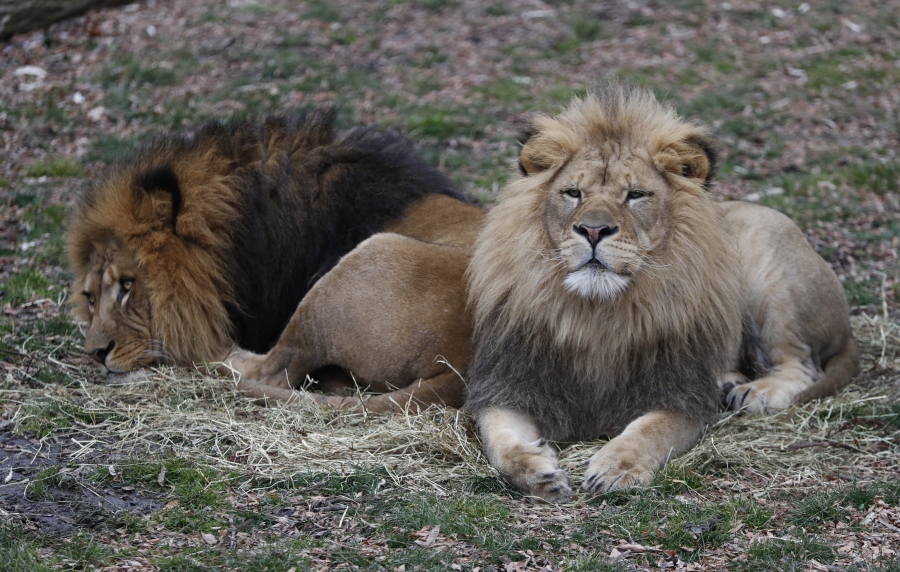 African lions Tiberias, left, and his son Roary, are adapted to Buffalo weather and able to spend some time outside in the winter. (Sharon Cantillon/Buffalo News)

These big cats are “adapted” to chilly weather so they spend time outside in the winter. When it gets down into single-digit temps they're only out for limited time to play in the snow before returning inside to their insulated homes. Roary and his father, Tiberius, are just a few of the lions seen lying majestically on the zoo grounds.

Toni isn’t the only new animal getting used to Buffalo’s winter for the first time.

Tashi, the Indian one-horned rhino, gave birth to baby Mohan in June 2019. Dobosiewicz said rhinos get access to their outdoor exhibit throughout the day during the winter. Much like the lions, if they get cold, they can go back inside to their enclosed homes.

Mohan doesn’t seem to mind the outdoors, though, skating across mud like a Buffalo Bisons player sliding into home. Mohan’s growing size isn’t a barrier to his playfulness, either, as he likes to roll around and trot across his grounds like a horse.

Once there’s layers of snow on the ground, Dobosiewicz said Tashi likes to plow the snow with her head down.

Country boys and girls who miss a taste of home can stop by this structure, a rebuilt farm from the 19th century.

Inside, the historic building’s interior presents a tranquil assortment of animals, including a mule and a couple of chickens. An occasional moo from the farm’s cow can disrupt the serenity but the adjacent, mellow sheep help offset the loudness.

The farm is an escape from the feeling of traditional zoos and an easygoing break from the cold as you make your way around. 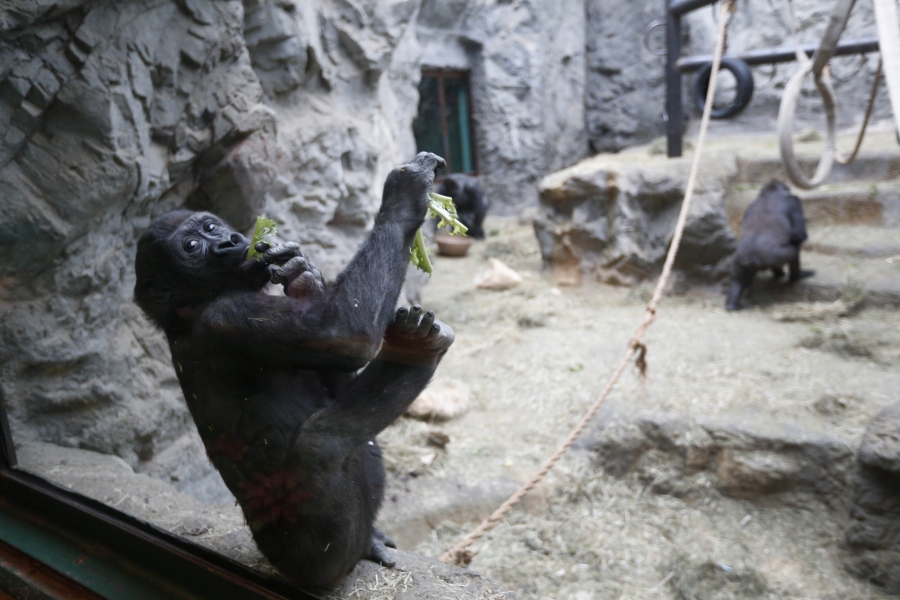 Kayin, a 4-year-old male, enjoys some greens. He is the youngest gorilla at the Buffalo Zoo. (Sharon Cantillon/Buffalo News)

Warm up with indoor exhibits

After catching up with a number of arctic pals, it's time to visit some of the enclosed areas that are a joyful escape from the cold. The Gorilla House and the Donna M. Fernandes Amphibian and Reptile Center bookend a u-shaped area that includes the EcoStation.

In the Gorilla House, western lowland gorillas hop around, including the male silverback Koga, who can give you a nasty eye if you look at his family. Kayin – a happy male gorilla – hopped up near the viewing glass to lift his foot and eat a handful of lettuce.

The renovated reptile and amphibian center includes snakes, poison dart frogs and a Komodo dragon, all of whom are accompanied with dazzling digital displays.

In another area of the zoo, the enclosed Rainforest Falls – kept at a comfortable 78 degrees – can transport you to a treasure trove of animals native to South America. Colorful birds fly overhead while black howler and black-capped squirrel monkeys climb the branches that encompass the exhibit. Cap off your zoo tour at the exhibit’s two-story waterfall, which can take you beyond the dull tones of winter to a piece of paradise in Buffalo.