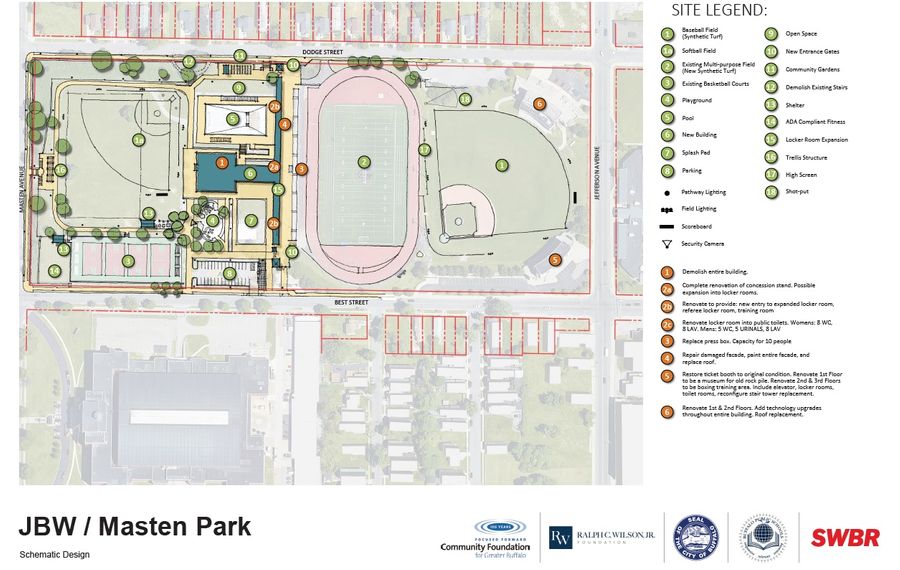 For years, the complaint was that athletes in the Buffalo Public Schools practice and compete on inferior playing fields compared to those of their suburban opponents.

Now, the school district and the city are eyeing more than $80 million in improvements at nearly a dozen neighborhood parks and school athletic facilities around the city in an effort to get more use out of them and advance the school system’s athletic program.

The upgrades – ranging from new fields to new lighting to new bleachers and scoreboards – would be a "generational" investment in the district's sports teams, said Will Keresztes, chief of intergovernmental affairs, planning and community engagement for the school district.

"The completed project will represent equitable access to highest-quality sports facilities in every Buffalo neighborhood," Keresztes said. "That's the legacy this exciting work will provide for our students and neighbors."

Now comes the tricky part: How to pay for it?

It's up to the city and school system to come up with a plan and the funding. That would likely include a request to the Ralph C. Wilson Jr. Foundation and other philanthropic organizations, as well as exploring aid from the state and pooling available resources.

"It is the first step of the planning effort," said Andy Rabb, Buffalo’s deputy commissioner of public works, parks and streets. "We are looking to continue to coordinate planning efforts, refine facility design and develop an implementation strategy, as there are no funds currently allocated for any of the improvements." 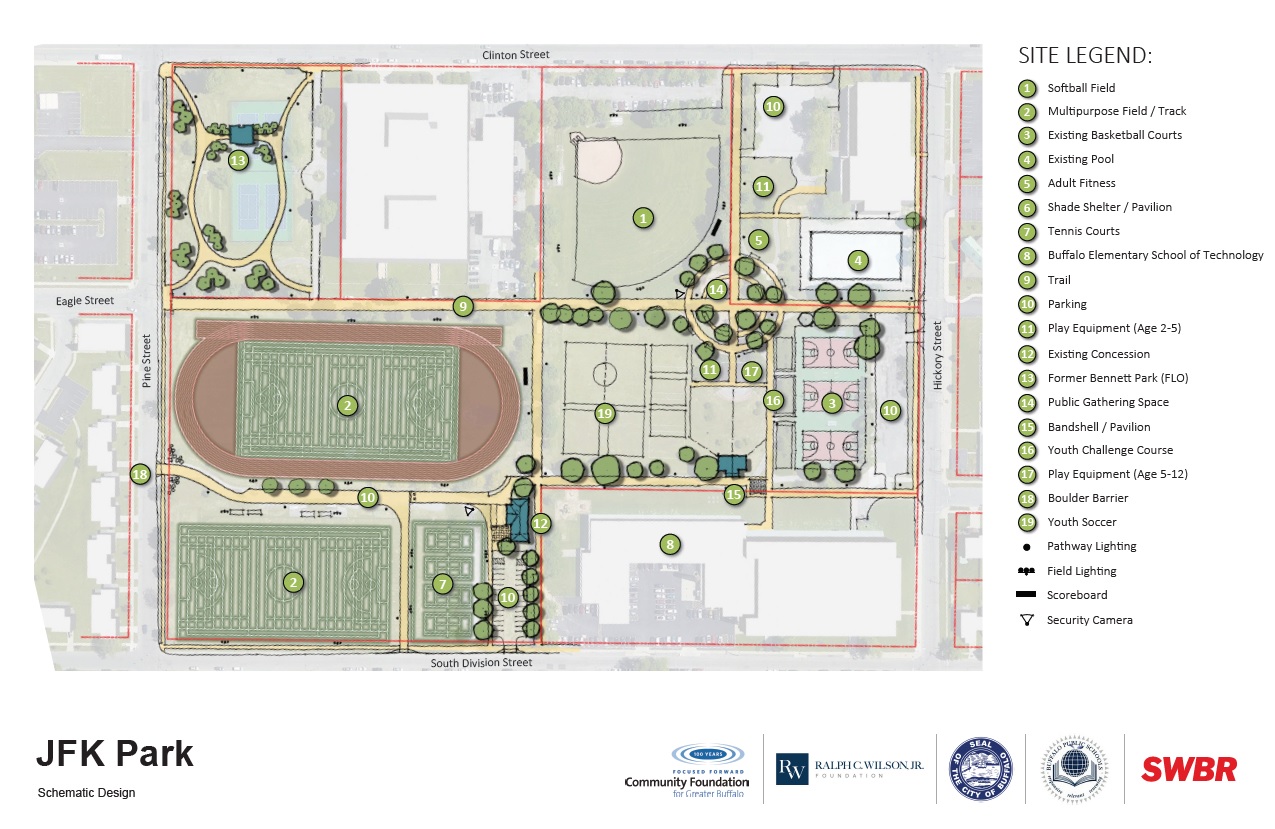 A schematic design for JFK Park on Hickory Street. (SWBR)

Buffalo Public Schools has been trying to elevate all aspects of its athletics program, but to keep pace with its suburban competition officials believe better fields and facilities are needed.

Schools spending big to compete for best field, not just on field

The Wilson Foundation paid $360,000 for a planning study conducted by SWBR Architects of Rochester, which has released its detailed report recommending what should be done at each of the six neighborhood parks and five district athletic facilities.

The project calls for either updated or new multipurpose fields at each of the 11 sites. That includes new synthetic turf for All-High, Riverside, Grabiarz and Johnnie B. Wiley.

Upgrades would be extensive at McCarthy Park, where there are football, soccer, baseball and softball fields.

At Waterfront, four multipurpose fields would be included. 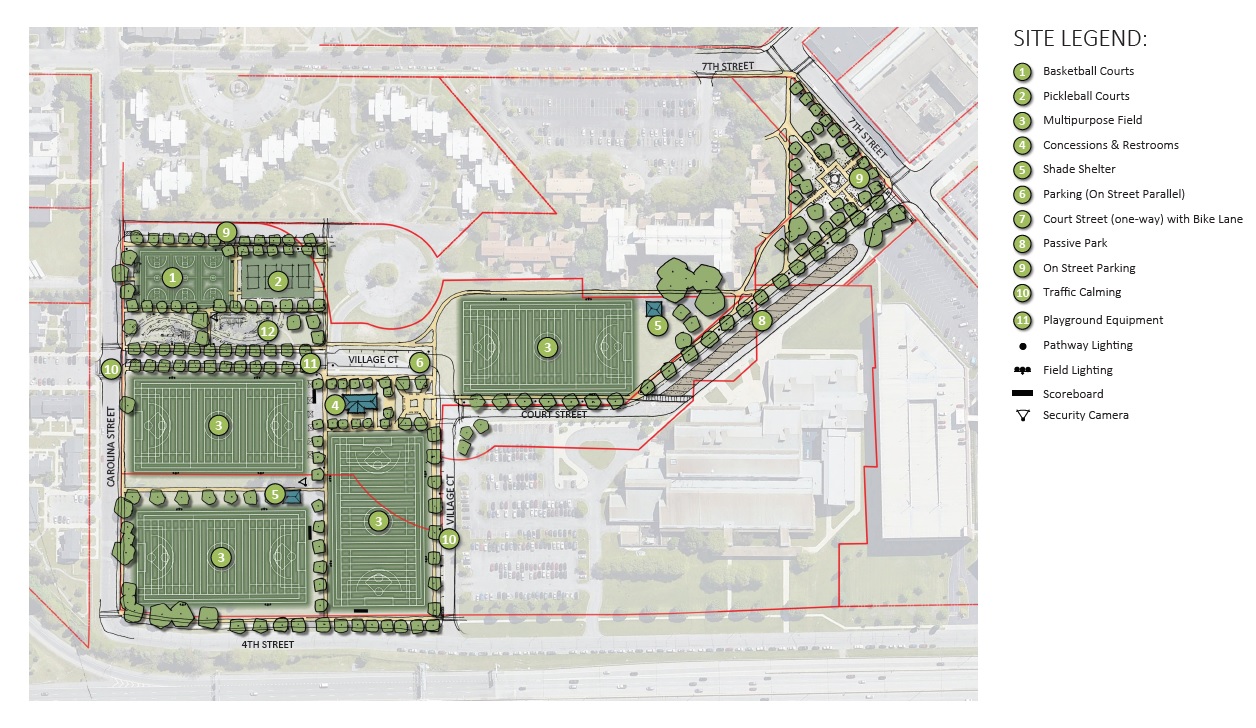 "I think it's a very realistic project," said Paul McDonnell, director of facilities, planning, design and construction for the school district. "It's going to make these sites so much more usable."

Besides upgrades to the fields, the study recommends dozens of other enhancements and amenities, including new field lighting; new synthetic running tracks at All-High, JFK and Mungovan; expanded locker room facilities at Johnnie B. Wiley; new bleachers and scoreboard at MST; new playground equipment at Grabiarz and Waterfront; and updated concessions and restrooms, among other proposals.

The recommendations were made based on public feedback during community meetings held at the end of 2018, said William Price, a landscape architect and project manager for the SWBR study. 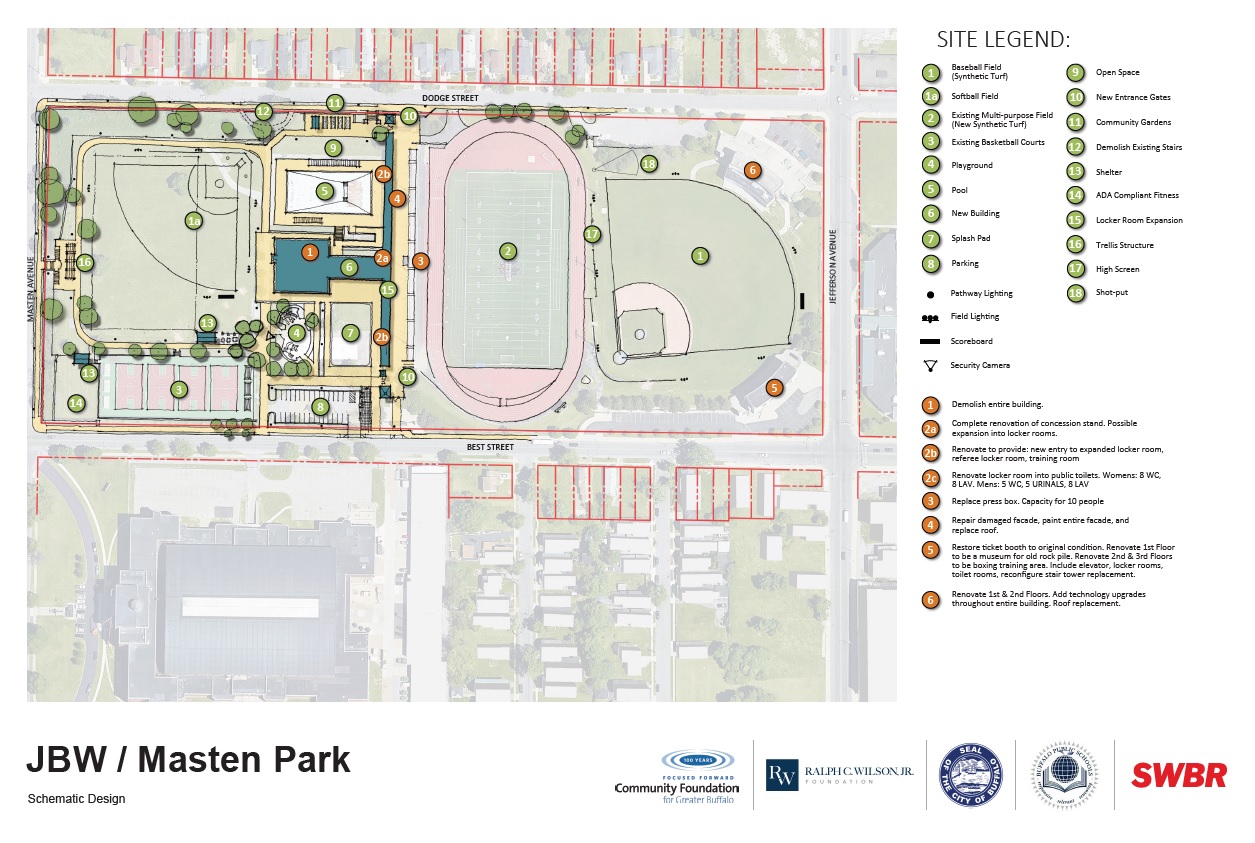 While the goal wasn't to completely redesign the parks and athletic venues, the public wanted basic amenities added and the ability to use the 11 sites more often – longer in the day, earlier in the spring and later into the fall, Price said.

"That was pretty much our mission,” Price said, “to do a wholesale upgrade.”

The total cost of the project is estimated at $60 million to as much as $82 million, when accounting for contingencies, according to officials familiar with the project.

"Those are preliminary numbers and they will likely change as we review the projects," Keresztes said.

The sizable sticker price would likely force improvements to be phased in over time.

“I think that could be a logical approach,” said Jean McKeown, vice president for community impact with the Community Foundation for Greater Buffalo, which has helped the city and school district coordinate the study. “It is a fairly significant price tag."