Remember the 2014 NHL Draft? To say it was devoid of top-end talent would be an understatement. The Buffalo Sabres managed to grab at least one of the big names draft eligible that year in Kootenay forward Sam Reinhart at second overall, sandwiched between Barrie’s Aaron Ekblad and Prince Albert’s Leon Draisaitl.

Five years later, the 2014 draft class has been somewhat underwhelming. For frame of reference, 59% of players drafted that year have never played in an NHL game – that’s nine percentage points worse than the prior year’s draft class, and five percentage points worse than the subsequent (and one year younger!) draft class. And it’s not just the class at aggregate – some of the bigger disappointments for the 2014 class came in the key areas of the first round, with Sam Bennett (fourth overall), Michael Dal Colle (fifth overall), Jake Virtanen (sixth overall), Nick Ritchie (10th overall) Brendan Perlini (12th overall) and Julius Honka (14th overall) going in the top half.

But teams did find value later in the draft. It started with Boston’s brilliant selection of David Pastrnak at 25th overall, and continued into the later rounds with Tampa Bay grabbing Brayden Point (79th overall) and Nashville finding Viktor Arvidsson (112th overall). Ondrej Kase (205th overall) going to Anaheim looked like the one late-round player who would be a difference maker, too – at least until the emergence of Sabres seventh-rounder Victor Olofsson.

Olofsson, 24, appears to be a late-blooming weapon for a Buffalo team in dire need of more scoring talent. In his first NHL season, Olofsson has 16 goals and 19 assists in just 42 games. For players with at least 48 games played (Olofsson’s career total), he’s the fourth-leading scorer in the class behind Draisaitl, Pastrnak and Point.

Olofsson is sidelined five to six weeks with a lower body injury after getting hurt Jan. 2 against Edmonton.

One of the common refrains about Olofsson is that his surprising performance is largely a byproduct of Jack Eichel. There is absolute truth to the fact that Eichel is elevating the play of his teammates, which is why on a decent team, he would be at least an outside contender for the Hart Trophy. But it’s also true to point out that Olofsson is scoring at a rate consistent with other Eichel regulars – Eichel regulars that have generally been successful top-nine forwards for years in the NHL. 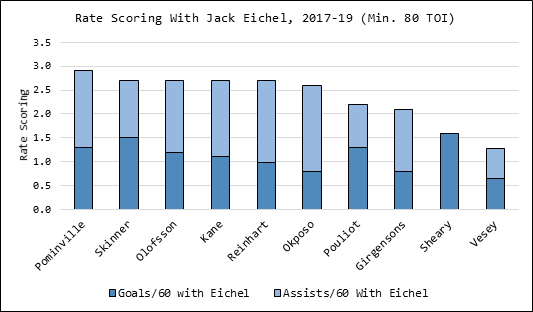 Olofsson compares better than most forwards through the first half of the season offensively – some of it is driven by shooting percentage, but Olofsson has made the most of the minutes he has played on Eichel’s line. His scoring compares nearly identically to the likes of Evander Kane and Sam Reinhart, and to a lesser extent Jeff Skinner – Skinner was more of the trigger man on the Eichel line, whereas Olofsson has a touch more of a distributor role.

Scoring, of course, isn’t everything. We need to separately understand how the run of play is when Olofsson is on the ice, if only to understand the equally important role forwards have as defenders on the ice. Most measures, like Evolving Hockey’s regression-based Goals Above Replacement model, see Olofsson as a negative contributor defensively. That’s not surprising for a first-year NHL pro, but it’s something that is worth noting as we talk about Olofsson’s long-term projections. (Conversely, other Eichel linemates like Kyle Okposo and Conor Sheary have had favorable defensive impacts during the 2019-20 season.)

Still, this is an encouraging first step for the organization and the player. Any time you stumble upon a fringe NHL player that late in a draft class, it’s a win. And Olofsson might still have holes in his game, but he has exceeded offensive expectations. Coach Ralph Krueger’s decision to split Skinner and Eichel might still be suboptimal when it comes to maximizing the entire lineup, but at the very least the organization knows that they might have stumbled upon another weapon. Olofsson might not stay forever on the Buffalo top line, but he should solidify a role in the lineup for the future.