Investigating a restaurant with a huge menu is like solving a mystery. Tips from informants, clues gleaned from staff past or present, a found photograph that proves to be worth 1,000 words and more – those can all prove useful.

All too often, though, especially with new places, it’s more like a game of Battleship.

I only have so many shots to fire – and the suspense builds until the dishes land and we dig in. Misses are dismissed, but hits can be bracketed to home in on the heart of the matter.

House of Gourmet, a new Chinese place in a slice of strip mall formerly occupied by forgettable Asian efforts, didn’t look like a target-rich environment at first. When my shots started landing, though, it was like shooting fish in a barrel. One of which was making its Tonawanda debut: a squirrel-shaped whole fish, a dish invented for the sixth emperor of the Qing Dynasty.

The tables have insets for hot pot even though it’s not on the menu, because the last guy gave the new owners a deal. Bump the undercarriage like me, and you’ll spill everyone’s tea. Alcohol is not served, nor are there plans to offer any. In a room lined in fake brick and steampunk light fixtures, owner Xiuying Xu and her son Bowen Su are offering Chinese culinary treasures for the ages.

That squirrel-shaped fish ($24.95) is a deboned sea bass cleverly crisscrossed with cleaver incisions so that when it’s deep-fried it puffs up with a sort of shaggy-looking exterior. Tip the head up so the mouth resembles ears, cock the tail and you might be surprised how much a fish could resemble a gliding flying squirrel.

Covered in straightforward ketchup-and-vinegar based sweet and sour sauce, with peas and diced carrots, it’s a crunchy, fun dish that’s older than the United States. 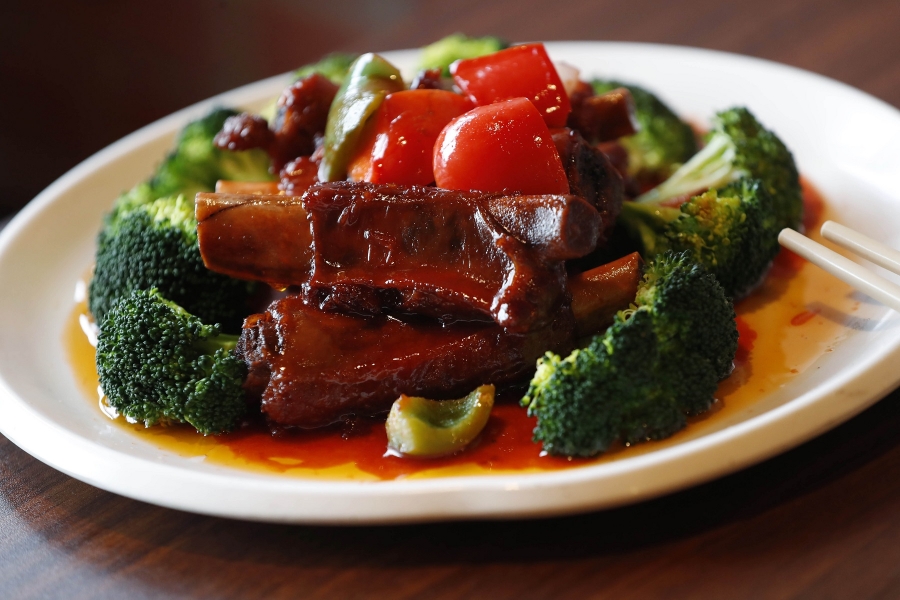 Bad news: You’ll need to order it three days ahead of time.

Good news: That means House of Gourmet isn’t just pulling a fish out of the deep-freeze.

Great news: There’s so many other good things to eat you can leave that to the trophy hunters.

Let’s talk about smoked tea duck ($15.95), a Sichuan dish I had only read of before. Marinated whole ducks are dried, smoked briefly over tea, sugar and camphor, then fried to a crisp and hacked up with a cleaver. 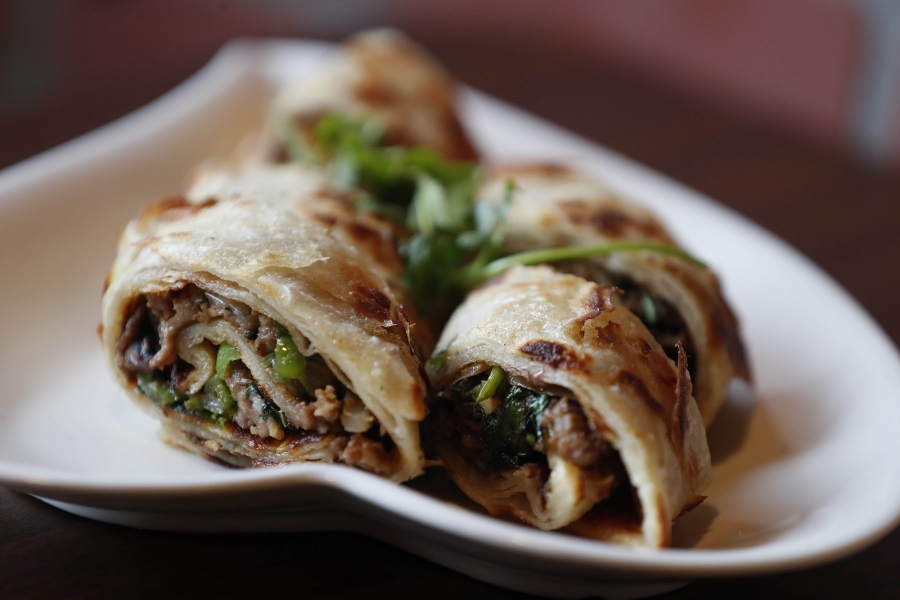 The result is like fine-grained Asian barbecue, lush meat against partly rendered fat, with areas of smoky-sweet skin crispy as Pringles. Even when it’s softer, it’s gnawingly delicious, and a dish of dark hoisin-and-wine dip adds levels of aromatic fruit.

If you’re feeding a crowd that likes chile-fired seafood, consider putting the spicy grilled fish ($31.95) on the table. This forearm-length deboned bass has been fried to firm it up, then submerged in an intense bath of chile oil, broth and spices including the mildly numbing Sichuan peppercorn. Heaps of toasted dried chile peppers add more aroma, while cilantro and peanuts add crunch. Spooned out over bowls of rice, it can feed six.

Paper-thin ribbons of fresh bacon, wokked up to a tender toothsomeness with lots of leeks, are what comes when you order young garlic shoot with fried handmade bacon ($13.95). No one who I shared it with complained about the switch. Next time, I’ll pair it with the scrambled egg and tomatoes ($8.95). 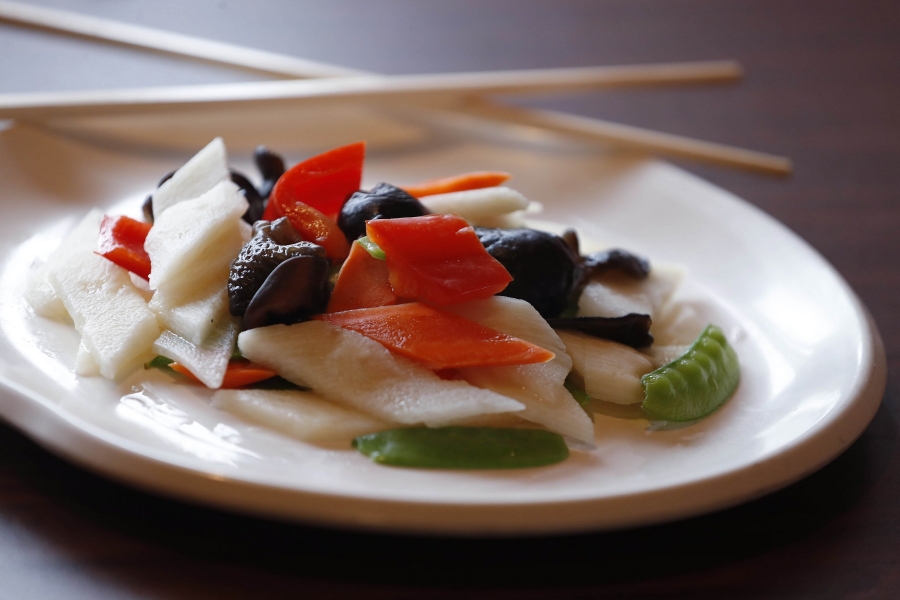 Vegetable enthusiasms included celery with cashews ($9.95), with the fibrous stalk starring on its own with toasty nuts, minimally seasoned but maximally crunchy, its slight astringency a pleasant foil to heavier fare.

Stir-fried cabbage with chili sauce ($10.95) also has pork for flavoring, and a tender-crunchy character that makes it the best argument to eat a whole pile of cabbage that I’ve seen lately.

Perhaps you’ve had scallion pancakes, multilayered savory flatbreads with green onions. Here they also come stuffed with spicy, smoky, stir-fried meat alive with cumin, garlic and chile, cut in fat slices like a Sichuan jelly roll. Beef and pork, sure, but the lamb’s ($10.99) huskiness made skipping it a bad idea. 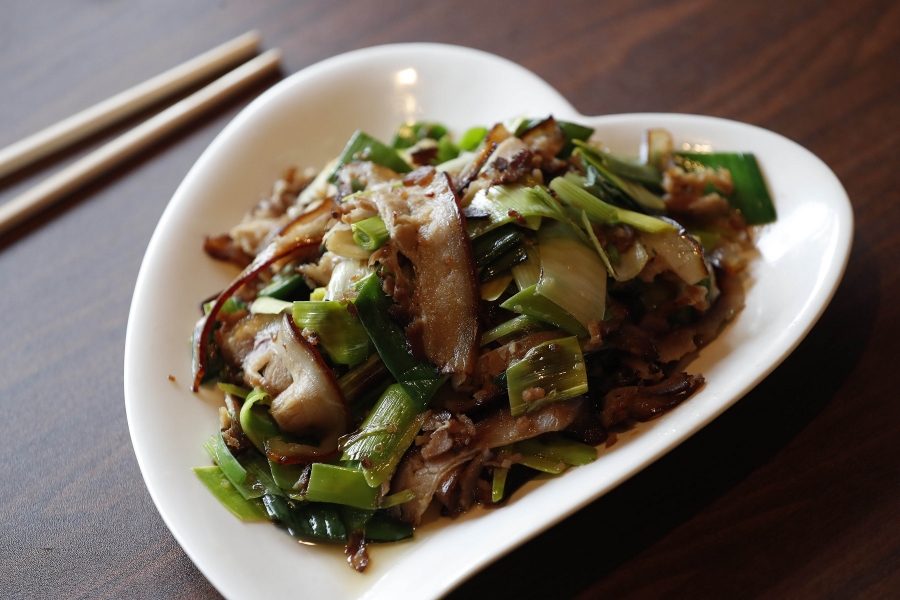 Maybe another time I’ll tackle the spicy pork intestines with frog ($24.95) or spicy pork feet ($10.95). But I can report that the duck’s blood, beef and tripe in chili sauce ($16.95) was loaded with beef, ham, bean sprouts, pork, cabbage and a few chocolate-bar-like slabs of gelled blood, which taste like liver Jell-O.

Seven kinds of dumplings, including some rarities (beef and carrot, chicken and leek), are good to excellent. Fish and Szechuan pickle soup ($11.95) is tangy, mild and comforting.

Much more bears investigating. Going forward I’ll try to find more hits, but the Chinese have a 1,000-year head start. It’ll take me time to ketchup.