A man who was killed in a one-car crash Monday afternoon in Genesee County after he twice sped away from law enforcement apparently had ties to a nationwide theft organization known as the Felony Lane Gang, according to The Daily News of Batavia.

Cleveland D. Johnson, a 22-year-old from Lauderdale Lakes, Fla., who was the driver of a car that crashed into a tree in the Village of Alexander, was arrested two years ago in Westchester County, The Daily News reported.

When Johnson and three others were arrested in Greenburgh in January 2018 on charges of criminal possession of stolen property and other charges, Greenburgh Police said the four were believed to be part of the Felony Lane Gang. The pattern of the gang, which began in Florida and has been in operation in several states since 2004, typically involves the theft of purses from cars with thieves using the stolen IDs, checkbooks and credit cards for further fraud.

The name of the gang stems from the furthest drive-thru lane away from a bank – those committing fraud with stolen IDs or checks use that lane to better obscure their identity.

The Felony Lane Gang has had its activities reach Western New York. In January 2019, West Seneca Police told WGRZ-TV that the group was suspected in a theft in which a woman's purse was stolen and then female thieves used her information to withdraw money from different banks throughout the state.

In April 2017, police foiled an attempted fraudulent drive-up withdrawal at a West Seneca bank – from the "felony lane" – based on information thieves gained after stealing a woman's purse in Syracuse.  In June 2014, Erie County Sheriff's deputies arrested a Florida woman and a New York City woman they said were part of the Felony Lane Gang after fraudulent documents were attempted to be used for a withdrawal at an Elma bank. 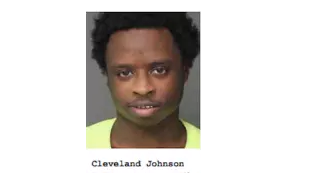 Cleveland Johnson, seen in a 2018 photo, was killed in a one-car crash Monday. (Greenburgh Police)

In the crash that killed Johnson, two other passengers in the car were seriously injured, the Genesee County Sheriff's Office said.

After the crash on Route 98, Clyde A. Frazier, 24, of Fort Lauderdale, Fla., was taken by Mercy Flight helicopter to Strong Memorial Hospital in Rochester. Transported to Erie County Medical Center by Mercy Flight was Desarae N. Steriotis, 33, of Philadelphia, Pa.

Deputies said that Johnson's vehicle, a 2019 Chrysler 300 with Pennsylvania license plates, was first noticed by authorities on Route 19 in Warsaw of Wyoming County, where Warsaw Village Police attempted a traffic stop for speeding. However, as the officer approached the car, Johnson sped away from a pursuit and Warsaw Police would lose sight of the car.

The Chrysler was then spotted heading north on State Route 98 in Attica, where Attica Police attempted to pull the car over but again Johnson sped off, and Attica Police ended the pursuit due to the high speeds involved.

The investigation by the Genesee County Sheriff’s Department is ongoing.