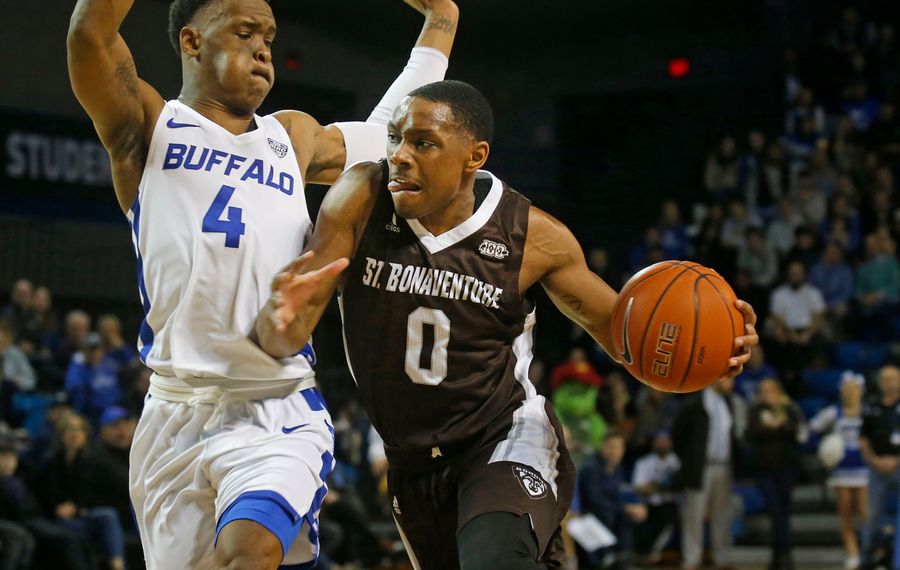 In the World War II era, Illinois had a team of young basketball standouts who took college basketball by storm. They became known as “The Whiz Kids.”

Those Whiz Kids of long ago had nothing on the present day St. Bonaventure team. Coach Mark Schmidt’s lineup of four sophomores and freshman Justin Winston is off to a 3-0 start in the Atlantic 10 Conference.

The other starters are sophomores Kyle Lofton, Dominick Welch of Cheektowaga, Jaren English and Osun Osunniyi. The only senior on the roster is backup center Amadi Ikpeze from Amherst.

The Bonnies will be looking for win No. 4 when they face Massachusetts on Wednesday in their annual visit to Rochester’s Blue Cross Arena.
Bona (11-5, 3-0 Atlantic 10) and UMass (7-9, 1-2) will meet in the Alesco Advisors Roc City Hoops Classic at 7 p.m. Bona has won the last six times at Blue Cross Arena, The Bonnies also have won seven in a row against the Minutemen. The last UMass win in the rivaly was 55-53 at the Reilly Center in 2015.

Bona has won 10 of its last 11 games, seemingly getting gradually better as the time since 6-foot-10 center Osunniyi’s knee injury increases.
Osunniyi missed all but 11 minutes of the Bonnies’ first five games in which they were 1-4. He returned for a 56-51 win over Mercer on Nov. 26 and Bona is 10-3 with him back in the lineup.

Bona is one of three teams in the Atlantic 10 with undefeated records in conference play. Duquesne and Dayton are 4-0.

The schedule gets tougher, though. The Bonnies will have road games at VCU on Saturday and Dayton on Jan. 22. Both teams usually contend in the A-10.

UMass has a young roster, too, with just two seniors and one graduate student. None start. Tre Mitchell, a 6-9, 240-pound freshman center from Pittsburgh, leads the Minutemen in scoring at 14.8 ppg. He played with two other UMass freshmen, T.J. Weeks and Preston Santos, at Woodstock (Conn.) Academy.

Freshman Dyaisha Fair, who sat out Saturday’s 76-65 loss at home to Ohio for violating team rules, is listed in the University at Buffalo’s projected lineup for Wednesday’s 7 p.m. Mid-American Conference game against Bowling Green (7-8, 0-3 MAC) at Alumni Arena.

Fair is fifth in the nation in scoring among NCAA Division I players with a 23.1 average. Jessika Schiffer, a freshman from Germany, started in Fair’s place against Ohio and scored 14 points.