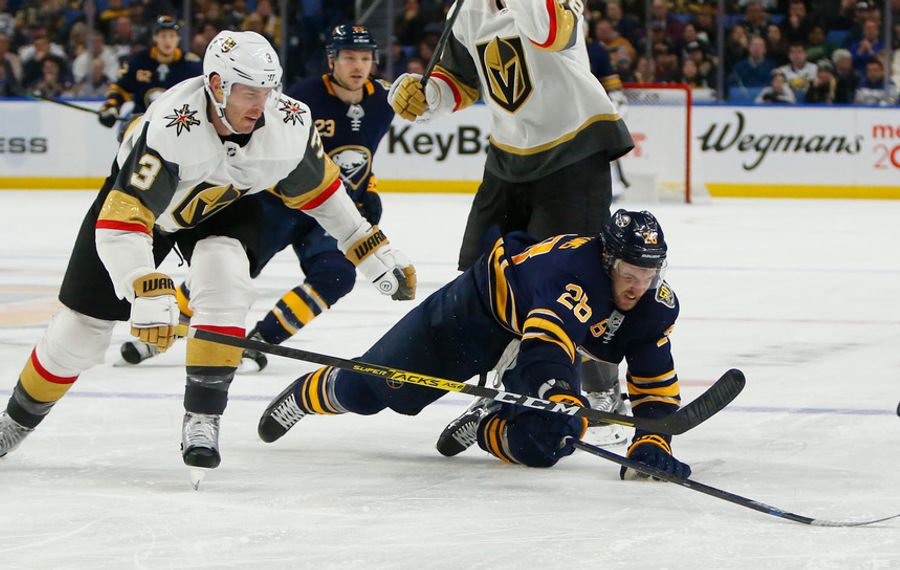 Jack Eichel scored the go-ahead goal on a two-on-one rush with Zemgus Girgensons, who skated on the top line for the third consecutive game in the Buffalo Sabres’ 4-2 victory against the Vegas Golden Knights on Tuesday night at KeyBank Center, the team’s final home game before the All-Star break.

“I know I had Z coming with me there … ” Eichel said, describing his career-high-tying 28th goal of the season, which gave the Sabres a 3-2 lead with 12:03 remaining in the third period. “I kind of saw (Marc-Andre) Fleury cheating a little bit on the pass, so I just tried to tuck it in the short side.”

Girgensons had scored in each of the first two games since his promotion, and his consistent grit and determination have helped to establish the veteran forward among the team’s top options for filling in for the injured Victor Olofsson, who led all NHL rookies with 16 goals and 35 points when he suffered what is believed to be an ankle injury during a 3-2 overtime victory against the Edmonton Oilers on Jan. 2. Olofsson is expected to miss another three to four weeks.

“It’s a little confidence boost to be up there,” Girgensons said. “At the same time, it’s a little pressure to do well and stick around maybe. We’re down a couple of bodies and we’ve had multiple guys going in and out, so it’s been a great opportunity for any guy in the room.”

The Sabres experimented with Jimmy Vesey and Kyle Okposo on the top line, alongside Eichel and Sam Reinhart, before Girgensons earned an opportunity.

“It’s important that he keeps his feet moving,” Sabres coach Ralph Krueger said. “When he’s skating, he’s a force and he makes a difference in both directions, and that’s what we like about him is he generally is always giving it all and I cannot think of very many moments when he’s not trying as hard as (possible). If you do that as a group and make mistakes, you get away with those mistakes. If the work ethic isn’t there, you don’t. The league is too good for that.

“He’s a player where you know what you’re getting every day. And you need a core of those in every team, and if you have those, that’s where you kind of build the heart of the team. And out of that, you can then find moments for skill and moments for cohesiveness offensively. He’s one of those centerpieces, work-ethic wise.”

The 6-foot-2-inch, 211-pound forward scored in each of the Sabres’ previous two games, including his seventh career shorthanded goal on Sunday at Detroit.

A point against Vegas would have given Girgensons his longest point streak since he tied a personal best with points in three straight games from Dec. 23-29, 2017.

Girgensons has never scored a goal in three consecutive games in his NHL career.

Okposo and Reinhart each scored on the power play Tuesday, before Eichel netted the game-winner. Curtis Lazar added an empty-net goal in the final minute of play.

“I don’t think my game changes if I’m first line or fourth line. I play the same way. I do my work,” Girgensons said. “The goal scoring comes after I focus on just doing my job in the game and playing my game.”

Girgensons’ eight goals tie for the second-most in a season in his career.

Girgensons entered Tuesday’s game with a career-high 14.3 shooting percentage, having scored on two of his previous three shots. He scored an even-strength goal in Saturday’s 6-3 loss against the Vancouver Canucks and a short-handed goal in Sunday’s 5-1 victory at the Detroit Red Wings. It was his first short-handed goal since the 2017-18 season. But the scoring is a bonus.

“Girgensons is just such a team player insofar as what’s the role that’s being asked and what do I need to do and how can I do it?” Krueger said. “He’s very passionate in doing what the team needs, whether it’s in a penalty-killing role or whether it’s supporting Eichel and Reinhart in a role where he needs to add grit to a pair that’s as dynamic as any in the league.

“So his ability to do that, because of his attitude and his passion, he’s a fun player to coach and an important character player to have on the team. He’s willing to finish hits, get in shot lanes and just be there for the team.”

Girgensons is second on the team in hits, behind only Rasmus Ristolainen.

“My forecheck can help them create some space and with their skill level, they’re just easy, fun to play with,” Girgensons said about playing alongside Eichel and Reinhart. “It’s an easy spot to be in. They’re both great players and you’ve just got to bring that hard work for them and good things will happen.”

In addition to Olofsson, the Sabres are without forwards Tage Thompson (shoulder) and Vladimir Sobotka (knee), who are out for the season, and Jeff Skinner (shoulder), who remains sidelined for the foreseeable future.

“Victor Olofsson is as good as it gets,” Krueger said, when asked the ideal player to complement Eichel and Reinhart. “That was for sure an elite line in the National Hockey League, and it’s difficult for anybody to fill that spot. But we get different looks with different people going in there now. The ideal person is Victor Olofsson.”