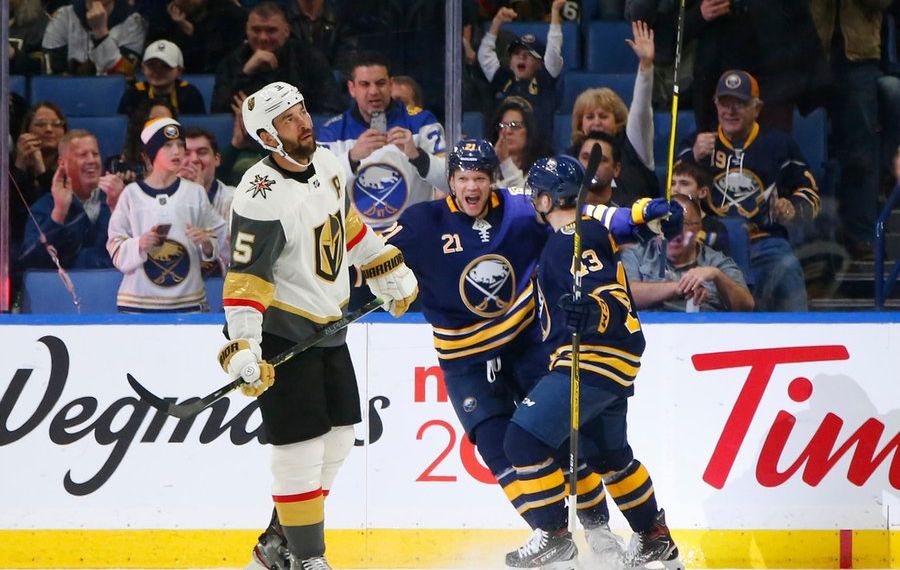 And suddenly, the Buffalo Sabres have a little bit of a roll going again.

Jack Eichel's goal off a spectacular solo rush with 12:03 to play Tuesday night snapped a tie and gave the Sabres a 4-2 win over the Vegas Golden Knights before 18,257 in KeyBank Center. Buffalo has won two straight since Saturday's third-period collapse against Vancouver and is 4-2 in its last six games.

On a 2-on-1 break with Zemgus Girgensons, Eichel cut around Vegas defenseman Shea Theodore and fooled Marc-Andre Fleury with a short chip shot when the goalie was cheating to his left to play a pass or a cut through the crease.

It was Eichel's 28th goal of the season, tying his career high set last year. Vegas pressed for the tying goal but Curtis Lazar hit the empty net with 24.3 seconds left.

The Sabres had a 2-1 lead through two periods but Vegas tied the game on Reilly Smith's power-play goal at 1:43 of the third. It came seven seconds after a double-minor on Buffalo defenseman Colin Miller, who was nailed for tripping and took an unsportsmanlike conduct penalty on top of that.

Breaking the ice: Vegas scored first on Tomas Nosek's fluky goal at 1:55 of the second. Chandler Stephenson worked the puck into the Buffalo zone around Rasmus Dahlin and his backhand to the crease went through Brandon Montour, off Nosek's skate and into the empty net as Linus Ullmark overplayed the pass.

Getting even: Kyle Okposo tied it at 6:32 with his fifth goal of the year, whipping home a wrist shot after taking a pass from Sam Reinhart that came right after a Conor Sheary steal just inside the Vegas line. It was Okposo's first power-play goal of the season after collecting 20 for Buffalo over the last three years.

Its nice to see Buffalo cause a turnover and capitalize on it. Good work by Sheary. Okposo nets one. 1-1 #Sabres50 #VegasBorn pic.twitter.com/Gm3CmN79yQ

Getting in front: Vegas took a too-many-men-on-the-ice penalty with 45.5 seconds left in the second period and the Sabres capitalized on Reinhart's 16th goal of the season, a snapshot from the slot after a quick feed from the edge of the crease by Rasmus Ristolainen.

Picking away at the Flower: Fleury, a former 2003 No. 1 overall draft choice and three-time Stanley Cup champion, entered the game with a career mark of 22-6-3 vs. Buffalo during his days with Pittsburgh and the Golden Knights.

Visitors survive the first: The Sabres controlled much of the play over the first 20 minutes, holding Vegas without a shot on goal for 7:05 and finishing with a 13-4 advantage. But neither team scored and that actually rated as a big victory for the Golden Knights. Vegas has been outscored 10-0 in the first period of its last five games. It went 1-3 in the first four.

The lineup: The Sabres used 11 forwards and seven defensemen in the game, with former Vegas blueliner Miller getting back in the lineup for Buffalo against the team he played with during a run to the 2018 Stanley Cup final. The scratches were forwards Scott Wilson and Rasmus Asplund, and defenseman Zach Bogosian.

Miller on facing his old team: "It was a fun two years there. They're having another good year and it's good to see them but hopefully we can take one from them tonight. [Fleury] carried us for a while on that run. That's what a Hall of Fame goalie can do for you. It was a lot of fun."

Long time, no see: It was nearly 15 months since the Sabres and Golden Knights last met because both of last season's encounters were in October. The Sabres are 2-1-2 against Vegas, with the most recent meeting a 4-1 Golden Knights victory in T-Mobile Arena on Oct. 16, 2018.

Wild West schedule: This was the first of eight straight road games for the Golden Knights, a four-game trip prior to the bye and All-Star break and a four-game trip after. They don't play at home again until Feb. 8. The trips are long ones, as well, with seven of the eight games in the Eastern Conference and the only "West" game in Nashville.

Next: The Sabres will practice here Wednesday and then head south for their final two games before the All-Star break. They play Thursday in Dallas and Saturday in Nashville before their bye week and break. The next home game is not until Jan. 28 against Ottawa.