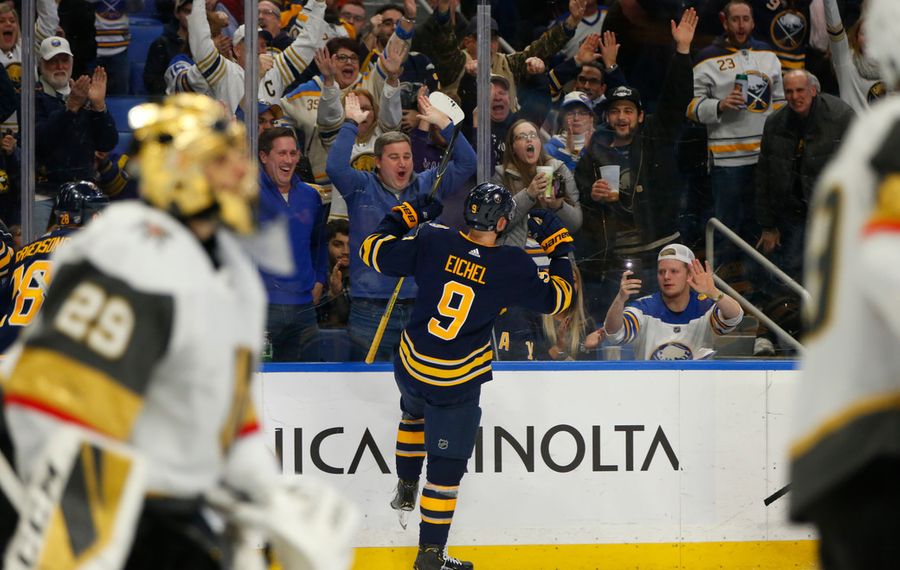 The Buffalo Sabres are still guilty of putting their following through some soul-sucking losses. Four-goal third periods against them at home in the last two weeks by Tampa Bay and Vancouver soured the fan base and left the team in a chase-the-season mode while waiting for General Manager Jason Botterill to do something to augment the roster.

But there's a clear sense that things are going in a better direction this year. Jack Eichel has emerged as the superstar everyone hoped he would be when he was drafted in 2015, and first-year coach Ralph Krueger has a different message for his players to help them keep the faith when times are tough.

The Sabres have won two straight again and are 4-2 in the new year after Tuesday's gritty 4-2 win over the Vegas Golden Knights in KeyBank Center. They won the game on Eichel's highlight-reel special at 7:57 of the third period that snapped a 2-2 tie.

And while that was the singular play that made the difference on the scoreboard, the players say Krueger's message keeps resonating at the most crucial times.

Sunday morning in Detroit, a hotel meeting room had the coach telling his troops the facts of hockey life after the Vancouver collapse compounded the 5-1 loss two nights earlier in St. Louis. They responded with a solid 5-1 win against a terrible Red Wings team. The Sabres struggled badly in the second period Tuesday against a much better opponent, emerging with a 2-1 lead thanks to Sam Reinhart's power-play goal with 18.5 seconds left, but Krueger wasn't happy.

The game got darker when Vegas tied it on Reilly Smith's goal at 1:43 of the third but the Sabres didn't crack. They are grasping the message of Krueger that they never believed in under Dan Bylsma or Phil Housley.

"The group just responds to Ralph so well and the message he delivers," said Eichel, whose goal tied his career high for a season at 28. "Especially after games like St. Louis and Vancouver where I think we get away from our identity a little bit and we don't do the things that make us successful, Ralph is able to hone the group in so well and get us to play the game we know we need to play to win. It starts with protecting our net and the house around our goalie. Transition well and play in their end.

"He's been so good at bringing us back, getting us all back on the same page and bought in. He kind of just hits the reset button. He doesn't carry his emotions over. Maybe he's mad at us for our performances here and there but he never carries it over. He just brings such a good attitude to the rink every day and it just flows through the locker room."

Veteran Kyle Okposo has been a Kruegerite since Day One of training camp and he's noticed the coach's large reset button as well.

"You just come to work and it's a new day. There's no moping around. There's no hard feelings," Okposo said. "If we have to watch clips the game before and learn from it, we do. And if we have to just move on and focus on what we have to do the next game, we will. It's a new day. You're going to lose games in this league but the positivity, just the vibe that he brings and the way that he speaks and motivates has been awesome for us this year."

"It's important that we are continually focusing on the habits that make us strong and give us a chance against top teams like Vegas," Krueger said. "I thought between periods we stayed quite calm but we were stern, we were angry and it was just about getting back to that. ... What I do is just keep the dialogue up with the guys, keep things honest, keep it real and have them also participate in the process."

And it doesn't hurt when you can put Eichel on the ice, even when he's having a tough night with the puck. All it takes is one play to turn things around.

Eichel made it on a 2-on-1 break with Zemgus Girgensons, going around defenseman Shea Theodore and then surprising goaltender Marc-Andre Fleury with a chip shot rather than a pass or a swooping move in front of the net. Fleury was expecting those two options as he cheated to his left and gave Eichel room to pounce.

"Their 'D' tried to step up and I tried to get it around him," Eichel said. "I kind of saw Fleury cheating a little bit on the pass so I just tried to tuck it in the short side."

Eichel has 28 goals – tied for third in the NHL – and 61 points, and became the sixth player in the league this season to have two point streaks of at least eight games. Combined with his 18-game personal run that ended just before Christmas, Eichel has points in 26 of his last 28 games.

"They're a veteran team. They don't give you a whole lot," Eichel said of the Golden Knights, who still have many of the players who appeared in the 2018 Stanley Cup final. "They check really well, they transition the puck well. You can tell those guys have obviously have had some runs in the playoffs. I give us a lot of credit for sticking with it and finding a way to get two points."