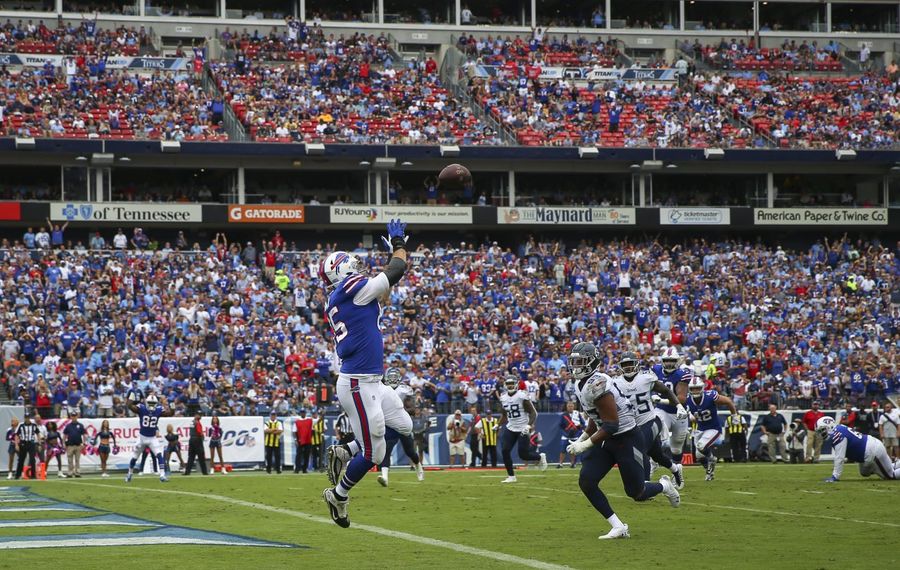 The Bills Mafia traveled well in 2019.

The Bills ranked third in the NFL this past season in road attendance, with an average of 71,579 fans at their eight games away from New Era Field.

That’s something that the team’s front office – and especially players – noticed.

“You go back to Nashville, Miami and Houston. Nashville, that game, that was like a bowl game,” General Manager Brandon Beane said. “It was their team does something good, you hear that side of the stadium. Our team does something good – it truly was like a neutral field. To have Bills Mafia, Bills nation support us all season long – it’s unmatched. I’m very appreciative, our players, our entire building. I know (owners) Terry and Kim (Pegula) are, as well.”

The Bills responded to the support, tying a franchise record with six road wins.

“I just think we had that mentality going into a road game – us against the world,” safety Micah Hyde said. “We go out the tunnel, getting booed, we all like that. We all got a smile on our face when that’s happening. It’s fun to play on the road, especially in hostile environments.”

Nowhere was the support more noticeable than in Nashville. Bills fans traveled to Tennessee in droves – the allure of Broadway didn’t hurt – and as Beane alluded to, had a major impact on the outcome.

“It sounded like a home game. It really did,” defensive tackle Jordan Phillips said. “It was loud. You see the other team’s heads go down, ‘like, what are we doing? Why are our fans not here?’ It doesn’t make you want to play.”

The Bills-Titans game drew a crowd of 66,910, Tennessee’s largest home game of the season.

“It brings down your confidence a little bit when you see that as the home team you’re playing against the crowd and the other team now,” Phillips said. “It evens the playing field so much, and that advantage you thought you had is gone so quick. It’s huge. It takes the air out of the room and makes the home team’s fans discouraged.”

The Titans, Browns, Dolphins and Steelers all drew larger home crowds than usual when the Bills visited.

“The cool thing about it is, we have our chants,” safety Kurt Coleman said. “It makes me think of a European soccer team. You know when you start hearing that Bills chant, ‘hey-ey-ey-ey’ it gives you a bit of extra energy. You know you’re not alone. It’s not a home game, but they’re there, rooting you on and pulling for you. It’s inspiring.

“As a player, you appreciate the fans that really travel well. I don’t take that for granted because I’ve been on teams where you don’t get that kind of support, and it’s like you’re out there by yourself. This franchise, this fan base, they’re always going to be there.”

Not only do Bills fans travel well, there also is a large number of displaced Western New Yorkers living elsewhere, particularly in the South.

The Bills were 12th in road attendance in 2018, averaging 69,150 for their eight road games, which were trips to Green Bay, Houston, Indianapolis, Minnesota and Baltimore along with the three AFC East opponents.

The Bills should expect some big road crowds again next season. Although there aren’t any cities within short driving distance like Cleveland and Pittsburgh, there is a return trip to Nashville, the annual trek to Miami – which has obvious appeal in the cold-weather months – and for those feeling more adventuresome, four trips to the West Coast for games against Las Vegas, Arizona, San Francisco and Denver. Bills Mafia and the Vegas strip just sound made for each other, don’t they?

For what it’s worth, the Bills ranked 16th in home attendance, with an average of 68,839 fans. That number is, of course, influenced by stadium capacity. The Bills were at 95.8% home capacity, and 95.3% road capacity.

Buffalo went just 4-4 in home games in 2019. Throw out the meaningless season finale, which was a loss to the Jets, and the other three losses were against division winners – New England, Philadelphia and Baltimore.

Nevertheless, the Bills will want to improve on that home record in 2020, especially with the road schedule shaping up to be more of a challenge.

“This is a tough place to play,” coach Sean McDermott said. “We have to play better. We had some close games here. … The New England game and the Baltimore game went down to the last drive, and the Philadelphia game was obviously a game that we didn't have a chance in the fourth quarter at the end. So that's a big thing for us, playing well at home and trying to capture the AFC East.”