When Krysten Schmidt visited her 89-year-old grandmother at a Batavia nursing home, an aide pulled her aside to say there were maggots on her grandmother’s foot.

Schmidt started to cry and wondered if maybe she misheard the aide.

Staff at Premier Genesee Center for Nursing and Rehabilitation later described the Sept. 25 incident to a state Health Department investigator in graphic terms. On Mary Ellen Sharp’s left foot, there was “something wiggling between her toes,” a nurse's aide told investigators.

The state cited Premier Genesee for violations related to the maggots but did not fine the nursing home.

Schmidt said that if it hadn’t been for the aide, she might never have known that maggots – fly larva that look like small worms – were infesting her grandmother’s leg wounds at Premier Genesee not only that day but also four days earlier.

Two nurses who responded to Schmidt’s demands for an explanation downplayed the maggots, the granddaughter said.

“My mother had just arrived for the visit and took off the shoe and sock and three or four maggots fell to the floor,” Schmidt said. "They proceeded to tell me the maggots were in her shoe and not her sock. I mean, does it really matter? Are maggots supposed to be anywhere? They were trying to downplay it.”

Later that same day, Schmidt said, she filed a complaint with the state Health Department, which initiated an investigation in early October.

An inadequate pest control program to prevent flies from entering and spreading maggots at the 160-bed nursing home was cited by the Health Department as the culprit.

The investigation found flies in residents’ rooms, a third-floor dining room, the main kitchen and elsewhere. Doors to the outside were ajar or too small, creating spaces for flies to enter. Screens were improperly installed, allowing for gaps, and bug light traps were not plugged into outlets.

The state cited other problems:

• An unsanitary situation occurred when a wound doctor, after treating one of Sharp’s wounds, failed to place a dressing on it. For hours, the wound was openly exposed, making it a target for flies.

• Officials at the nursing home failed to comply with a federal regulation requiring they immediately notify a physician and relatives when there has been a change in a resident’s condition.

• Breakdowns in communication among employees, ranging from the nursing staff to maintenance workers. 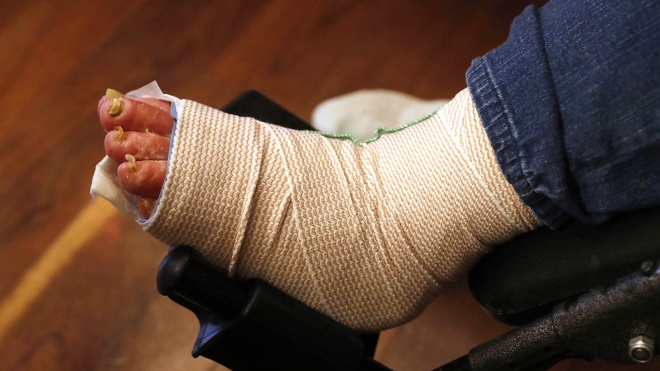 Mary Ellen Sharp's left leg is still bandaged because the wounds have not yet healed. (Sharon Cantillon/Buffalo News)

Heckler and two other advocates said it is rare for a nursing home in New York to be cited for maggots found on a resident.

"Needless to say, a maggot infestation on a nursing home resident’s body is a very disturbing violation of minimum care standards. Sadly, this nursing home has a long history of these types of violations, which raises serious questions about what is being done to truly hold it accountable for substandard care and resident harm. In the absence of meaningful fines or penalties, there is little to stop a facility from relapsing, putting current and future residents at risk," Mollot said.

Health Department spokesman Jeffrey Hammond said the state has fined Premier Genesee $12,000 since 2017 for other violations, but it imposed no fine for the maggots.

“While no fines were issued for the deficiencies cited in this instance, the facility was required to implement a plan of correction to ensure that this type of incident does not occur in the future," he said.

Premier Genesee has taken a number of steps to improve conditions at the facility since it was cited. They include making sure screens remain properly fitted in windows and eliminating gaps in doors to block flies from entering, making sure bug light traps are plugged in and that monthly recommendations for repairs from a pest control company are promptly addressed. 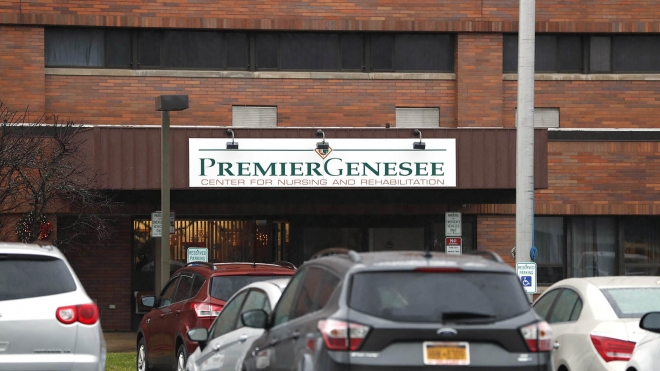 In addition, a new guideline and training on how the nursing staff can reach nursing supervisors has been put in place. Nurses and nurse supervisors have also been re-educated on the policy for notifications to physicians and relatives when there is a change in a resident’s condition.

The federal government rates the nursing home at an overall two stars, below average.

Sharp’s family moved her to another Batavia nursing home on Oct. 3 and on Dec. 19 filed a lawsuit in State Supreme Court against Premier Genesee.

“You don’t really think it could be true or it could ever happen," Schmidt said of the maggots. "How would anyone feel having that happen to a loved one?”

Lisa Sofia, the chief executive officer of Premier Genesee, declined to comment on what happened to Sharp because of the pending lawsuit.

Sharp, now 90, lacks mobility and has mild dementia, which was why her family placed her in the nursing home in June 2014 when the facility was known as the Genesee County Nursing Home.

A retired homemaker and grandmother, Sharp had lived in Erie County's Southtowns most of her life and served as a volunteer bringing library books to an East Aurora nursing home. About 20 years ago, she moved to Attica to be closer to her only child, Tarynn Willson, who is Schmidt’s mother.

Four days before Schmidt’s visit to see her grandmother, on Sept. 21, maggots were discovered in wounds on Sharp’s lower left leg, according to the Health Department investigation.

The wounds were caused by ruptured blisters from cellulitis bacterial infections. A licensed practical nurse hired through a staffing agency was changing old dressings on the wounds when the nurse “observed five – six maggots” on the wounds, flushed them down the toilet, completed treatment of the wounds and unsuccessfully attempted to alert the facility’s nursing supervisor of the situation, according to the Health Department investigation.

An additional two days passed before a wound specialist provided hands-on treatment. Even then, there was a mistake, the state determined.

The doctor told investigators that after removing dead tissue from Sharp's wounds, he did not have time to apply a new dressing and expected a nurse would complete the task. Instead, the wound was left uncovered for “five to nine hours,” allowing “enough time for a fly to have laid eggs on the resident’s leg causing the maggots,” the investigation stated.

Schmidt says the doctor should have taken the initiative and applied a fresh dressing.

“If a doctor comes in and debrides the wound, why can’t he spend a few moments and dress it for infection control?” said Schmidt, who is a nurse practitioner herself.

The facility’s director of nursing, in a statement to the Health Department investigator, said the time period of exposure was “unacceptable and provided ample time for a fly to lay eggs causing the maggots on Resident 1’s leg.”

Schmidt said that her training as a nurse practitioner and the behavior of the staff during her Sept. 25 visit raised her suspicions that there was more to the story.

“The director of nursing came to my grandmother’s room about 20 minutes later and acts like this is brand-new to her. They are trying to figure out what to do. They are saying, ‘We’re going to get housekeeping up here. We’re going to get the wound doctor. We’re going to put grandma in the shower and disinfect the room.' At the same time, there’s a roommate present with a family member. It was chaotic," Schmidt said.

“But I knew the maggots couldn’t have just happened that day,” she said.

On Sept. 26, Schmidt tried calling the director of nursing but was informed the director was out of the office. “I then asked to speak with the nursing home administrator. We spoke briefly on the phone and I felt she was disregarding the situation,” Schmidt said.

Schmidt said she returned to the nursing home after work later that day and received her grandmother’s written permission to review her medical chart.

“That’s when I found out that this started on Sept. 21,” Schmidt said of the maggots, adding that she went to nursing home administrator Carole Francis’ office. “I had to wait 30 minutes, and in that time my mother arrived.”

Schmidt said the administrator refused to answer any questions during a five-minute meeting.

Sofia, the nursing home CEO, said that no staff members, including Francis, are allowed to speak to The News.

In the state investigation report, the director of nursing told an investigator that the licensed practical nurse who initially discovered the maggots has been banned from working at the facility “for lack of nursing supervision notification.”

The licensed practical nurse, however, told the investigator she not only recorded the incident in Sharp’s file, but also informed a registered nurse and tried “many times” to alert the nursing supervisor by phone, pages and texts, but could not reach her. The nursing supervisor told the investigator that her phone was not working that day, but that she had told personnel at different nursing stations she could be reached by page or text.

Schmidt and attorney Dean P. Smith, who represents Sharp in the lawsuit, say they believe the facility’s decision not to rehire the licensed practical nurse amounts to making her a scapegoat.

“The whole event when you look at the details of the state’s investigation is as nauseating as it is shocking to the conscience,” Smith said. “The excuses are absurd."

[Read the lawsuit against Premier Genesee]