Even though the Bills lacked a dominant outside receiving option opposite John Brown, their third receiver still was a better option than their second tight end.

The additions of Brown and slot receiver Cole Beasley made the 11-personnel grouping far better than in the 2018 season. The Bills passed for only 2,416 yards in 11 personnel in 2018, 308 fewer than this season.

Devin Singletary averaged 5.07 yards a carry running out of 11 personnel.

The Bills ran their two-tight end set (12 personnel) on just 10.1% of plays. The NFL average was 20.4%. That’s an area in which the offense could improve in 2020. Teams with two excellent tight ends make it tough on defenses to lean against the run or pass.

The Bills ran well out of 12 personnel. But the passing game wasn’t good enough in the two-TE offense, with the completion rate just 54.7 and the average gain just 6.39 yards per attempt.

The rushing totals were poor in 22 personnel – two backs and two tight ends – but that was because the Bills used that grouping in a lot of short-yardage and goal-line situations. The averages were sure to be lower. 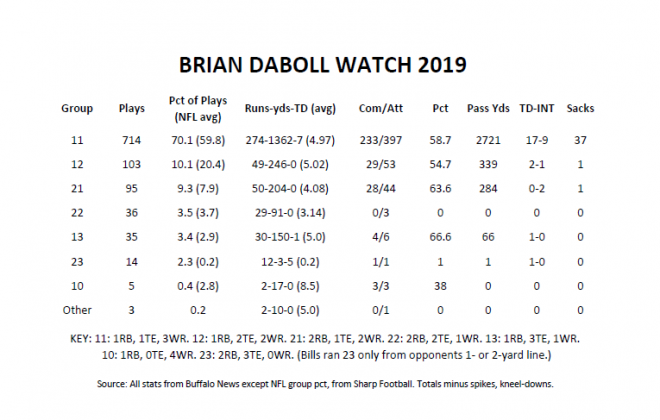