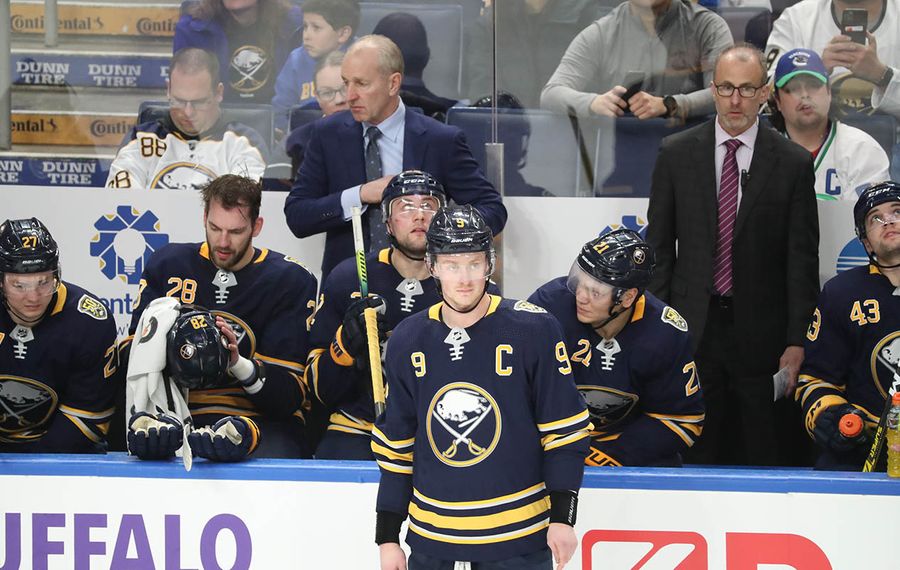 DETROIT — There was no rest for Sabres coach Ralph Krueger following a 6-3 loss to the Vancouver Canucks on Saturday. He and his coaching staff planned to dissect how Buffalo unraveled in the final 14 minutes, and the players would be briefed ahead of puck drop against the Red Wings.

We may see a philosophical shift from Krueger. For roughly two weeks, the Sabres switched back and forth between using six or seven defensemen in their lineup. Krueger told reporters following practice Friday in KeyBank Center that he wasn't concerned about a lack of continuity among his defense pairings.

"We need to try and find some consistency," Krueger said. "That can be a reason for some of the breakdowns today. It’s definitely one of them I will be looking at with the coaching staff, but we have had injuries coming in and out of games. We’ve had bodies in and out of games, so we’ve had to learn how to deal with that and good teams do. ... It didn’t feel cohesive at all today — I have to be the first to say — and we need to find that quite quickly."

Flat tire: The Red Wings have the fewest points in the National Hockey League, trailing the Ottawa Senators and Anaheim Ducks by 12. Additionally, Detroit has a negative-71 goal differential and three of its wins came against the Montreal Canadiens.

This is a game the Sabres need to win. Buffalo has won four of the past five games between the two teams, including a 2-0 win Oct. 25.

Lineup: Krueger told the media Sunday afternoon that he was "leaning toward" using 11 forwards and seven defensemen against the Red Wings.

Winger Jimmy Vesey will be a healthy scratch for the first time this season, while defenseman Zach Bogosian will draw back into the lineup.

Goalies: Linus Ullmark will start in goal for the Sabres after sitting Saturday against Vancouver. Ullmark had started Buffalo's eight previous games and 13 of its past 14. He has an .890 save percentage in seven starts since the holiday break ended Dec. 27.

The Sabres allowed fewer than 30 shots on goal in six of Ullmark's last eight starts. Detroit will start either Jimmy Howard or Jonathan Bernier.

Improvement: Special teams were the Sabres' only bright spot Saturday against Vancouver. Though the power play went 1 for 3, the Sabres' top unit gave them momentum at 5 on 5. The Sabres possessed the puck for almost three minutes when Brandon Montour scored on a shot from the left circle at 8:44 into the first period.

Sam Reinhart also scored on the power play with a one-timer from the left circle, and the penalty kill went 2 for 2.

Standings watch: The Sabres are seven points behind the Philadelphia Flyers for the second wild-card playoff spot and fell behind the New York Rangers. The Sabres' goal differential is down to negative-15 after they were outscored 11-4 in their last two games.

Buffalo is also nine points behind the Toronto Maple Leafs for third place in the Atlantic Division. Time is running out.

"This is the time of year where you can learn and get those experiences, I guess, but in the end here, we have a tough division," Montour said Saturday. "We’re points behind now. You’ve gotta collect points. It’s one of those things where you obviously need to get as many wins as you can before bye week and if you’re close in the mix there you have to sprint to the end, so every point matters."

Streaking: Sabres captain Jack Eichel has seven points during his current six-game point streak. His 27 goals are tied for third-most in the NHL, and he has 58 points through 44 games. Rasmus Dahlin also has points in three straight games.