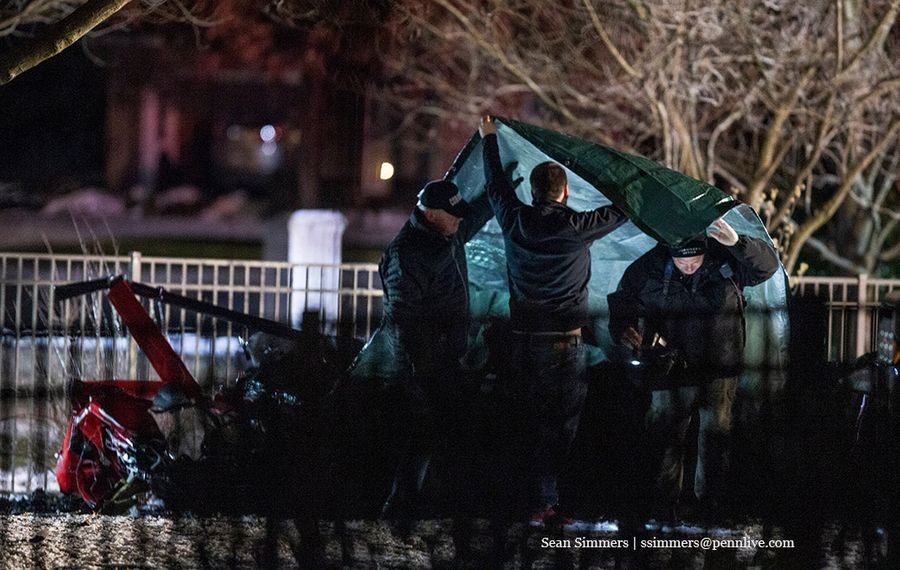 Federal investigators will issue preliminary findings in the next week to 10 days surrounding the Thursday helicopter crash that killed two Orchard Park businessmen in central Pennsylvania.

Terry Williams, a National Transportation Safety Board spokesman, said Sunday that investigators will not issue a final report for another 12 to 18 months regarding the crash that killed Buffalo developer Mark Croce and his passenger, Michael Capriotto. But NTSB personnel are continuing their “on scene” phase, he said, which will lead to the initial report.

“We’re in the fact-gathering phase of the investigation,” he said.

Pennlive.com, a Pennsylvania news website, reported Sunday that crews removed the chopper wreckage early Saturday evening, transporting it via flatbed truck to an unknown location in Delaware. The website also reported that the smell of fuel still permeated the site – a backyard at the intersection of Surrey Lane and Irongate Court – and that environmental crews may be summoned for possible remediation.

Croce, the high-profile developer and restaurateur, was piloting his Robinson R66 Turbine chopper with Capriotto aboard from Baltimore to Buffalo on Thursday when police in Silver Spring Township received calls of a crash at around 8:30 p.m. When emergency crews arrived, both men were pronounced dead at the scene.

Now, Williams said, his agency will analyze myriad pieces of evidence in the days and weeks ahead to determine the accident’s cause. They include flight documents Croce may have filed with the FAA, examination of the crash scene, interviews with witnesses and scrutiny of maintenance records.

“We’ll look at the pilot, his training and his license,” he said, “and we’ll look at the aircraft, its maintenance and any modifications to it. It’s standard operating procedure.”

He also said the amount of fuel aboard the helicopter will be measured to determine if it had any bearing on causing the crash.

Complete coverage of the crash

No distress call from helicopter, official says as probe of crash begins: The wreckage of the helicopter was moved to a secure location and witnesses were interviewed as the National Transportation Safety Board began its investigation into the cause of the crash, a process that can take a year or longer. An NTSB spokesman did say Saturday there was no distress call from the helicopter and that some preliminary results could be released later this week.

Mark Croce, Michael Capriotto killed in helicopter crash in Pennsylvania: Investigators from the Federal Aviation Administration and the National Transportation Safety Board, along with the Pennsylvania county's crash team, headed to the scene Thursday night.

Back from the brink, Mark Croce's Statler goes on as living statement: "The old Statler Hotel on Delaware Avenue will always be associated with Mark Croce, who renamed it 'Statler City,' built a thriving wedding and event operation on the lower floors and all but dragged the 19-story landmark away from the brink," writes Sean Kirst.

Mark Croce saw potential downtown when few others did: "Croce, who died in a helicopter crash Thursday night in Pennsylvania, was a pioneering developer who not only dared to invest in downtown Buffalo at a time when it was reeling, but who also dared to do it by renovating some of its old, vacant buildings," write David Robinson and Jonathan Epstein.

Obituary: Mark Croce, 58, developer, restaurateur, pilot and larger-than-life personality: Among the stories shared by those who knew him best, was his fondness for arriving at work by helicopter, landing on a helipad downtown. “When he’d land, motorists would stop and look and the police would show up and say, ‘You can’t do that.’ He’d say, ‘I can. I cleared it with the tower,’ ” said Dan Welch, who worked as the Chophouse maitre d' for years.

In business, government and civic affairs, Michael Capriotto stood tall: Capriotto was a former Orchard Park village trustee and was president of the Woodlawn Cemetery Association. He also owned Bauer Service, an auto service shop located across from Town Hall that was previously owned by his father and uncle.

Obituary: Michael D. Capriotto, 63, 'always looking to help' : "My husband was always a forward thinker," said Joanne Capriotto, noting that he started his own water jet business designing and cutting tiles for businesses including Mark Croce's Curtiss Hotel, where Capriotto also figured out how to create the rotating bar Croce wanted.

"It was so loud, I couldn't tell where it had hit": Mike and Melissa Brion were putting their two daughters to bed Thursday night when they heard the noise of a passing helicopter in the sky. At first, it sounded normal. Then, according to Mike Brion, the noise got louder.

Western New York leaders mourn Croce as "part of our resurgence": Croce put his stamp on Buffalo with his involvement in several prominent projects.

Mark Croce's businesses and properties in the City of Buffalo: Mark Croce was a prominent property owner and developer in downtown Buffalo, especially along Franklin Street. Here's a look at what he owned.

Croce was flying new Robinson helicopter; safety questions have been raised: The Robinson R66 can carry up to five passengers and travel up to 350 miles without refueling, according to information on the manufacturer's website. There are some questions about the safety of some of Robinson's products.