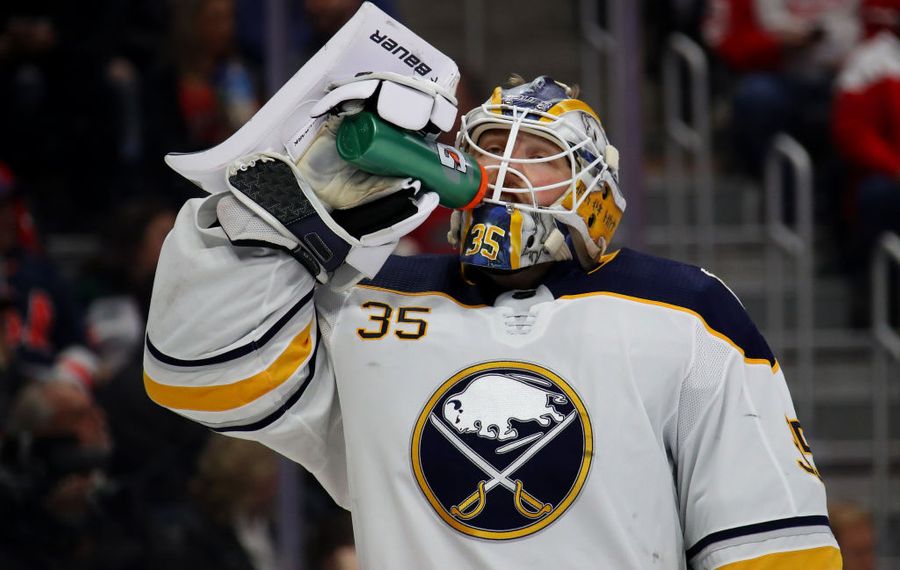 DETROIT – Ralph Krueger didn't want to pass up a teaching moment for the Buffalo Sabres on Sunday. Rather than having a morning off ahead of the second game of a back-to-back, players gathered for a meeting to dissect what went wrong in a third-period collapse Saturday against the Vancouver Canucks.

The Sabres responded with an encouraging performance, as four different players scored in a 5-1 win over the Detroit Red Wings in Little Caesars Arena. Buffalo (20-19-7) snapped its two-game losing streak and improved to 7-13-4 away from KeyBank Center.

Evan Rodrigues scored two goals – his first of the season – in the game's first five minutes, and Zemgus Girgensons added another on a breakaway to give the Sabres a 3-0 lead through 20 minutes. Zach Bogosian and Rasmus Ristolainen also scored for Buffalo, and Linus Ullmark made 21 saves.

Madison Bowey had the only goal for Detroit (12-31-3), which has the fewest points in the NHL.

Bulldozer: Curtis Lazar ran over Red Wings defenseman Filip Hronek at Detroit's blue line and retrieved the puck before passing to Rodrigues, whose one-timer from the slot gave the Sabres a 1-0 lead at 2:39 into the game.

Make it two: Rodrigues corralled a pass at the bottom of the left circle, shot quickly on Howard and capitalized on the rebound for a 2-0 Sabres lead five minutes into the first period. It was Rodrigues' first multigoal game since Dec. 10, 2017, and Buffalo's power play has scored in two of the past three games.

Standing tall: Ullmark stopped all six shots he faced in the first period, including chances from the slot by Dylan Larkin and Frans Nielsen. Entering Sunday, the Sabres were 7-2-1 when leading after the first period.

Breakout: Red Wings forward Filip Zadina's errant pass on a Detroit power play sprung Girgensons for a breakaway and the Sabres winger capitalized with a shorthanded goal for a 3-0 Buffalo lead with 7:17 remaining in the second period.

Near disaster: The Sabres managed only three shots on goal in the second period and did not have much time in the offensive zone. More mistakes in the defensive zone resulted in quality scoring chances for the Red Wings, who had 11 shots in the second.

Close call: Moments after a failed Sabres power play, Detroit center Valtteri Filppula retrieved a loose puck in the neutral zone and skated alone for a breakaway, but his backhanded shot was stopped by Ullmark less than two minutes into the second period.

Ullmark also got away with mistakenly leaving the crease and getting caught behind the goal line beside the net. However, Detroit defenseman Alex Biega's shot deflected off a Red Wings player.

Screened: The Red Wings scored with 8:04 remaining in the second period, when Bowey's wrist shot from the right point went over Ullmark's blocker to cut Buffalo's lead to 3-1. Detroit winger Tyler Bertuzzi screened Ullmark on the play.

No hands: Detroit almost cut the deficit to one goal less than three minutes later when a deflected shot leaked through Ullmark and into the crease, where Brandon Montour used his glove to prevent the puck from going over the goal line. The play was initially ruled a goal, however, the call was quickly changed and Zach Bogosian was penalized for delay of game.

The sequence began when Bogosian pinched in the neutral zone to give the Red Wings a 2 on 1, though Montour managed to break up the centering pass. Entering Sunday, the Sabres were 15-1 when leading after two periods.

A night of firsts: Bogosian also scored his first goal of the season at 2:35 into the first period by skating into the right circle and cutting to the slot, where his backhander went through traffic and into the net for a 4-1 lead.

Michael Frolik was credited with the secondary assist, his first point since joining the Sabres.

Pouring on: Ristolainen pushed the lead to 5-1 with a power-play goal at 3:40 into the third period. He won a battle for a loose puck off the faceoff and jammed a rebound into the net. Jack Eichel and Rasmus Dahlin stretched their point streaks to seven and four games, respectively.

The Sabres improved to 4-4-1 in the second game of back-to-backs.

Scratches: Jimmy Vesey went from the top line to healthy scratch. The 26-year-old joined Colin Miller and Rasmus Asplund in the press box Sunday after skating on a line with Eichel and Sam Reinhart against Vancouver on Saturday.

Vesey had two shots on goal with a minus-1 rating in 16:47 against the Canucks. He has five goals among 13 points with a plus-9 rating in 42 games. Asplund had one shot on goal in 6:43 of ice time Saturday against Vancouver, and Miller has been scratched 14 times this season.

Next: The Sabres are scheduled to be off Monday and host the Vegas Golden Knights on Tuesday in KeyBank Center.