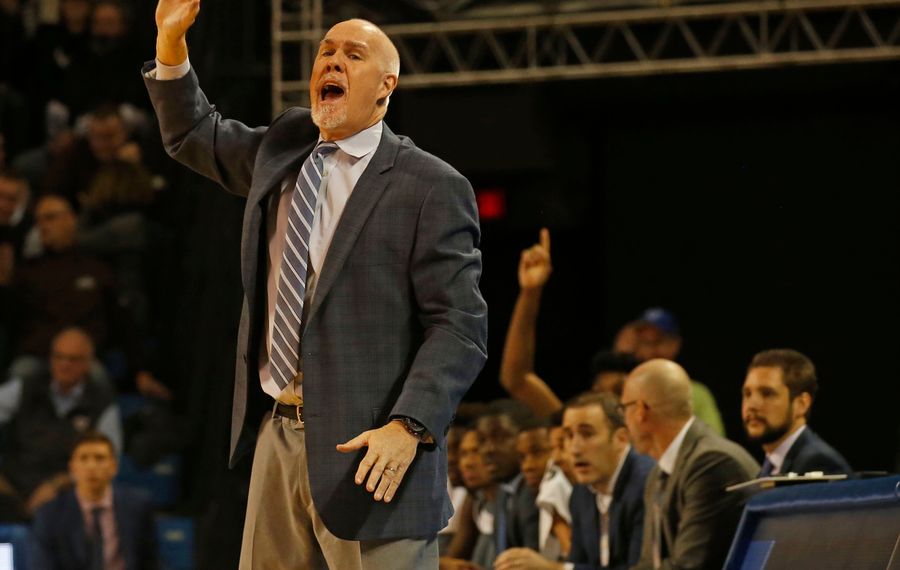 ALLEGANY – When Kyle Lofton went to the bench with his fourth foul, the St. Bonaventure men’s basketball team needed to exercise its depth.

Jaren English and Matt Johnson stepped onto the court with less than 11 minutes left in Bona’s 64-44 win against Fordham on Saturday at the Reilly Center.

English and Johnson gave the Bonnies a necessary lift in their first game at the Reilly Center since Dec. 18.

English scored nine of his 16 points in the second half and added six assists for the Bonnies (11-5, 3-0 Atlantic 10 Conference). English missed Bona’s first two conference games due to concussion protocol, after he was injury in practice at the start of the new year.

English said he was cleared to play Friday. A day later, English took over at guard with Lofton in foul trouble and helped the Bonnies open a five-point lead to 13 with six minutes left.

“Jaren was able to score, he was able to handle the ball, he can play multiple positions, so we played him some at the 2,” Bona coach Mark Schmidt said. “He can take the ball to the basket. He’s a winner, and we missed him the last two games. He brings a different dimension. He brings some toughness and some physicality from the guard position. He did a really good job. We couldn’t have done it without him.”

Following a two-game stretch in which he scored 14 points off the bench, Johnson opened Bona’s lead to 10 points on a free throw with 7:03 left in the half, part of a 19-4 run in the final nine minutes.

Lofton scored a game-high 17 points, had seven assists and scored in double figures for the seventh straight game. But as Bona proceeds through its Atlantic 10 schedule, depth will become essential, even with an outside presence like Lofton, and with multiple options in the paint, starting with center Osun Osunniyi, who had 14 rebounds and blocked three shots against Fordham (6-9, 0-3).

“You can’t always rely on Kyle,” Schmidt said. “There’s going to be times when your quarterback gets knocked out and somebody else has to step up. It was good to see we were able to go on a run with Kyle on the bench. That will give those guys a little bit of confidence, but we don’t like to have Kyle sitting on the bench.

“But when that happens, someone else has to step up, and that’s the sign of a good team.”

Lofton explained why depth at guard, particularly the play of Johnson and English, will be valuable.

“It shows the toughness and how committed they are,” Lofton said. “Anybody could have folded. They could have just gave up. But they showed that not only I can do it, but they can bring whatever I can to the table, as well.”

Fordham shot 6 for 20 on 3-pointers in the first half but scored only two points in the paint, and the Bonnies took a 38-24 halftime lead and led 42-28 less than five minutes into the second half.

But in a stretch of 6:37, the Bonnies went 1-for-4 from the floor, missed a pair of free throws and committed four turnovers, while a 12-3 run that included a pair of 3-pointers by Ivan Raut (12 points) brought the Rams within 5 -- the closest margin between the Rams and the Bonnies in the second half.

English’s free throws with 8:53 left, however, started the 19-4 run that helped the Bonnies close their third Atlantic 10 win. And while Lofton sat out for more than six minutes, he made a point to offer another set of eyes to English and Johnson.

“He’s talking to me and Matt, looking us in our eyes and he’s saying, ‘let’s go, we’ve got to pick it up,’ ” English said. “Me and Matt, we tried to pick it up, keep the same intensity, running the plays, and he’s helping us, throughout. He’s calling out certain things he’s seeing. A dead ball, he’s looking over to me and yelling, ‘see the weak side! The help’s there!’

“It’s good to have a guy like Kyle, a true point guard, there, critiquing you and telling you, seeing what he sees.”