On Friday afternoons in the heart of Buffalo’s immigrant community, at a time when most kids high-five and welcome the weekend, Lancaster Central High School teacher Lynne T. Ruda and a small band of her students help children from around the world better appreciate a universal language.

Ruda is one of many music teachers who volunteer with Buffalo String Works, a makeshift 14-room music school in the Buffalo Dream Center on Lafayette Avenue, but one shining example of what helped lift her into rarefied company as one of 10 finalists for the Music Educator Grammy, to be awarded on Jan. 26.

“Sometimes I feel my Lancaster students are in a bubble," Ruda said. "We don’t have the most diverse demographic in our area so just exposure to students of different cultures and who have different traditions is eye-opening."

Dream Center students are younger than her students, the music educator explained, and not necessarily experienced with orchestra. Her students play alongside them and teach what they've learned.

"That empowers my students to learn more and gives them good communication skills,” Ruda said.

A former student nominated her for the Grammy, which recognizes current educators who have made a lasting contribution to music and who demonstrate a commitment to maintaining music in schools. About 3,300 teachers across the country were nominated.

Ruda's facial expressions mirror her words and musical instruction. Teaching and community involvement fill her weeks. A calendar board at home even allots time for dinner daily with her husband, Aaron.

"I get inspired by her," said Brandon Nightingale, a Lancaster High School senior who helps at the Dream Center. "She goes through so much stress, and I’m amazed because she just shrugs it off and puts a smile on her face. She wakes up at 5 every morning to do yoga. I used to be stressed, but she taught me to relax."

Sarah Lewandowski, a freshman, jumped at the chance to visit the Dream Center – because of her teacher.

"She really cares about every one of us, spending time with us," Lewandowski said as she held her violin. "I played my solo for her because I’m trying out for Erie County Orchestra. Mrs. Ruda told me how to make my notes clear. Ever since I walked into the music room of the high school, I’ve improved so much."

Ruda, petite and 33, is a Lancaster native who graduated in 2004 from the school where she now teaches. She serves as a senior class adviser and conductor of the school symphony and string orchestra. She also is a member of Buffalo Musicians Local 92, and performed onstage in a May concert at KeyBank Center with The Who, one of her parents’ favorite bands.

She is a Lancaster Village Board trustee and chairs the board’s economic development committee. She and her husband also serve their community as volunteer firefighters. 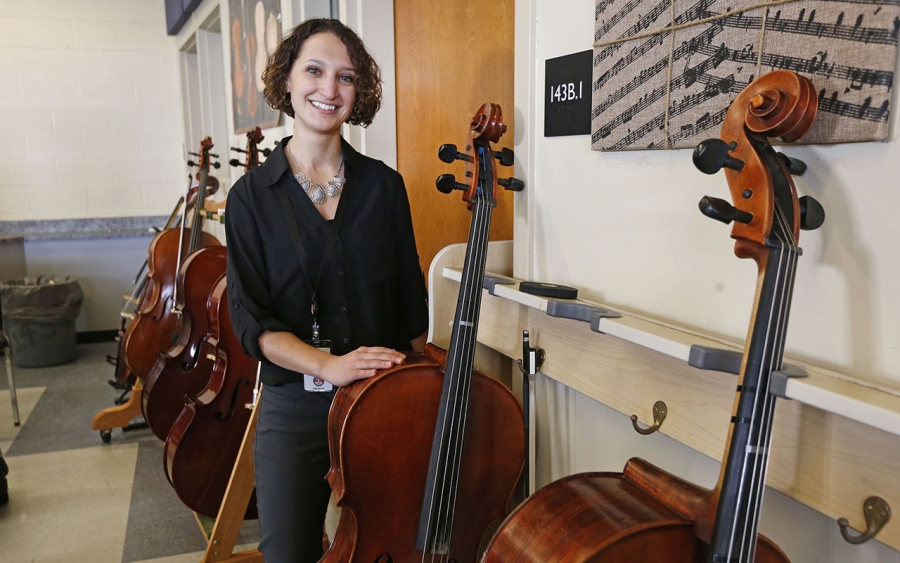 Lynne Ruda is a Lancaster native who now teaches at the high school she graduated from in 2004. (Robert Kirkham/Buffalo News)

As a child, Ruda was always on the go, said her father, Gary Bona, 67.

“Her mother would tell her to sit down and relax," Bona said. "She sat for a half-hour and then told us she couldn’t do it any longer.”

The second-youngest of four children, Ruda may have been a dynamo to her family, "but I was a very quiet kid growing up,” she said. “I was very shy; I didn’t like to be called on, didn’t like to speak if I could avoid it."

She played the cello and preferred to let her instrument do the talking.

Ruda began to study forensic science at the University of Central Florida in 2004, and quickly learned it wasn’t a good fit.

“They told us to lose our compassion," she said. "We had to, because we’d be dealing with the worst of the worst crimes. We needed to turn off. That was terrible.”

She returned to Western New York, transferred to SUNY Fredonia State, and earned her bachelor’s and master’s degrees in music education, as well as a performance certificate.

Ruda experienced a big wake-up call when her cello studio professor encouraged her to find her own voice.

“If I was going to be a teacher, in front of people, I needed to find a way to deal with that,” she said.

Jonathan Borden, a double bassist for the Buffalo Philharmonic Orchestra, met Ruda through Symphony Scholars, a high school enrichment program sponsored by symphony orchestras throughout the country. It offers students season passes to performances and opportunities to meet the musicians.

“Lynne is the driving force for bringing kids to these events, organizing buses from Lancaster for all of these kids. If you are an orchestra student at her school, she wants you to take it seriously,” said Borden, 27, who studied at the Juilliard School.

“The first time I was surprised by her is when she asked for private bass lessons herself from me,” Borden said. “All music educators when they’re in school learn how to play every single instrument. But learning how to play 12 different instruments, it’s hard to get good at one of them. She said she felt weaker with double bass because it is kind of a weird instrument in the string family.

“I never met somebody – and this is no hyperbole – as driven in the field of music education as Lynne. She just holds herself to incredibly high standards all the time. For me, it’s a good example to follow for how to work with kids and aim high.”

Ruda, in turn, sees symphony musicians as the perfect role models for her students.

“Every student needs a role model, and they are hard to come by," she said. "They look to politics; they look to sports, but I want my students to look to music,” said Ruda. “We are lucky to have so many in our backyard with the Buffalo Philharmonic.”

Ruda’s continuing program of self-study inspires her musicianship, she said.

"I’ve played for 23 years now,” she said. “I try and practice every day. I take lessons whenever I can. It’s really good for my students to see me practice. We get a couple of minutes between classes, so I’ll just pick up my cello and get a few scales in."

Ruda plays out as much as possible, too. She jumped at the chance last May, when Buffalo Musicians called her with an ensemble opening for a string musician to accompany The Who.

“I heard them growing up and all of a sudden I am on stage with them,” she said. “My parents go to every concert I perform in or conduct, whether it’s the Greater Buffalo Youth Concert or at Roswell Park, and here they already had tickets. It was pretty amazing.”

Of all the concerts her parents attended, there was one her father couldn't see: the first of the annual holiday concerts she performed for Roswell Park Comprehensive Center.

"I was a patient at Roswell," Bona said. "One of the songs she played was my favorite Christmas song, 'O Holy Night.' She introduced it by saying, 'My dad can't be here tonight, and this is his favorite Christmas carol. Dad, this is for you,' she said. "My wife videoed the concert for me. Lynne was in tears and so were the students around her."

When Bona saw the video, he cried too.