The irresistible performance of Michele Marie Roberts is the primary reason to see the Kavinoky Theatre production of the “The Bridges of Madison County.”

Down to the last ensemble member, this luxuriously romantic musical is populated with some of Buffalo’s best musical theater talent, but foremost among these is golden-throated Miss Roberts, who plays Francesca Johnson, an Italian war bride living in Winterset, Iowa, in 1965. She sings with the gorgeous glory of an angel and manages to convince us that the meaning of life can be found in a three-day affair with a charismatic stranger who is just passing through town.

In this story, Francesca is living quietly in rural Iowa with her farmer husband, “Bud,” played by Christopher Guilmet, and their teenage children: Michael, played by Ian Hayes, and Carolyn, played by Arin Dandes. When the family goes off to a State Fair with their prize steer, they leave mother home alone. Within minutes, a dreamy stranger is driving up the driveway. It’s Robert Kinkaid, photographer for National Geographic magazine, on assignment to photograph the famed covered bridges of Madison County, Iowa. He needs directions.

As it turns out, Francesca has been looking for direction, too. The two quickly find uncanny compatibility and embark on a passionate affair.

This 2013 show with music and lyrics by Jason Robert Brown and book by Marsha Norman is based on the trashy 1992 novel that was one of the bestsellers of all time. A 1995 film starred Meryl Streep and Clint Eastwood. While hugely popular, the novel was despised by critics for its cheesy recycled clichés, plucked with panting predictability from the pages of Harlequin romances. 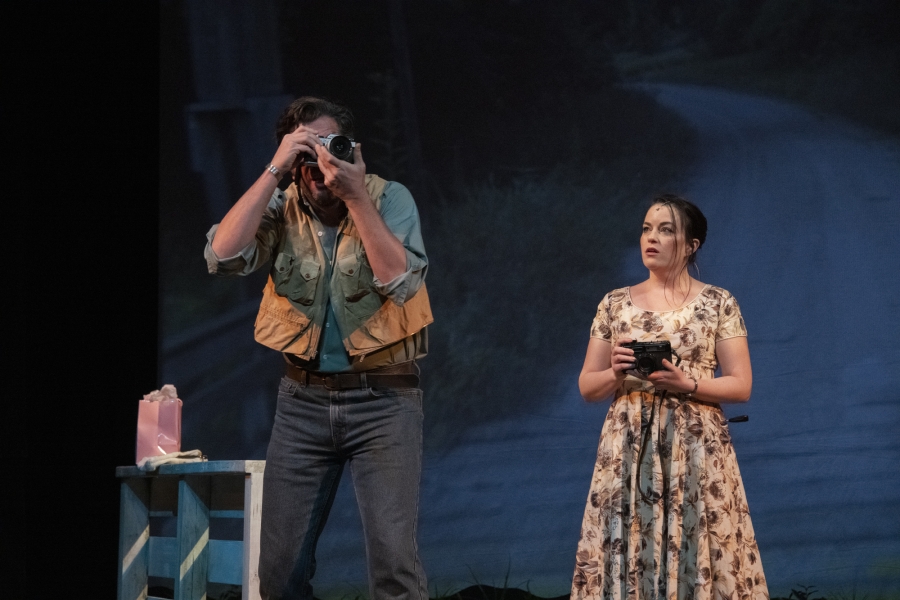 Steve Copps and Michele Benzin star in "The Bridges of Madison County" at the Kavinoky Theatre. (Photo by Gene Witkowski)

The musical somehow convinces us to forgive all that. We are, in effect, seduced by a superior score and the deft touch of Norman, a Pulitzer Prize winner for “ ’night Mother,” who imbues her script with both social context and humor.

This alchemy reminds me of what happened when Orson Welles took a grade B Booth Tarkington novel and turned it into a cinematic masterpiece, “The Magnificent Ambersons.” Sometimes tales of trash contain the truths and fantasies that obsess us.

The production is handsomely directed by Loraine O’Donnell with musical direction by Allan Paglia and choreography by Kelly Copps, who also gets to belt a big number as Kinkaid’s ex-wife.

Steve Copps plays Kinkaid, opposite Roberts, and with every look in her direction, every gentle brushing of her cheek, touch of her disheveled hair, and good heavens with every kiss, he showcases her as perfectly as Nureyev did Fonteyn. He strikes a steady and magnetic figure, and the score slides into the resonance of his baritone voice perfectly.

The novel asserted that “The Bridges of Madison County” was a true story, which it, of course, was not. To this day, National Geographic receives requests for information about the magazine’s most famous photographer, Robert Kinkaid, a man who never existed. The invitation to believe in the reality of the secret love between Francesca and Robert, however, invites all readers and all viewers to invest their own real emotions in the story.

The Kavinoky has mirrored the “true story” device, by taking the cast to Winterset, Iowa, to shoot video. At first, I found the video by Brian Milbrand intrusive, but eventually, I was drawn into its spell, as we drive down the roads of Winterset. The most powerful video moment, however, is when we are transported to the devastation of Naples, Italy, after World War II by Francesca’s memories.

This production differs from what I recall seeing on Broadway in subtle ways. I recall an ending in which Kinkaid’s camera is delivered to Francesca in the final scene and she accepts it with a sphinxlike smile. I recall a confrontation in which Bud demands to know why Marge the neighbor has prepared a lasagna dinner when Francesca is the Italian.

No matter. This tale about the interweaving of life’s narratives sustains these variations. The novel, after all, had another ending entirely.

Pamela Rose Mangus and Paul Maisano are delightful in the hokey roles of Francesca’s neighbors, Marge and Charlie. They are silly echoes of Gladys and Abner Kravitz from the 1960s “Bewitched” television show, but deliver a big payoff when Marge uses her nosiness to rescue rather than destroy her good friend.

Playwright Norman’s handling of Michael and Carolyn is especially interesting, and Hayes and Dandes fill these characters with both charm and gravity. This may, of course, be Dandes’ final chance to work her magic of playing a child, so you won’t want to miss it. Guilmet brings complexity to Bud, a character written in rather broad strokes.

There is no escaping this show’s trashy origins, but at the same time, it is impossible not to acknowledge the enormous appeal of its tale of romantic yearning, and ultimately, of fidelity. Yes, fidelity. For a while this is, on its surface, a story of infidelity; in the final analysis, spouses, parents, children, neighbors and even adulterous lovers remain faithful to each other.

“The Bridges of Madison County”