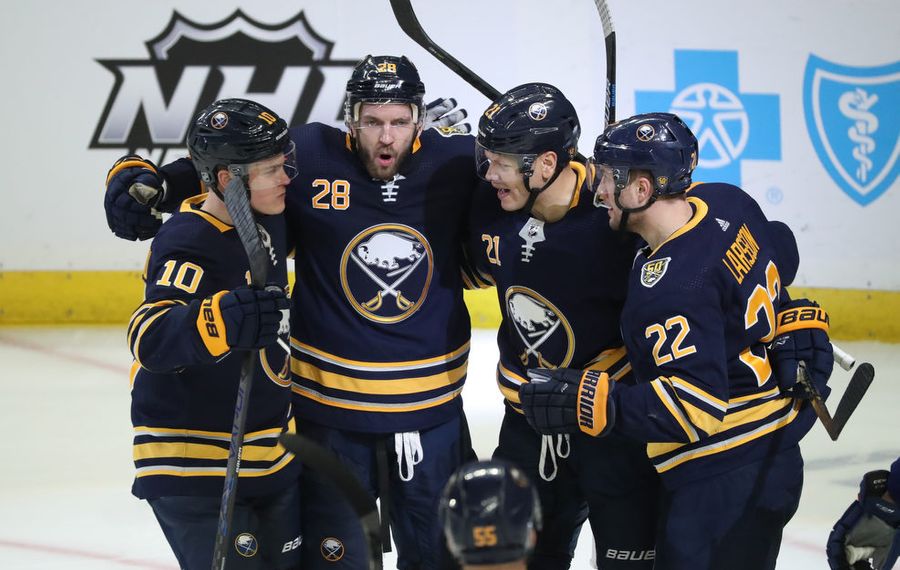 The power play finally created some momentum for the Buffalo Sabres.

After maintaining possession in the offensive zone for almost three minutes, the Sabres broke through when Brandon Montour scored off a cross-ice from Rasmus Dahlin at 8:44 into the first period Saturday in KeyBank Center.

The goal occurred 39 seconds after the power play and became an afterthought in a 6-3 loss to the Vancouver Canucks. However, special teams were one of the few bright spots during a game in which the Sabres allowed three unanswered third-period goals.

Sam Reinhart broke Buffalo's 1-for-21 power-play slump with his one-timer in the second period, and the Sabres went 2-for-2 on the penalty kill.

"I thought the power play was moving the puck well," coach Ralph Krueger said afterward. "I thought the presence of (Rasmus) Ristolainen net-front changes the game and opens up the opportunities to shoot and also seems to increase the hunger for shooting. Let’s continue to build on that for sure and again, the penalty kill did well tonight and can take some confidence moving forward."

The Sabres' power play entered Saturday ranked 22nd in the National Hockey League, and it was without Victor Olofsson, who has a team-high nine goals on the man advantage this season. Additionally, the Canucks' penalty kill on the road ranked eighth in the league.

A strategical adjustment made a difference. With Olofsson out, Krueger has shifted Reinhart into the left circle, while Marcus Johansson is in the right circle and Jack Eichel hovers in the high slot.

Meanwhile, Ristolainen is in front of the net to screen the goalie, and Rasmus Dahlin quarterbacks the top unit from the blue line. With and without Olofsson, the Sabres have been plagued by over-passing and missed shots.

Krueger saw Dahlin as the potential solution. The 19-year-old defenseman delivered with his play-making ability against Vancouver, though. Dahlin helped the Sabres maintain possession on their first failed opportunity.

Dahlin sent a cross-ice pass to Montour, whose shot from the left circle went over Jacob Markstrom's glove only 39 seconds after the power play ended.

"It was just the momentum," Montour, who had not scored in 23 games, said. "Some good chances there, and I hopped out there and got a nice feed from Dahls. Good to find the net there."

Reinhart needed only 18 seconds following Jay Beagle's holding penalty to score a second power-play goal in three games. Jack Eichel skated into the right circle and passed back to Dahlin, who sent the puck over to Reinhart.

The ensuring shot went over Markstrom's shoulder to tie the score, 2-2, with 13:35 left in the second period. Rather than using two units during Buffalo's three opportunities, Krueger gave most of the power-play time to his first group. The only exception was Jimmy Vesey, who received 29 seconds on the man advantage.

"I think guys getting to open areas and wanting the puck, creating some offense off some movement," Reinhart said of why the power play was effective.

Forward Evan Rodrigues played his first game since reportedly expressing a desire to be traded by the Sabres. Rodrigues, who was scratched in four consecutive games, had one shot on goal in 10 minutes while playing mostly with Rasmus Asplund and Curtis Lazar.

Rodrigues' best opportunity came in the third period when his shot from the slot missed the net. He has zero goals with three assists in 25 games this season. Asplund, meanwhile, played fewer than 10 minutes for the first time in four games.

Defenseman Colin Miller was a healthy scratch Saturday after playing three consecutive games. Miller, who was acquired from Vegas for two draft picks in June, has been scratched 13 times in 28 games since Nov. 14. He has one goal among six points and a minus-5 rating in 32 games this season.

Former Sabres Tyler Myers and Tim Schaller were in the Canucks' lineup.

Eric Hawerchuk, the son of former Sabres forward Dale Hawerchuk, tweeted Friday night that his father underwent a successful gastrectomy to treat stomach cancer. Dale Hawerchuk, 56, was coach of the Ontario Hockey League's Barrie Colts at the time of his diagnosis this past summer.

Hawerchuk played parts of five seasons with the Sabres from 1990-95. He was inducted into the Hockey Hall of Fame in 2001.