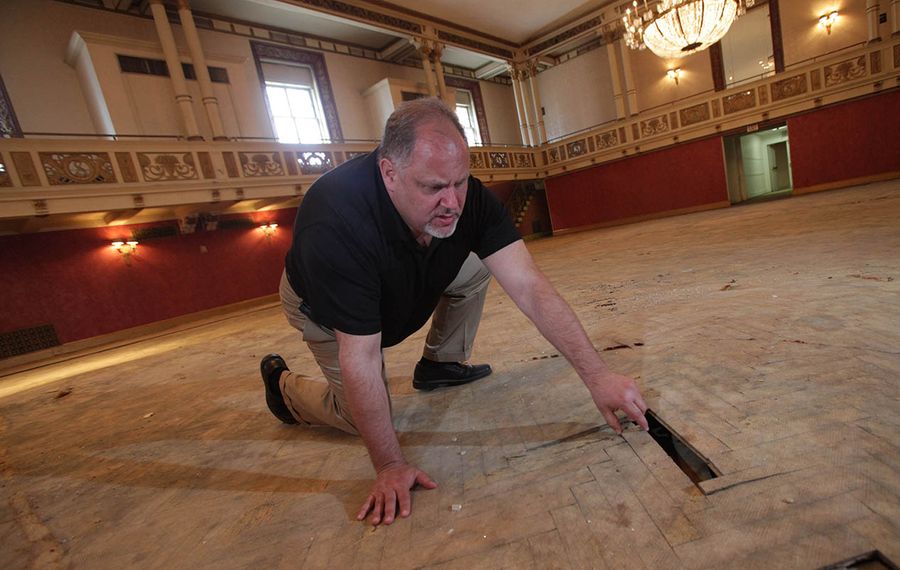 Martin Wachadlo is an architectural historian. In downtown Buffalo, that really means he is a storyteller, because the tale of every civic landmark – restored, dormant or lost to demolition – is far more than a saga of stone, mortar and dust.

Each building, or the place where it once stood, is a collective song of the dreams, visions or struggles of everyone who touched it. You cannot separate Shea’s Performing Arts Center, for instance, from L. Curt Mangell III, the young advocate who slept beneath the roof for a time more than 40 years ago as part of the fierce effort to save it from oblivion.

Any account of the old Post Office pivots on the moment when Erie County Legislators Minnie Gillette and Joan Bozer joined forces. They led an uphill and ultimately triumphant fight in the 1970s to transform the massive, ornate building into an Erie Community College city campus, at a time when many lawmakers would have leveled the place.

In that same fashion, as Wachadlo described Friday in both gratitude and sorrow, the old Statler Hotel on Delaware Avenue will always be associated with Mark Croce, who renamed it "Statler City," built a thriving wedding and event operation on the lower floors and all but dragged the 19-story landmark away from the brink.

“It had slipped back,” Wachadlo said. Without Croce, 58, who died Thursday in a tragedy that has shaken Buffalo, Wachadlo said the future of one of downtown’s most storied buildings was grim, at best.

Croce and a friend, Orchard Park businessman Michael Capriotto, 63, were killed in Central Pennsylvania when Croce's helicopter crashed while they were flying home. Capriotto was a former Orchard Park trustee, “a pillar,” as Mayor Jo Ann Litwin Clinton told The Buffalo News.

As for Croce, with his fullback's stature and tenacity, he would have had a memorable impact on the city even if he never became involved with the daunting challenge of the long road back for the old hotel.

Howard Goldman, a friend for many years, spoke of how he always admired Croce's business instincts and sheer force of will, how Croce "crawled out with his own hands" from some early disappointments to become a major player in downtown Buffalo.

Croce developed the high-end Curtiss Hotel on Franklin Street. He played a key role in the $40 million effort to transform the old C.W. Miller Livery Stable into a second location for the Emerson School of Hospitality. His Buffalo Chophouse was part of the bedrock in the Chippewa/Franklin entertainment and commercial district.

The crumbling Statler, in scope and civic meaning, was on a tier of its own.

Intervening with such a building, longtime Empire State Development chairman Howard Zemsky wrote Friday in an email, is “not for the faint of heart.” 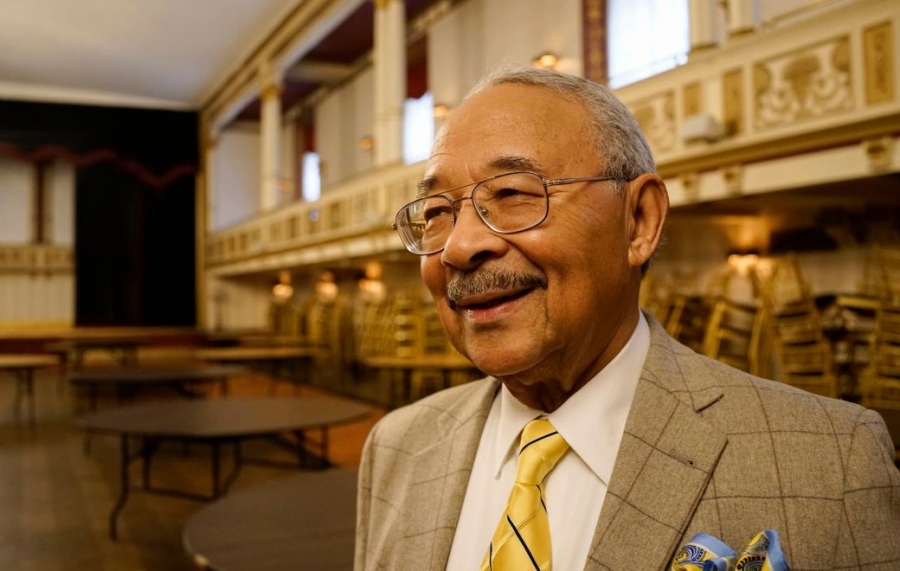 Buffalo's Jim Heck at the Statler City ballroom, in 2018: Heck stopped in at a conference in 1956 in which Dr. Martin Luther King Jr. later spoke in the ballroom. (Derek Gee/News file photo)

Sean Kirst
Back from the brink, Mark Croce's Statler goes on as living statement
In Houston, Bills fans cope with plunge from high to low
A haunting last line for a Bills season of high hopes
The Bills prepare to meet their franchise destiny in Texas
More Stories

The late Richard Shatten, a pivotal planning figure in the long quest for a renaissance in Cleveland, used to say that every city needs projects whose unlikely salvation can rekindle civic hopes. In Buffalo, you might include Shea's or the ECC city campus or the Guaranty Building, landmarks where the simple act of turning on the lights became a larger statement on life and possibility.

Before Croce, it was much harder to envision such an outcome someday occurring at the Statler. In his note, Zemsky wrote that such crumbling landmarks “are costly .... full of surprises and they are incredibly important to preserving our extraordinary history and to reimagining our future.”

While most of the building still awaits restoration, Zemsky wrote that Croce “deserves great credit for taking the first steps toward saving and reimagining the Statler.”

The building's long decline mirrored the dynamics of a staggered city. Opened as a symbol of civic glory in 1923, the last hotel rooms in the tower closed about 60 years later. By 2011, the building was in foreclosure when Croce bought it for $700,000.

At the time, he told Buffalo News columnist Donn Esmonde, he had to step past his own misgivings about taking on a task of such enormous scale. He was reassured by Goldman, a longtime friend and champion of the Statler who for years has been a regular piano player at the old hotel.

Friday night, amid the shock at Statler City, Goldman was back at the piano.

Goldman's advice, and Croce's strategy, was to do it bit by bit. Designed by the New York-based architectural firm of George B. Post and Sons, the building was erected by hotel tycoon Ellsworth Statler as what Chuck LaChiusa, on his Buffalo Architecture and History web page, calls “the grand jewel” in Statler’s national chain.

In Buffalo, which in 1920 was among the nation's 12 largest cities, the Statler hosted some of the greatest names of the 20th century. The Kennedy brothers were among the political legends who walked through the doors. A young Dr. Martin Luther King Jr. spoke there in 1956 at an Alpha Phi Alpha conference that included Autherine Lucy Foster and other giants of civil rights.

Croce used to speak of how Elvis Presley and Frank Sinatra slept inside the building, how it was a destination for unforgettable public figures, performers and artists as they passed through town.

Still, as Wachadlo notes, the deepest meaning does not stem from those big names. It lies instead in the profound connection to generations of everyday Western New Yorkers. Countless families, through weddings or dances or similar events, are linked by memory. Thousands of others waited on tables or cleaned rooms or otherwise earned their weekly paychecks inside those walls.

All of that heritage was as endangered as the old hotel, and all of it passed into Croce’s hands when he decided to buy the place.

“You fall in love with buildings like that even if they keep you up at night, and they become part of your family, literally and figuratively,” wrote Zemsky, who got his own taste of it in the Buffalo complex known as Larkinville. “I suspect Mark felt that way, and we should remember him for his imagination and his determination.”

While many hurdles still remain, and the Statler will need massive investment at some point to reopen many floors,  it is hard to envision what might have happened without Croce. Many, including Wachadlo, say the building would have been at high risk of demolition. "Purgatory” is the word used by Zemsky, the fate where a building without  support or resources slips farther and farther from the point of reasonable hope.

Catherine Schweitzer, executive director of the Baird Foundation and a member of the Buffalo Preservation Board, said Croce was a longtime friend who represents a vast civic loss. At a critical downtown moment, she said he rejected decades worth of entrenched skepticism to always "move toward possibility." She said he had an understanding that success involved a kind of municipal "authenticity," and he always expressed faith that a larger vision would bear fruit at the Statler, even if it took many years.

In the early part of the decade, Croce invested $7 million in transforming the first three floors into an events center, popular for weddings. Last April, Jonathan Epstein of The News reported that Croce would spend another $3 million on extensive façade improvements.

After that work was finished, Croce told Epstein, he expected to move on to roof repairs and upgrading the fire and sprinkler systems, “and then we'll look to the next phase of getting investment capital to bring the building back."

Croce was aware of how the Hotel Syracuse, a smaller but similar hotel also designed by the George B. Post firm, was restored a few years ago behind more than $70 million in investment. He spoke of a mixed-use plan for the Statler that involved residential units on the upper floors, and he had already presented a public vision for tying Statler City into whatever the future holds for the Buffalo Niagara Convention Center.

The families and friends of Croce and Capriotto are still facing the shock of such a loss, a void far transcending any thoughts of property. Yet Wachadlo, who sees the many pivots in the changing face of Buffalo's downtown as part of an intense cascade of motion or mistakes built upon passion, knows Croce’s role already goes beyond appreciative memory.

The greatest moment in his long career has yet to come, reserved for the instant when all the lights once again are turned on inside the Statler.