An unseasonably high amount of Gulf water vapor will be streaming across the Midwest, the Great Lakes, and into Ontario this weekend. These plumes of moisture can be seen on the water vapor imagery from the GOES East satellite.

As a result, a flood watch (not yet a warning) will be in effect for all Western New York, excepting Allegany County, from Saturday afternoon into Sunday afternoon.

We will be escaping the worst of the effects from a series of low-pressure waves moving up along a stalled front to our west, which will eventually clear through as a cold front early Sunday. Both Friday and Saturday will bring a large scale threat of violent storms, including tornadoes, to parts of the southern plains and the Gulf states. You can keep track of ongoing severe thunderstorm and tornado watches on this Storm Prediction Center/SPC link.

Western New York may hear a few rumbles of thunder Saturday, but there is no indicated threat of severe storms.

We will also escape the threat of an ice storm, which will be occurring to the north and northwest of our region, where very shallow freezing air will undercut the warm and very moist air aloft.

The key elements for us will be copious rain and possibly some strong wind gusts Sunday morning. How much rain might we see? Let’s begin by pointing out the heaviest rain in Western New York will fall on the Niagara Frontier, not the Southern Tier. Here is a national estimate from National Weather Service headquarters:

If you look very closely at the legend and the coloring over our region, you can see the heaviest amounts will tend to be closer to the Niagara River and Lake Ontario, with lesser amounts to the southeast. The best chance for rainfall in excess of 2 inches will be from the Buffalo metro area to the north. Small stream flooding on Buffalo area creeks will be possible by late Saturday night into Sunday, and in poor drainage areas, there could be some localized urban flooding.

So, it’s a good time to check up on your sump pumps and make certain storm drain openings are clear of blocking debris, if you live in a flood-prone subdivision.

Rainfall output from this high-resolution model matches up with well with the trends I’ve outlined.

Since no one model has “all the answers,” there are a couple of models that will bring heavier rain a bit farther south, and others that keep the heaviest rain farther north and west. One fly in the ointment is the forecast strong low-level jet stream, which could enhance rainfall amounts a little beyond model projections. Again, that jet structure would be most likely over the Niagara Frontier. That favors the location of the heaviest rain there, rather than farther south and east.

In any case, the rain will not have a constant presence. Because waves of low pressure will be moving along the front, there will be some lulls in the rainfall. The rain will tend to be more showery and intermittent south and east of the metro area. The wettest period appears likely to be Saturday afternoon and evening.

Update: The damaging wind threat has dramatically increased for early Sunday. The high wind watch has been elevated to a high wind warning for all of WNY except Allegany County. A huge jump in barometric pressure with an especially fast low level jet stream aloft will follow a sharp pressure fall and cold frontal passage. This sequence will produce a 3- to 5-hour window of powerful and potentially destructive winds across most of WNY from near dawn through late morning. Some peak gusts may reach 70 mph. Scattered power outages can be expected, with downed tree limbs and trees. The sodden soil from tonight's heavy rain will add to the tree risk. Winds of this magnitude will surely produce a seiche on Lake Erie and cause lakeshore flooding from Chautauqua to northern Erie counties. People should take precautions to protect vulnerable items and property now. Since these will be southwest winds, I would strongly advise against parking your vehicle northeast of a vulnerable tree. The tight spacing of those thin black lines/isobars is an indicator of potentially damaging winds: 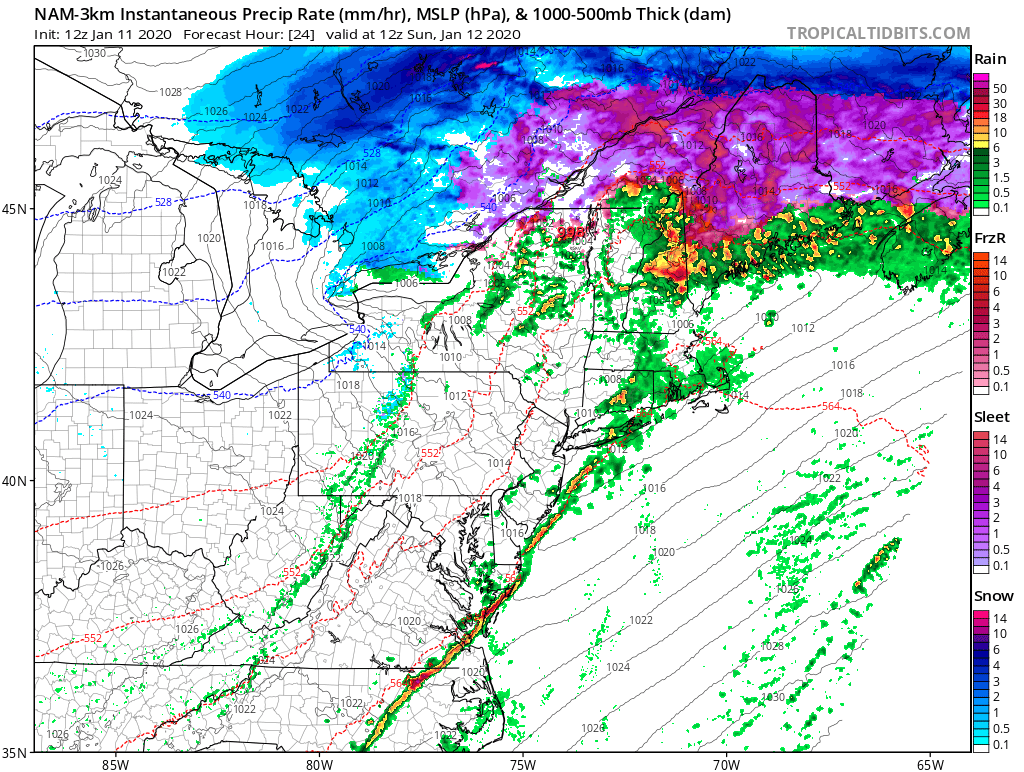 There will be a few rain and eventual wet snow showers as temps fall into the 30s by midday. However, Sunday will be the drier of the two weekend days.

Wet weekend aside, the colder air moving in Sunday is not a precursor to a wintrier pattern. We’ll be back to the 40s by Tuesday and Wednesday.

There are some signs the polar vortex may stretch out and allow more entryway for arctic air into the Midwest and Great Lakes later this month, as posted by Dr. Judah Cohen, a long-range specialist:

I haven't had much reason to tweet #PolarVortex (PV) animations lately, but this morning's GFS predicting a stretching of the PV which should allow at least a temporary injection of #cold air into Siberia and especially Canada. Will be interesting to see if it can evolve further. pic.twitter.com/msnxgylDB5

This trend in the polar vortex has only been showing up in the last two days, so it’s nowhere near a lock. If the trend holds in future model runs, there could be some better news for skiers and resort operators. For snowmobilers, it would take a more persistent pattern change than can be foreseen now. I will update the forecast if necessary during the weekend.