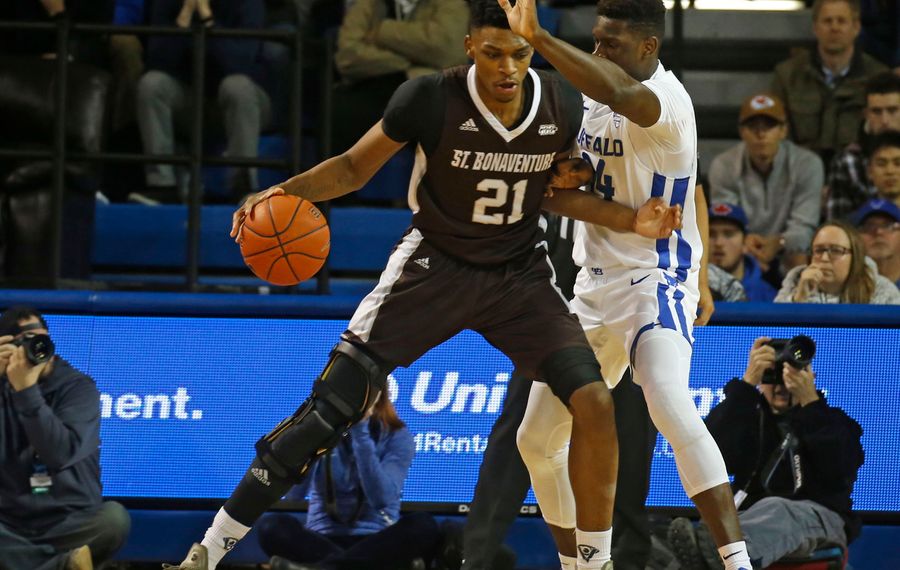 He established himself as an inside presence and a Division I prospect as a high school senior in New Jersey, when he sprouted to 6-foot-9 and used his length and speed to beat players to the ball.

But the year before he joined the St. Bonaventure men’s basketball team, he attended Putnam Science Academy in Connecticut, where he faced big men who played just like him. Who beat him. And who distracted his timing so much that for a short time, blocking a shot wasn’t a second-nature impulse anymore.

Now a 6-10 sophomore center/forward with the Bonnies, Osunniyi enters the weekend with 36 blocked shots in 11 games, and is sixth in the nation with 3.3 blocked shots per game. He is averaging 2.84 blocks per game over his first two seasons, and has at least five blocks in four games this season.

Osunniyi is one of the Atlantic 10 Conference’s top shot-blockers, but he had to evolve as the Bonnies face different teams and different inside players.

“Blocking shots is something I’ve always been able to do, since high school,” said Osunniyi, who has a 7-foot-8 wingspan. If measured vertically, that is two inches more than the height of Yao Ming. “It’s a timing thing that I’ve had, and as you play different players and different teams, timing is everything. And even when I struggled, I always worked on timing and skill.”

'He figured it out'

In his first three years at Mainland Regional High School in Linwood, N.J., Osunniyi was a 6-6 perimeter player whose future in basketball, Mainland coach Dan Williams said, was likely going to be at the Division III level.

But Osunniyi grew three inches prior to his senior year. He started making plays offensively and defensively that were almost second-nature, ones that caused other coaches to tell Williams, “Division III players just don’t make plays on both ends of the court like that.”

One of those coaches, Williams, said, was Tim Legler, a former NBA player and current ESPN basketball analyst, whose son, Ryan, played against Osunniyi in a preseason scrimmage between Mainland and Wildwood (N.J.) Catholic in 2016. Legler encouraged Williams and Osunniyi to make a highlight tape that could be sent to coaches. Osunniyi originally committed to La Salle and coach John Giannini in March of 2017, but planned to enroll in prep school for a year as La Salle did not have an open scholarship for 2017-18.

Blocking shots, Williams said, was almost innate for Osunniyi, who averaged 5.6 blocks per game, 14.4 points and 11.4 rebounds in his senior year at Mainland.

“To do it at a level he’s going to do it at, it has to come instinctively,” Williams said. “He knows his strengths. He knows he can fly up and down the court and beat other bigs, and that puts him in a position to be there and block shots, because of his long strides and his ability to run. He runs down guards and lets them stay half a step ahead of him, then he goes up and beats them.

“He really knows where to go and meet the ball. I’d have no way to teach him that skill. He enhanced it at Putnam, and he’s doing it again at Bona.”

Putnam coach Tom Espinosa knew he was getting a shot-blocking wunderkind of sorts in Osunniyi.

At Putnam, though, he didn’t block his first shot until January, nearly two months into the season.

“His timing was off and he couldn’t block anything,” Espinosa said. “I don’t know what happened to cause that, but for him, it was about building his confidence and learning how to play at a high level.

That comprehension resulted in something more. Osunniyi led Putnam in the number of charges he took. His game became more well-rounded, and more colleges were interested in a player who could block shots and read the court.

He helped Putnam finish 38-4 and win the national prep school championship in April of 2018. He averaged 10 points, six rebounds and three blocked shots. Osunniyi was named MVP of the national championship game, a 74-66 win against Northfield Mount Hermon of Massachusetts.

“He was playing in an environment that was about as close to college basketball as you can get,” Espinosa said. “Osun and a lot of guys, especially big guys, aren’t used to how physical it is. By the end of December, things started going his way and he started seeing that if he worked hard, good things were in front of him.

“When he came back from break in January, he was a different player. He struggled with how fast the game was, at first, and how big his opponents were, but he got used to it, he got that experience and he stayed positive.”

Bouncing back from setbacks

Osunniyi reopened his recruitment on May 2, 2018, as he was finishing his postgraduate year at Putnam after La Salle fired Giannini. Three weeks later, he announced that he had committed to Bona.

Osunniyi averaged 7.5 points and 7.6 rebounds as a freshman in 2018-19, and he became one of the nation’s top shot-blockers. He was sixth in the nation and led the Atlantic 10 with 92 blocks in 34 games, which is the second-highest single-season total in program history.

He missed four of Bona’s first five games because of an injury to his right knee sustained in the second half of Bona’s season opener Nov. 5, a 65-53 loss to Ohio.

Bona guard Kyle Lofton said his roommate’s absence on the court was noticeable.

“That presence is big,” Lofton said. “We lost four games without him, and he does so much for us. Rebounding, he can set screens, he can roll hard to the basket and he can block shots. Whatever he does, he’s going to help the team, and if we have any slip-ups, he’ll help us recover.”

Osunniyi blocked three shots, but scored only six points and had a season-low four rebounds. He was rendered ineffective inside, got into foul trouble early in the first half, then fouled out with 4:37 left in the game.

Osunniyi responded in compelling fashion. He scored a career-high 20 points on 8-for-8 shooting, had nine rebounds and blocked five shots in a 71-66 win Jan. 5 at George Washington in the Bonnies’ A-10 opener. Three nights later, Osunniyi had a season-high 18 rebounds and three steals, and added five blocks, eight points and four assists in a 61-49 win at George Mason.

“That game (at UB) motivated me,” Osunniyi said. “Because I saw how if I don’t play the best that I can play, I saw how the team is affected. Our coach always tells us that we have to play our best, because if our best players play well, then that’s how we’re going to win games.”