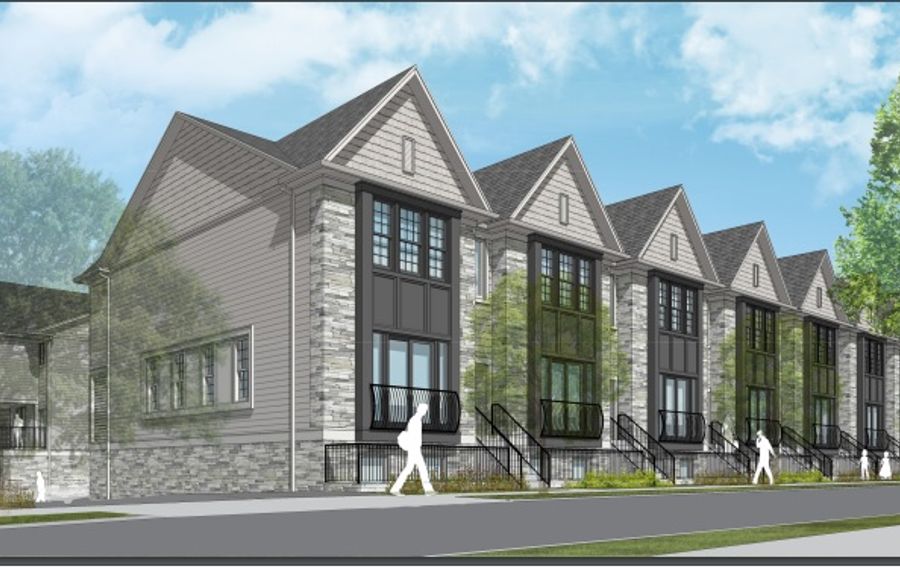 As Sinatra & Co. Real Estate and Ellicott Development Co. await a Planning Board ruling on their proposed new day care project on Hodge Avenue, the duo behind the Elmwood Crossing redevelopment in Buffalo are moving forward with a townhouse project one block over.

The firms led by Nick Sinatra and William Paladino are proposing to construct 20 new for-sale townhouses in three separate groups on West Utica Street. They are working with homebuilder Essex Homes of Western New York.

Plans by Carmina Wood Morris and CJS Architects for the Parkhurst Green project call for eight units in the first "linear block," to be located along the street at 188 W. Utica. The other two groups will have six units in each, and will be located in the rear of the site.

Each townhouse will be three stories in height, which is "consistent with the scale of the surrounding neighborhood," said Ellicott Director of Development Tom Fox in a letter to the Planning Board. The 2,500-square-foot units will have either two or three bedrooms and 2.5 bathrooms, depending on the preferences of the buyers.

Each unit will also have a two-car garage with a private patio space above it, in the rear, for a total of 40 resident spaces. There will also be a 16-space surface parking area for visitors, according to Planning Board documents.

The front facade has been designed to look like an urban rowhouse, with an elevated main entry for visitors, Fox said. There will also be balconies with black metal railings.

Located on the south side of West Utica just east of Elmwood Avenue, the 1.28-acre property is currently a parking lot, with two vacant residential houses at 180 and 184 W. Utica that are to be torn down as part of the project. The site is also in the state Brownfield Cleanup Program.

Another rendering of the West Utica Street townhouses, part of the Elmwood Crossing redevelopment project. (Photo courtesy of Buffalo Planning Board)

The Planning Board will review the project at 4 p.m. Jan. 13 at City Hall. The board has recommended approval by the Common Council of a request to rezone the two residential parcels to "mixed-use edge district," matching the parking lot zoning. But preservationists object to the planned demolition of the two houses, which they say are "contributing structures" to the Elmwood Historic District-East.

This is the third project within the $100 million plan for Elmwood Crossing, which is the redevelopment of the former Women & Children's Hospital of Buffalo campus in the Elmwood Village. Plans call for converting the eight-acre site with 600,000 square feet of existing buildings into a new mixed-use community, with more than 220 apartments, 27 condominiums, 22 townhouses, a 75-room hotel, an urban grocery, boutique shops, office space and the day care.

Sinatra and Ellicott have started construction on the first piece – a five-story mixed-use building at the corner of Elmwood and Bryant Street, with retail space, offices and apartments.

They've also completed environmental reviews and obtained city approval – over significant neighborhood opposition – of a planned-unit development designation for the entire site, which will unify the campus under one set of zoning and land-use rules. And they're negotiating a purchase contract for the Gallagher Parking Ramp.

But the second phase – converting the former Hodge Pediatrics building at 125 Hodge St. into an EduKids day care – has been held up by criticism over the design. Area residents – and even Planning Board members – said it didn't fit with the community around it, and looked more like a suburban development than one in a historic city neighborhood.

Plans call for renovating the existing 5,400-square-foot building, and adding a new 5,500-square-foot section. The driveway and entrance to the 600-space parking ramp are connected to a drop-off area for the day care and 13 parking spaces.

The day care would occupy the entire first floor, with up to 125 children from infants to 4-year-olds, and a playground in back, surrounded by a four-foot fence. Meanwhile, a single 700- to 800-square-foot apartment would take up the second floor – enabling the developer to qualify for a lucrative but controversial 485-a tax break that's been widely criticized by community activists.

The project was tabled by the Planning Board in December, but will come up again on Monday.