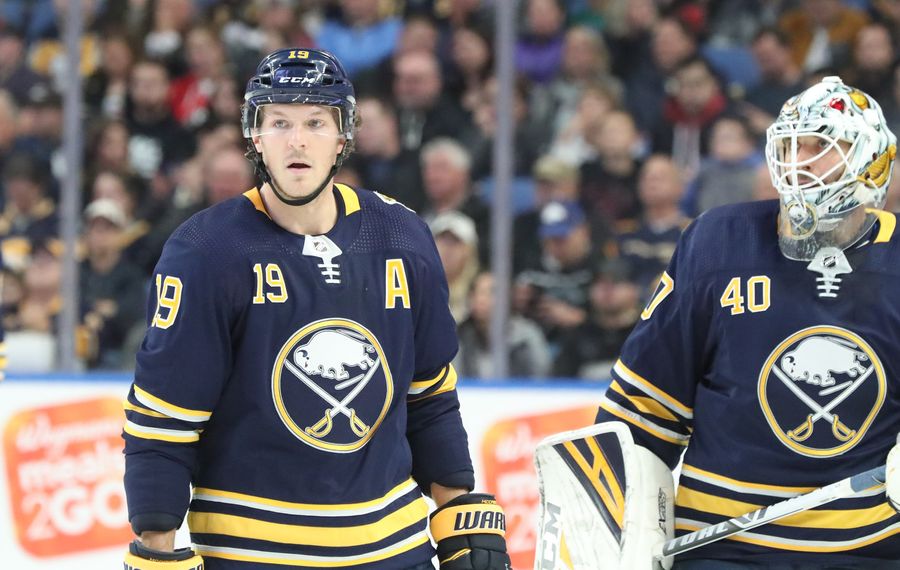 Defenseman Jake McCabe, who missed the loss Thursday in St. Louis with an upper-body injury, returned to practice Friday and is on track to play against the Canucks. Additionally, winger Zemgus Girgensons is expected to play after missing practice Friday for what the Sabres called "maintenance."

McCabe, 26, has two goals among seven points and a minus-3 rating in 41 games, and he's averaging the second-most ice time among Sabres' defensemen. Krueger did not reveal when or how McCabe suffered the injury.

McCabe had one shot on goal with a minus-1 rating in 18:44 of ice time last Saturday against the Florida Panthers, but he was a limited participant in the Sabres' skills challenge Sunday and did not practice prior to the team's 5-1 loss Thursday to the Blues.

If McCabe returns, he will give the Sabres eight healthy defensemen against the Canucks. Lawrence Pilut, who played 19:42 against the Blues in his season debut with Buffalo, is still with the team and was paired with Henri Jokiharju during practice Friday.

Girgensons' availability could factor into Krueger's decision to use 11 or 12 forwards against Vancouver. Girgensons had a minus-3 rating in 11:37 against the Blues. If Girgensons is unavailable, the Sabres may dress Zach Bogosian, who is among their top contributors on the penalty kill.

Krueger told reporters following practice Friday that Jeff Skinner is "on track" in his rehab from an upper-body injury suffered Dec. 27 against the Boston Bruins. Skinner has missed five games after sustaining the injury on a hit by David Pastrnak and was expected to return in three to four weeks.

"He’s been extremely positive, working hard with the rehab," Krueger said. "So far, everything feels on track. Whatever that track will be, his body will decide it. He’s working hard with the rehab group, and he also has the opportunity to watch us from the outside. We’ll be tapping into that growth opportunity with him, too. Still talking hockey with him as he rehabs."

Jimmy Vesey is the next Sabre up on the top line. The 26-year-old skated with Jack Eichel and Sam Reinhart in practice Friday after the trio logged 8:26 of ice time together at 5 on 5 against St. Louis. The Sabres had more 5-on-5 shot attempts (8-4) than the Blues with Vesey, Eichel and Reinhart on the ice together.

Vesey, who was acquired from the New York Rangers in July, has five goals among 13 points in 41 games with the Sabres. He has only two shots on goal in his past five games and scored 50 goals over his three seasons with the Rangers.

"To be honest, I think I need to shoot more," Vesey said. "I don’t know, I’ve passed up a couple in the last two games. ... So I think I got to get back to the shoot-first mentality, and I’d like to score more goals in front of the net. I think I’ve done that in my career. I don’t think I’ve had as many opportunities right on top of the crease. So I got to get myself there."

This will be the final matchup between the Sabres and Canucks during their 50th anniversary seasons. Vancouver (23-17-4) entered Friday three points out of the Western Conference's second wild-card spot and has lost back-to-back games since having its seven-game win streak end with a 9-2 loss at Tampa Bay on Tuesday.

Canucks center Elias Pettersson, who won the Calder Trophy over Rasmus Dahlin in June, has 20 goals among a team-high 46 points in 44 games.

"Everyone knows how dangerous he is," Dahlin said of Pettersson. "Hopefully we can stop him."

Linus Ullmark's run of consecutive starts is likely to end this weekend with the Sabres hosting the Canucks on Saturday at 1 p.m. and facing the Red Wings in Detroit on Sunday. Ullmark has started 13 of the past 14 games, including eight in a row.

Ullmark has a .896 save percentage over his past seven starts, and Carter Hutton has not been in goal for the Sabres since a 6-1 loss to Philadelphia on Dec. 19.