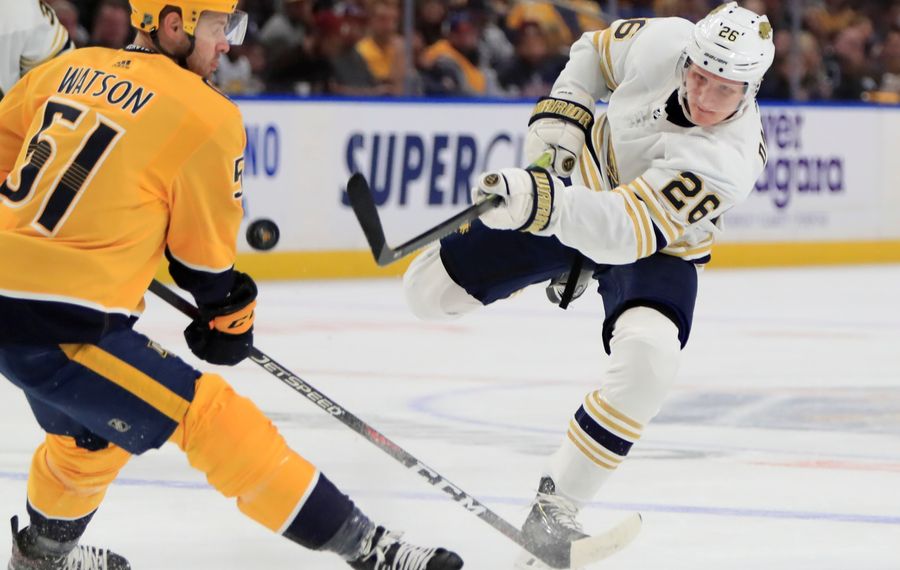 The defending Stanley Cup champions prefer to use man-to-man defense, particularly against a superstar talent such as Jack Eichel. When Eichel circled around the back of St. Louis' net in the second period, Dahlin moved into the left-wing circle and set a pick by lowering his shoulder into Blues defenseman Vince Dunn.

"I saw the opportunity," Dahlin, 19, acknowledged following practice Friday. "I know Eichs likes to skate with the puck, so I tried to pick two guys to give him some room."

The pick, which the linesmen mistook for incidental contact, allowed Eichel to cut toward the slot and unleash a wrist shot for the Sabres' only goal in a 5-1 loss. The sequence illustrated how Dahlin is making a significant impact without the puck in his second NHL season.

The Sabres, though, need Dahlin to make more of an impact with the puck. Coach Ralph Krueger is using video to show Dahlin that his left-handed shot could ignite Buffalo's struggling offense.

"More than anything you have to show him what it creates, and we need to create more second chances," Krueger said."It’s going to come primarily from the defensemen getting pucks to the net. We’re working on that kind of imagery so that he sees it in his head. That will then release him to make the brilliant one-on-one move."

Shooting was a focus of Dahlin's over the summer. He estimates that he took 100 during each of his on-ice offseason workouts, yet the former first overall draft pick has rarely unholstered the weapon this season.

Entering Friday, Dahlin ranked last among qualifying Sabres in 5 on 5 shots per 60 minutes, and his total shots per game ranked 12th. Over his past 25 games, Dahlin has recorded more than two shots only four times, despite ranking third among the team's defensemen in average ice time this season.

Dahlin quarterbacks the Sabres' top power-play unit, however, he typically uses his vision and elusiveness to try to create room for Eichel or Victor Olofsson, who is expected to miss the next four to five weeks with a lower-body injury.

Predictability has factored into the Sabres' power-play woes. Opponents game planned against Eichel and Olofsson. Shots from the point could create rebounds in front of the net or create more space for forwards.

"If he’s a shooting threat they’re going to play him different and defend against him differently," Krueger explained. "It’s the same for the power play. We all know that’s no secret. We need to get more of a shooting threat in our power play, and it begins at the top. He’s so coachable and so excited to see these kind of secondary opportunities that we can create. I know he’s going to find a way to get more offense out of his shot."

One of Dahlin's two goals this season occurred on the power play, and he ranks third among all Sabres with 22 shots on the man advantage. For context, Los Angeles' Drew Doughty leads all NHL defensemen with 47 power-play shots, though he has appeared in 10 more games than Dahlin.

The Sabres' languishing power play entered Friday ranked 22nd in the NHL and had the sixth-fewest shots on goal. It had earned only 14 goals on second-chance opportunities. Dahlin has also deferred at 5 on 5, registering only 31 shots in 36 games, the fewest among the team's qualifying defensemen.

"That’s a thing I always want to improve on," Dahlin said. "I try to find my lanes. I have to get more of a shot mentality. When I see a lane, I take it."

Video is one pillar of the player development model used by Dahlin's former team in the Swedish Hockey League, Frolunda. He and his former teammates would be shown an entire game, rather than cut-ups of certain plays or sequences.

The process taught him the value of watching video to learn from his mistakes and confirm positive aspects of his play. He's now using it as a tool to gauge when he should pinch in the offensive zone or join his forwards rushing up the ice. Weighing risk versus reward is an important part of a defenseman adding offense.

"You need to find a balance there," Dahlin said. "Sometimes it’s difficult to really know if you can go all the time or if you have to defend. It’s a tough balance. When you find the opportunity it’s pretty good. When you’re wrong, it can affect us really bad."

Despite the low shot totals, Dahlin has two goals among 23 points with a minus-1 rating through 36 games. He has one goal among seven points in 12 games since returning from a concussion Dec. 12. Dahlin is also the Sabres' candidate for the NHL All-Star Game's Last Men In balloting.

Dahlin has blossomed in Krueger's defensive structure. While Dahlin has struggled at times against opponents' top forwards, he is no longer being out-muscled in front of the net or turning the puck over under pressure. His evolution without the puck came following a difficult start to the season.

"We all see the offensive inputs and how we missed him dearly when he was gone, whether it was on the power play or generally what we can create," Krueger said of Dahlin. "He just needs to continue to work on his strength, which is a natural evolution of somebody that age and that whole battle level that’s needed for 82 home and away games throughout the season. ... We like his game away from the puck, the way it’s growing, but that would be, for me, the next step – continuing to confirm what he’s shown us here the last few weeks defensively."

Dahlin's play-making ability made him a Calder Trophy finalist last season. His 44 points were the second-most in NHL history by a defenseman ahead of their 19th birthday, trailing only Phil Housley.

Following his rookie season, Dahlin was determined to physically prepare himself to withstand the rigorous 82-game NHL schedule. A concussion forced him to miss eight games earlier this season, yet he's again showing why he's a cornerstone of the Sabres.

Following back-to-back games with fewer than 20 shots, the Sabres need Dahlin to be part of the solution.

"I’ve felt good," Dahlin said. "Better, more confident. I think it’s my overall game. When you feel calm out there, it gets easier in both zones. I know I can play good in both zones."