Somerset Supervisor Daniel M. Engert turned 50 Monday, and marked the occasion by retiring from the Niagara County Sheriff's Office, where he was deputy chief of the County Jail.

The next day, he resigned the town supervisor post he has held for eight years, to which he was re-elected two months ago. 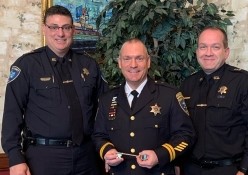 Engert said Wednesday he's moving to northeastern Florida, where, starting Monday, he will earn $96,000 a year as chief of detention and court services for the Flagler County Sheriff's Office.

In Niagara County, Engert worked 29½ years at the Sheriff's Office. He had been deputy chief of the County Jail since 2014. He said he was one of 60 candidates who applied for the Flagler County post in a nationwide search last fall, and was offered the job in December.

Engert said he will serve as a consultant to Somerset this year, receiving $9,097, or half of the supervisor's budgeted salary, to administer grants the town has received for park development and Lake Ontario shoreline protection.

The other half of the money goes to Jeffrey M. Dewart, the councilman who was appointed supervisor by his Town Board colleagues Tuesday.

Engert was front and center during the town's five-year fight against a major wind power project proposed by Apex Clean Energy, a Virginia company.

The company sought to erect 47 wind turbines, each nearly 600 feet tall, in Somerset and neighboring Yates. The towns surveyed residents and both found that about two-thirds of them opposed the project.

Somerset spent about $300,000 in fees for lawyers and expert consultants in the battle against the wind project.

Last spring, Apex closed its local office, leading Engert to declare the project dead, although the company has not acknowledged that.

"I will be providing consulting if Apex decides they're going to come back into the town," Engert said. "I'm proud of my record here."

Besides fighting Apex's Lighthouse Wind project, Engert leaves behind a plan in which a town park and a data center would be sited on the property of Somerset Operating Co., which just mothballed a coal-burning power plant on the lakeshore.

Engert was paid almost $99,000 last year by the Niagara County Sheriff's Office, but he said the Flagler County job, despite slightly lower pay, is a better deal because Florida has no state income tax. In addition, he will collect a pension from New York State.