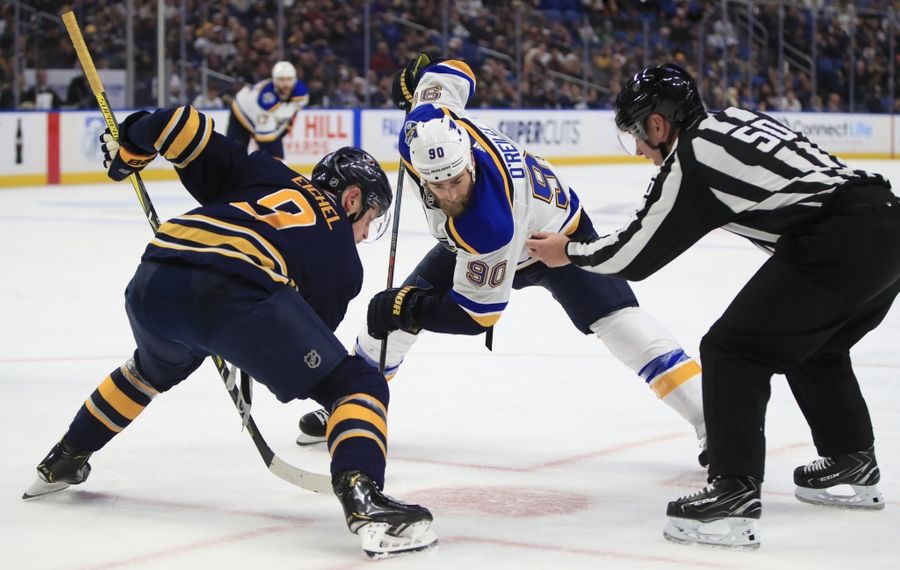 ST. LOUIS – For a team desperate to get points, especially on the road, this is not the best place for the Buffalo Sabres' first game away from KeyBank Center in the new decade.

The Enterprise Center has always housed a good team and now it's the home of the defending Stanley Cup champions. And whether they've been big winners, a middle-of-the-road club or a bottom feeder, the St. Louis Blues have given the Buffalo Sabres big trouble here in the shadow of the Gateway Arch.

The Sabres are 0-5-2 in their last seven games here and have not won in St. Louis since a 5-3 victory on Dec. 27, 2009. It's one of their four worst current road droughts in the league. They've been outscored, 26-10, and been held to two goals or less in all seven games.

Last season's game here was a microcosm how the season changed for both teams. When the Sabres took the ice here on Dec. 27, 2018, they were 15 points ahead of the Blues in the NHL's overall standing (47-32). The game, a 4-1 St. Louis victory, came a little more than a week before the Blues changed their season by calling up goaltender Jordan Binnington from the minor leagues.

Starting from that night they met, the teams had a 38-point turnaround – St. Louis finished with 99 en route to its eventual run to the Cup and the Sabres finished with just 76 and sent coach Phil Housley packing. St. Louis was 31-12-5 in that stretch and Buffalo went 12-28-5. Yikes.

Sabres look to correct struggles away from KeyBank Center

"They’re skilled guys, good players. But (Jack) Eichel’s the guy," Blues coach Craig Berube said today. "We didn’t do a good enough job against him last game. He ended up getting the game-winner. We left him alone. We’ve got to be tight on him, we’ve got to take time and space away from him. He’s a smooth hockey player. Good player."

Based on yesterday's practice, Evan Rodrigues would be one healthy scratch. An 11-7 alignment would likely mean Scott Wilson would sit as well. Zach Bogosian would likely be out of the lineup in a 12-6 setup.

By the numbers: The Blues have yet to lose in regulation when they score first (19-0-5) and are the only NHL team that can make that claim. Both teams have been ultra-strong when leading after two periods as Buffalo is 15-1-0 and St. Louis is 17-0-5.

"They lost in our building, they're going to be hungry. They're going to be ready," Sabres coach Ralph Krueger said today. "We're expecting a really tight, strong one-goal game today and the team that scores first is definitely going to have an edge."

It will be interesting to see how the Sabres start, given that they haven't played since Saturday's win over Florida.

"After five days without a game, it seems like forever. It's been Sweden since we had this type of a break," Krueger said. "It's going to be important to get a good start here. We all know we need to activate our game plan pretty early. If we wait and hesitate, they'll take advantage of that. An excellent start will be important."