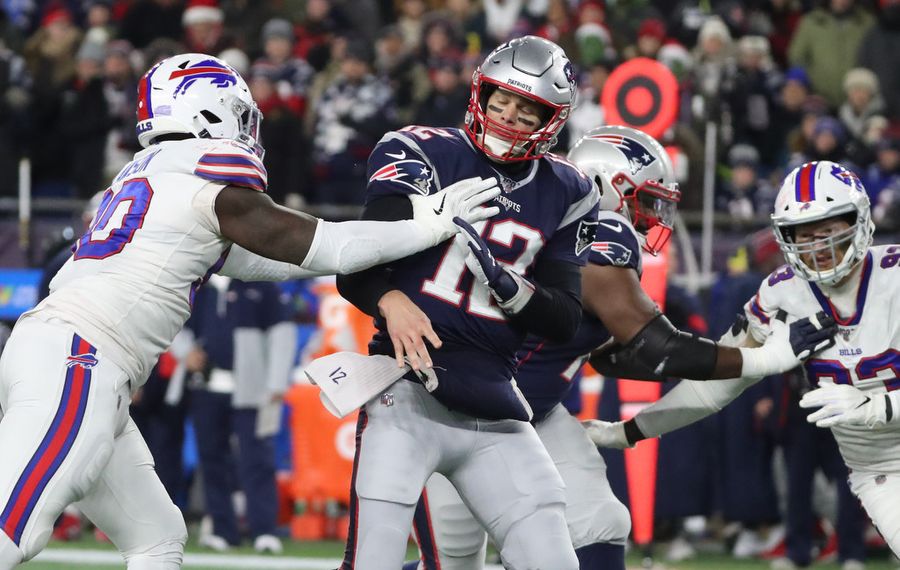 A question mark has been hovering over Foxborough, Mass., for awhile.

It was there even as the New England Patriots sat in first place in the AFC East throughout the 2019 season, thanks largely to uncharacteristic struggles on offense. It continued to cast a shadow even as they beat the Buffalo Bills on Dec. 21 to seal an 11th consecutive AFC East title. It only grew larger when the Pats lost to the lowly Miami Dolphins the following week to wind up having to settle for a rare appearance in the wild-card round of the playoffs.

Then, came the big crash last Saturday night. Tennessee Titans 20, Patriots 13, Tom Brady 42 and looking far older and more ordinary than he has for much of his iconic career.

For many Bills fans still reeling from the shock and bitter disappointment of a 16-0 lead evaporating into an overtime loss against the Houston Texans hours earlier, it served as a bit of salve. Seeing the Patriots' season end on the same day as the Bills' is akin to spotting a unicorn.

However, the pendulum could, at long last, be swinging in the Bills' favor. As painful and maddening as it might have been to watch Josh Allen and his teammates blunder their way out of the playoffs, there should be legitimate optimism for the 2020 season – even with what looks like a far more daunting schedule than the Bills had in 2019.

The result of the Patriots' wild-card game against the Titans, on the heels of what took place the previous weekend against Miami, would be sufficient cause to build a fairly solid case that the balance of power could be heading for a major shift.

Brady's uncertain future with the Patriots – whose offense already was severely depleted by the retirement of tight end Rob Gronkowski, a general lack of reliable targets and a consistently effective running game – takes it to an even higher level.

Remove Brady from the equation and it's hardly a stretch to make the Bills the favorite to be the next AFC East champion. As cornerback Tre'Davious White said after the 24-17 loss against New England in December, "With 12 back there, there is always a chance for those guys to win a game. You can never underestimate him. He is one of the best, if not the best, to play the game."

Brady's contract with the Patriots is due to expire in March. On Wednesday, he posted a message, via his Instagram account, to Pats fans. He thanked them for their support and said he felt like he had "more to prove."

However, there was no mention of whether he intended to do that proving as a Patriot. And that's the starting point of an offseason of drama that will likely hold the attention of the rest of the NFL for the next couple of months – and possibly longer.

Neither Patriots coach Bill Belichick nor team owner Robert Kraft has shed any light on the prospect of Brady remaining with the Patriots. Longtime media members covering the team aren't sure of how the situation will play out, with at least one saying he would not at all be surprised by a Brady exit given that he's selling his Massachusetts mansion and the "detached" vibe the quarterback has been sending all season.

Another reporter pointed out that Brady's wife, supermodel Gisele Bundchen, doesn't like living in New England and would prefer to be in New York or Los Angeles. If that latter is true, then there could be merit to speculation that if, in fact, Brady were to return for a 21st NFL season, he might do so with the Los Angeles Chargers, who could be moving on from veteran QB Philip Rivers and desperately need a marquee name to help sell tickets as they prepare to move into the new stadium they'll share this year with the Rams.

For that reason, the Chargers might be able to somewhat justify a massive investment in a quarterback who turns 43 in August. The Patriots, and especially Belichick, would understandably have a second thought, if not two, about going that route.

Without Brady, who has led the Patriots to 32 victories against Buffalo since becoming their quarterback in 2001, there's plenty of justification to move the Bills out of their perennial also-ran status and to the top of the division. The gap between the teams was closing even with him behind center. Allen continues to show more than a few rough edges, but has made progress since his rookie year in 2018. Other pieces are needed on both sides of the ball, but a major makeover isn't required. Sean McDermott and Brandon Beane provide the most solid leadership the franchise has had in a long time.

Look elsewhere in the AFC East and nothing would appear to impede the Bills' path to a title. The Dolphins, who are still searching for a franchise quarterback and trying to get traction under first-time coach Brian Flores, can't be taken seriously as a threat. Nor can the New York Jets, who are still finding their way with their QB, Sam Darnold, and coach Adam Gase.

Retiring linebacker Lorenzo Alexander best summarized where the Bills are in relation to the Patriots when, after the Dec. 21 loss, he said, "Obviously, we have the talent to beat them. We just haven't executed at a high enough level. And when you play championship-caliber teams, you have to do that and we, for whatever reason, don't."

Come next season, one big reason could be out of the picture.