Unlike last January, this month is shedding wintry weather like a burlesque queen, and winter haters are the equivalent of a leering audience. Wednesday, sure enough, has shown up as a wintry day with squally snow focusing more on the hills, including the ski slopes with several inches of new snow. It’s also been the first day in a while with readings falling through the 20s, heading well into the teens overnight. It has been a genuinely cold day.

By Thursday, winter will be heading back into its more common has-been role, with readings moving back above average. With an average high of 32 at this time, Thursday’s high in the mid to upper 30s will be just the start. By Friday, a stiff southerly flow will boost readings to the upper 40s, maybe 50, and push abundant moisture into Western New York. This will all be part of a developing potent frontal zone with waves of low pressure bringing surges of precipitation. Earlier this week, there was some concern the frontal boundary, with a tremendous temperature contrast on either side, might slip to our south and allow a shallow layer of freezing air to come back in from the northeast, behind the front. If that were to happen, our region could have been facing a significant hazard from sleet, freezing rain and eventually snow.

Starting with Friday, we will clearly be on the warm side of the front, and rain will be on the increase.

Even on Saturday, the front will be stationary and to the west of us, keeping WNY on the warm side of the boundary.

The temperature difference on either side of the front will be drastic. On the warm side, here are temperature projections from IBM’s the Weather Company forecast branch, WSI.

That 57 for Buffalo is no typo. Behind this stationary front there is a different thermal story, as seen in temperature output from National Weather Service headquarters:

The temperature of 52 in Detroit and 18 in Marquette, Mich., gives you an idea of what I mean. As for precipitation, rainfall amounts will be heavy, and may pose a limited flooding threat. Here is a five-day projection from NWS headquarters. While this forecast indicates some parts of WNY could see totals exceed 2 inches of rain, these amounts are actually down a little from projections this past Monday and Tuesday.

With that trend in mind, I would rate the flood threat this weekend as low if this range verifies.

By the time the stationary front gets moving and becomes a cold front, crossing WNY during Sunday, the temperature contrast will no longer be as extreme. The American GFS model has been a consistent “outlier” the last few days, and moves the cold air in much more quickly for Sunday, bring WNY a period of sleet and freezing rain before the arrival of measurable snow. Here is a GFS depiction for the wee hours of Sunday morning: 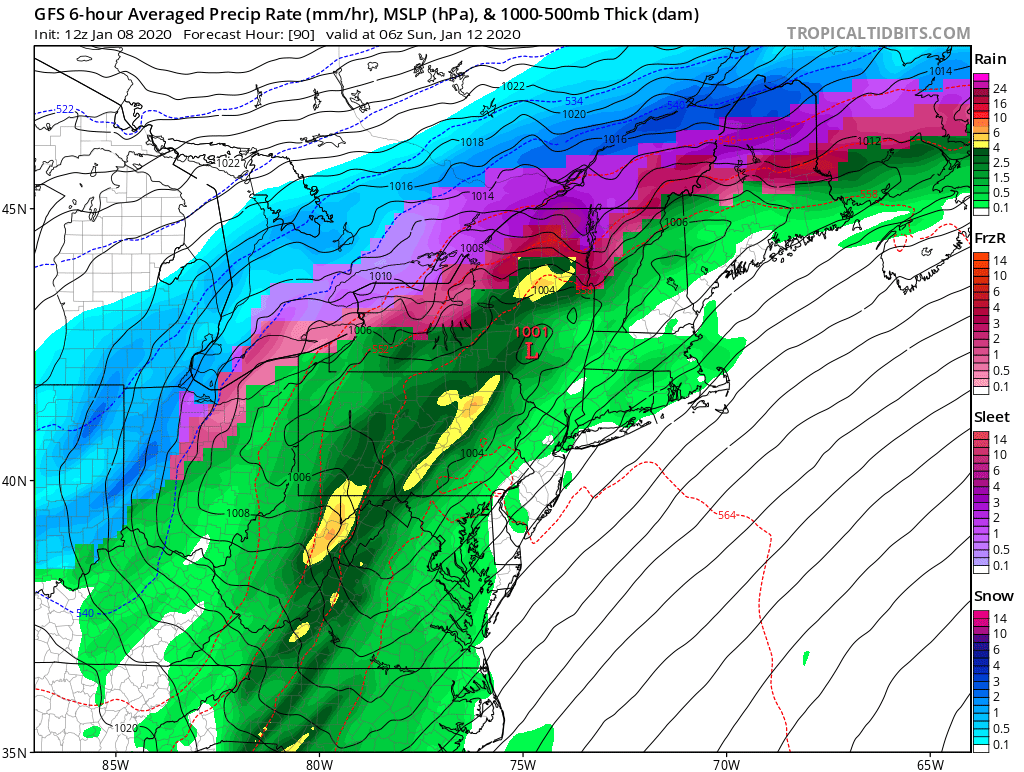 This “outlier” would bring 2 to 4 inches of snow on top of the wintry mix during Sunday. It’s important to remember outliers can verify as accurate but are statistically least likely to verify as the other models depict things quite differently. For example, the Canadian GEM model for the same wee hour period on Sunday looks like this.

The frozen precipitation is well to our north and west and we are still in plain rain. The European model suggests a transition from rain showers to snow showers on Sunday preceded by the same soaking rain on Friday afternoon into Saturday. Sunday there will be a gusty wind and most of the modest accumulation on the hills, not the Niagara Frontier. The outlier GFS has us turning sharply colder much more quickly Sunday but, as outlier implies, the GFS stands mostly alone.

The lack of wintry staying power is evident early next week, once again. By Monday we’re back to the low 40s, and into the mid 40s on Tuesday and Wednesday. Looking out further in time, the model ensemble means (many multiple runs of individual models averaged out) still show no sign of a persistent western ridge of high pressure in western North America forcing a cold trough to develop near the Great Lakes or northeast.

The polar vortex is forecast to remain strong and closer to the North Pole, trapping much of the polar air far to the north most of the time. This is all markedly different from the cold and snowy January of 2019. In this time lapse, note how often a lobe of the polar vortex dropped down close to our neck of the woods.

A reversion to a pattern something akin to this is not out of the question later in several weeks, but there are few indicators pointing in such a direction of persistence. For winter lovers, the absolute least reliable part of the GFS model, Day 16 of 16, does offer what might be meteorological fool’s gold as a glimmer of likely false hope, posted by Michael Ventrice of IBM.