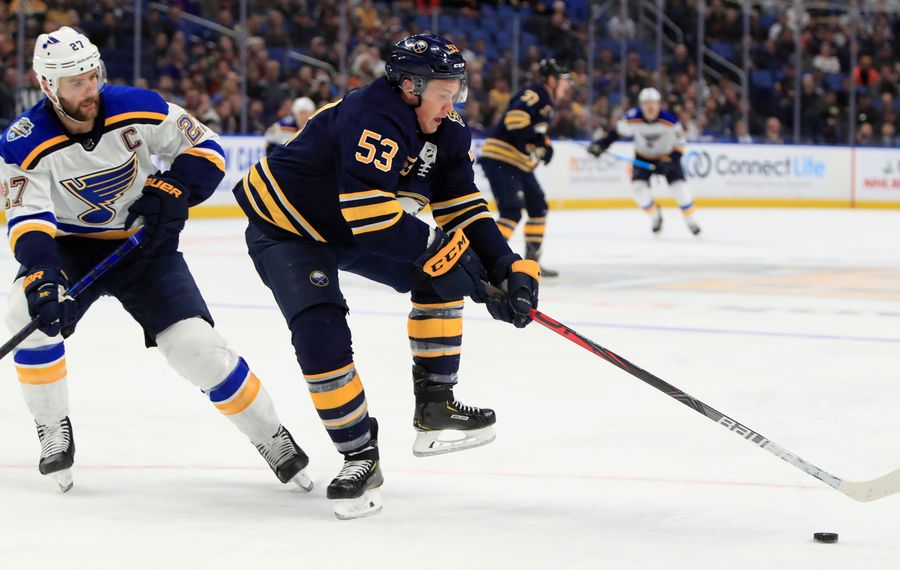 A year ago, Jeff Skinner was in the midst of a career season – a 40-goal, 23-assist performance that was the impetus for an eight-year, $72-million dollar contract extension for a Sabres team in dire need of a high-end scoring winger.

Year 1 of Skinner’s new deal hasn’t exactly gone to plan, notwithstanding that he is currently sidelined three to four weeks with an upper body injury suffered Dec. 27. At the halfway mark of the regular season, Skinner is pacing for a 23-goal and 17-assist season. That’s very different from last season’s output, and increasingly a concern for a Sabres team that heavily invested in the 27-year-old last summer.

But we have seen this story a couple of times before from Skinner, most notably during his final season with the Carolina Hurricanes. What was billed as a disappointing season – one that surely soured Carolina’s front office, and perhaps some bidders around the league – was a lot more about the struggles of Skinner’s teammates than the struggles of Skinner individually. The bet at the time was that an increase in quality of teammates, be it in Carolina or another hockey city, would spark Skinner’s production again.

A new coaching regime has ushered in a new era of deployment this season – Skinner was the trigger man on an elite line last year, he’s now anchoring a middle-six line regularly featuring Marcus Johansson, Conor Sheary and Vladimir Sobotka.

Qualitatively, it is not hard to see how and why Skinner’s point production might be down. But consider just what type of offensive burden Skinner carries on such an offensively challenged line. At 5-on-5, he is uniquely responsible for a significant piece of the offense. In other words: If he’s not scoring, no one is. 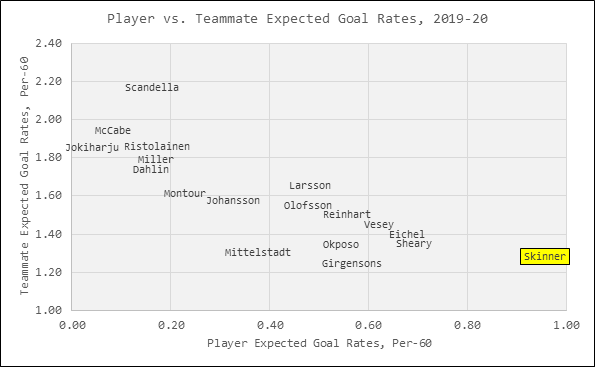 Think about this: At 5-on-5 during the 2019-20 season, Skinner is responsible for just more than 30% of the team’s offense. That means Skinner’s four teammates – regardless of which teammates they have been over the course of the season – combine for the other 69%. That is a substantial burden, and not one shared by the other Sabres forwards. Eichel (23%), Reinhart (21%), and Olofsson (19%) are not surprisingly much closer to the league average (21%).

What happens when players see such limited help around them? Their points tend to drop, unless their teammates have a rash of puck luck. Skinner’s 11 goals seem paltry, but remember that those 11 goals are equivalent to the same number of goals all his teammates have scored in substantially more minutes. Even looking at other top-six skaters around the league, it’s hard to find a comparison for Skinner here:

There is a secondary issue at play, and it’s the fact that Skinner’s been stuck on zero on the power play in more than 114 minutes. Last season, Skinner had eight power-play goals (or, 1.9 per 60 minutes of play). But Skinner isn’t alone in his power-play struggles – almost every Sabres attacker is down in production on the power play year over year, and it’s increasingly an area of concern for head coach Ralph Krueger. (Buffalo’s power play last season finished 18th in scoring and 16th in expected goal-scoring; entering Tuesday night's games, it is 23rd in scoring and 29th in expected goal-scoring, which has been nothing short of a disaster.)

The conclusion? I will let Buffalo’s video teams and coaching staff further dissect the problematic power play, but the solution at 5-on-5 is clear. Buffalo needs to abandon any notion that they have the supporting talent to blend Skinner into a middle-six role. The team is hurting, and sacrificing another skilled player for the sake of balancing lines just hasn’t worked.