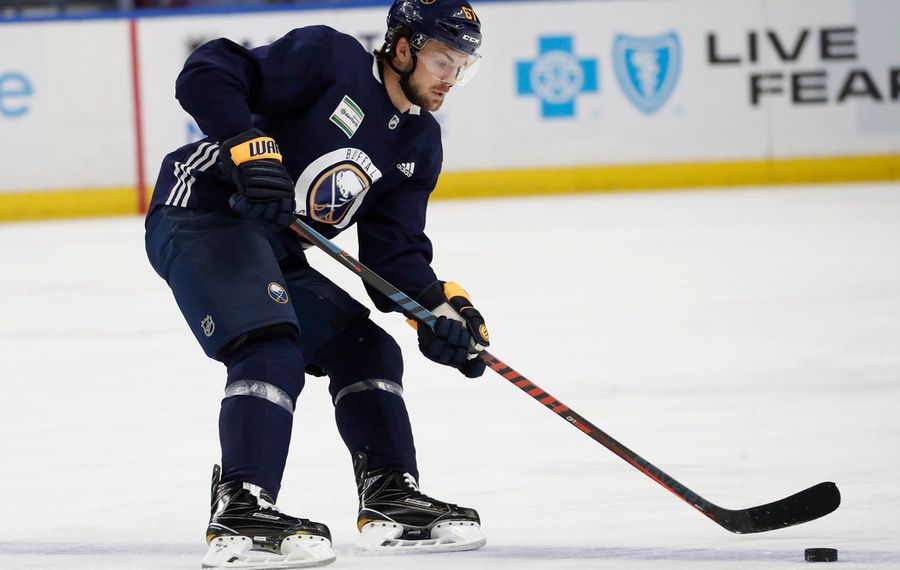 With the seats in KeyBank Center empty and most of his new Buffalo Sabres teammates enjoying a night off, Michael Frolik skated on his new home ice for the first time Tuesday at approximately 8:30 p.m.

The solo skate culminated a chaotic day in which Frolik awoke at 6:30 a.m., visited the U.S. Consulate General in Toronto twice to acquire his work visa and traveled south through rush-hour traffic on Queen Elizabeth Way.

"I'm really excited to be here," Frolik, a native of Czech Republic, beamed following his first Sabres practice Wednesday. The 31-year-old winger smiled and exhaled before recalling the six-day saga that began last Thursday with his trade from the Calgary Flames to Buffalo.

Frolik could not join the team until he received his work visa, a process that typically takes four business days. Now he can embark on what he called a "fresh start," and the Sabres are using every resource to prepare Frolik to make his debut Thursday night in St. Louis against the defending Stanley Cup champion Blues.

“He didn’t get in here until last night, so the important thing when you integrate somebody like that is you want him, like everybody else, to actually just play free and play naturally within the principles," Sabres coach Ralph Krueger said. "So, we have to be patient on him automating those principles and we’re not going to overload him here. He has such a good instinct and you could see his speed already today. His defensive decision-making is strong and we feel he’s going to slide into the way we want to play quickly."

The Sabres' equipment staff prepared Frolik's dressing room stall hours before he arrived in Buffalo. Upon arriving to work Wednesday morning, he and the coaching staff went over the basics of Krueger's offensive, defensive and penalty-kill systems.

Frolik then practiced on a forward line with Conor Sheary and Marcus Johansson, a 29-year-old alternate captain with 624 regular-season games of NHL experience. The thinking was Johansson could be a resource for Frolik as the latter grows accustomed to playing on a new team in a different conference.

The two veterans spoke about the Sabres' on-ice systems throughout practice Wednesday. Additionally, Frolik practiced on the penalty kill, an area in which he's expected to make an immediate contribution. At the time of his trade from Calgary, only one other Flames forward logged more ice time on the penalty kill than Frolik since he joined the team at the start of the 2015-16 season. The Sabres' penalty kill ranked 28th in the league entering Wednesday.

Following practice, Frolik tried on his other equipment, including a white Sabres helmet, and he planned to meet with the coaching staff during the flight to St. Louis. Kruger wanted to show Frolik a few video clips and planned to continue the conversations into Thursday, when the Sabres are expected to hold a morning meeting in Enterprise Center.

"Yeah, just talking about the systems and stuff like that," Johansson said of his conversations with Frolik. "I felt like we had some good chemistry out there already today. I’m not too worried about that. I’m just trying to get him to understand what we’re doing. It’s not too hard, but as a new guy, there’s always a lot of stuff you’re trying to take in."

"In this league there’s really no big changes," Frolik said. "It’s pretty similar. I think we’re going to talk about it a little bit now on the ride on the plane and what the structure is. I think there’s probably nothing I haven’t seen before. It’s pretty standard. ... Hopefully I can jump right into it."

The timing of the trade forced Frolik to cold call a local rink in Calgary to set up ice time over the weekend, and the Sabres assisted him in the extensive process of acquiring a visa. He used his solo skate Tuesday night in KeyBank Center to shake off any remaining rust from not having played in a game since Dec. 31.

This is potentially a crossroads in Frolik's career. He had five goals among 10 points while averaging a career-low 11:56 in 38 games with the Flames this season. A pending unrestricted free agent, Frolik welcomed a trade with the hope he could have a more prominent role in Buffalo. He has played in 831 regular-season games during his 12-year NHL career and won a Stanley Cup with the Chicago Blackhawks in 2012-13.

In addition to his relentless play on the ice, the Sabres want Frolik to inject his leadership and wisdom into the dressing room. Frolik is the second-oldest player on the roster behind goalie Carter Hutton and has 47 games of playoff experience.

“Just watching practice today, he was flying out there and you can see he went for a little skate last night here with nobody around so he could warm up the blades," Krueger said. "But he’s definitely hungry and extremely engaging. He’s everything that the information on him was as far as his off-ice presence and his confidence, and his personality fits into our group really well right off the hop. But we definitely sense a passion for this challenge and a hunger to want to be here.”

The former 10th overall draft pick began his career as an offensive-minded forward and scored 21 goals in each of his first two seasons with the Florida Panthers. However, Frolik evolved into a defensive force upon joining the Blackhawks in 2010. He brought both elements to Winnipeg and Calgary.

At the time of the trade, the Flames' 54.79% 5-on-5 shot differential with Frolik on the ice since his arrival in 2015 was the second-best mark among any of the team's forwards during that span. He also scored 34 goals during his two seasons in Winnipeg from 2013-15.

Frolik wants to prove he can still be the top-six forward he was during most of his time in Calgary, and he'll have that opportunity following his chaotic journey to Buffalo.

"Hopefully we’re going to have a good start here, for me as well, and I feel like this a reset button a little bit for me and a fresh start," Frolik said. "It obviously didn’t work out in Calgary at the end, but I had a great few years there and looking for more here in Buffalo."