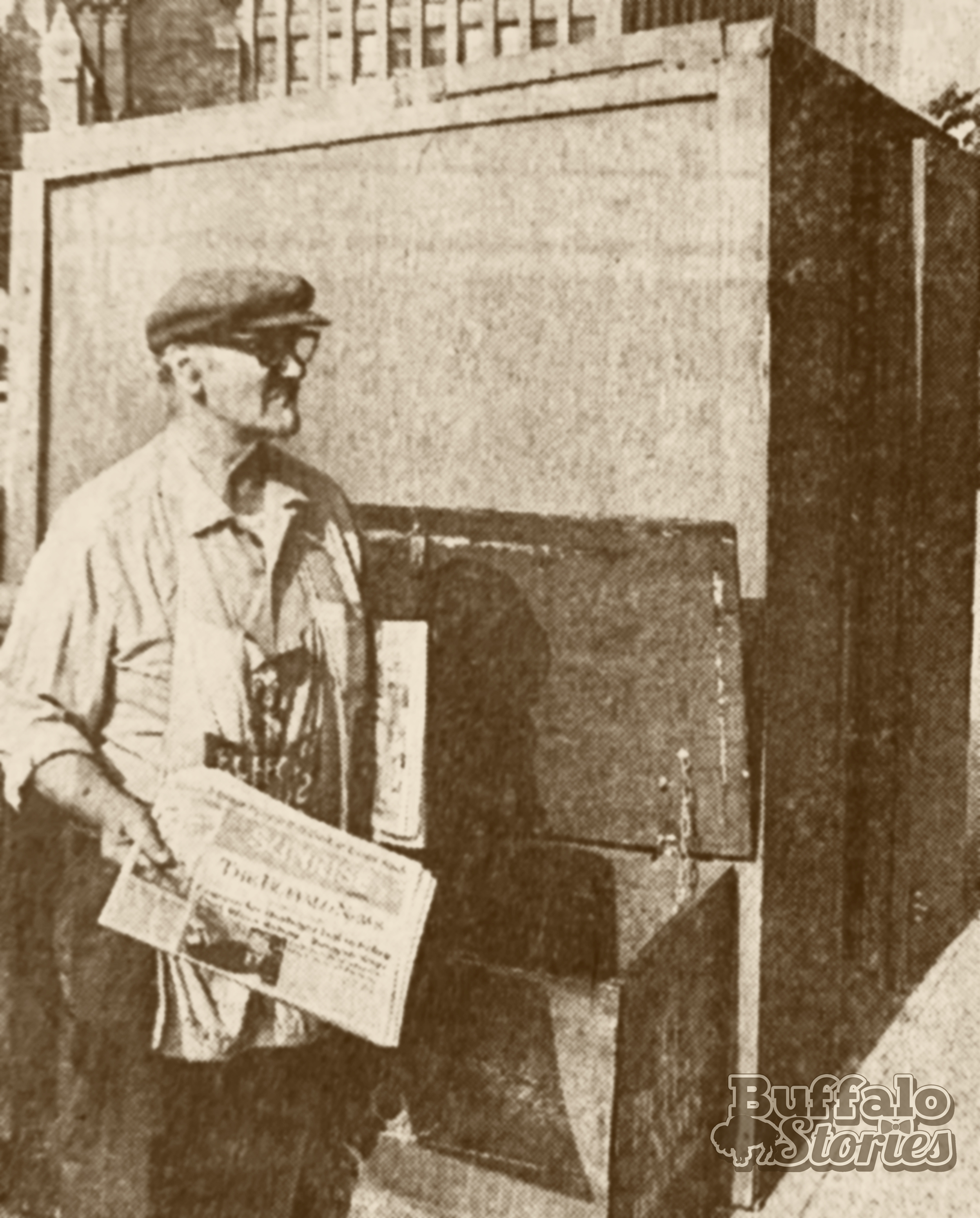 Dominic Battaglia at his newsstand, Main at Court, 1987.

By the time Judge Barbara Howe ordered the newsstand at Hertel and Delaware torn down in 1999, the newsstand business was a holdover from another era.

“With his oversized cap, news apron and half-chewed cigar, Battaglia was a good-natured curmudgeon who was out daily in all kinds of weather to sell newspapers and magazines,” read The News obituary of Dominic Battaglia, who sold papers at Main and Church for 50 years starting in 1929. “He never wore gloves even on the coldest days and often heckled his customers who did.”

In 1987, Battaglia and the Hertel stand were among five stands still operating in the city, down from 52 newsstands during the World War II years, when there were shacks hawking newspapers on almost every corner downtown.

For the most part, Battaglia, Blind Eddie at Broadway and Fillmore and other newsstand operators had been a part of the fabric of the corners they worked for generations.

That wasn’t the case at Hertel and Delaware. The newsstand sprang up in 1979, and after some notoriety and bad press in the mid-1990s, it was uncovered that the stand never paid rent to be on a city right-of-way and had been operating for 15 years using city electricity.

The Four Corners newsstand first shut down in February 1995, after a News investigation by reporters Dan Herbeck and Dave Condren found pornography being sold at the newsstand which was owned in part by the Rev. Edwin Kaukus.

The Rev. Kaukus, who had been pastor of St. Stephen’s Catholic Church on Elk Street, was removed from ministry and no longer allowed to publicly function as a priest following a wide-reaching diocesan investigation.

The story drew attention to the tiny building, which Delaware District Common Council Member Alfred Coppola uncovered was being occupied, on a city sidewalk, rent-free.

“It’s wild,” Coppola said, in trying to get to the bottom of how the structure was built in the first place. Even for the owners to begin to pay rent, the city charter says the spot would have to go up for bid.

With no legal standing, the owners were ordered to vacate in November 1995.

After four years of lawsuits, the structure was eventually declared a safety hazard and “an unlawful encroachment on city property.”