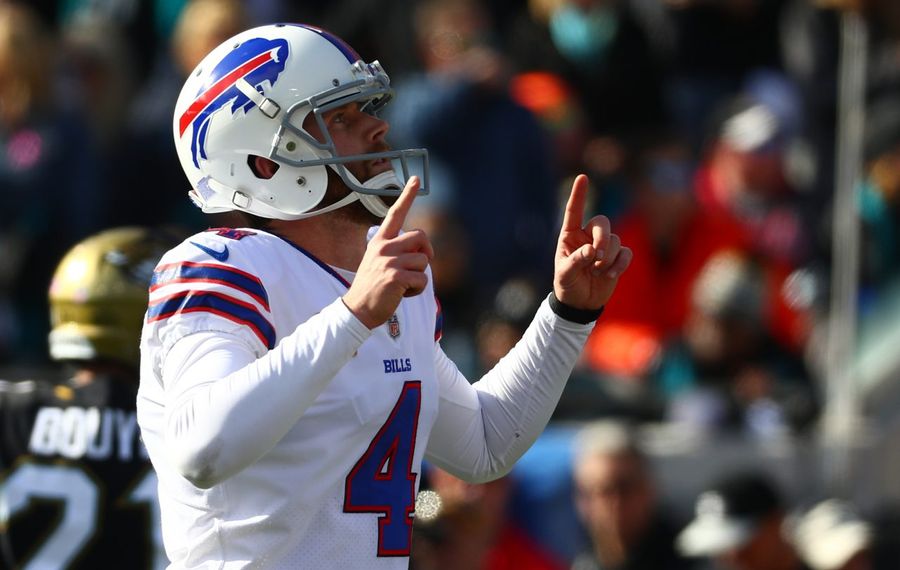 A 47-yard field goal on the final play of regulation does not conjure up good vibes for Buffalo Bills fans.

Neither bad karma nor intense pressure bothered Stephen Hauschka when he lined up for the game-tying kick in the wild-card playoff game Saturday in Houston.

Hauschka’s field goal would be a long-cherished moment for fans had the Bills won the game in overtime. Nevertheless, it was a big deal, even in defeat.

“I wasn't thinking about that, I'll tell you that,” Hauschka said Monday, in reference to Scott Norwood’s 47-yard miss in Super Bowl XXV. “I was in the moment there. It's an interesting situation because deep down you know how important it is. But at the same time, it's the same task I do every single day in practice, every single day, every game, kick. It's really the same task. The challenge is can I do the same task with all the pressure? That's why I work at it so hard. I was pumped up. I was excited.”

The kick capped a strong finish to Hauschka’s 12th NFL season and his third with the Bills.

The 34-year-old was 4 for 4 in the 22-19 playoff loss to the Texans. Hauschka made 13 straight field-goal tries to end the season and 18 of his last 19 attempts over the final eight games.

“I felt like I kept us in the game,” Hauschka said of his final kick. “I was hoping I was going to get that chance to win the game at the end.”

Then he had some glitches early this year. He missed an extra point and a 53-yarder on a windy day in a loss to the Eagles. He missed 34- and 53-yard tries in the 19-16 loss at Cleveland. The Bills even put in a waiver claim in early December on kicker Chase McLaughlin, who was awarded to the Colts. By all accounts, the Bills planned to keep Hauschka even if they got McLaughlin.

“That's life; everybody's life has ups and downs,” Hauschka said. “How are you going to respond to it moving forward? That's what it's all about. I'd argue your success in the future is about how you respond to the tough moments in your life.”

After missing an extra point in Dallas, Hauschka expressed confidence in an interview with The Buffalo News. He said corrections simply were a matter of working details of his kicking stroke, such as making sure his plant foot was pointed in the right direction, making sure his drive step was open and getting into the proper rhythm.

It came together for him. He was back to his “Hausch Money” ways for the playoffs.

“There's a lot of growth for me this season, a lot of learning,” Hauschka said Monday. “It wasn't always easy. It wasn't what I wanted at specific moments of the season. I grew from it. I'm a better kicker because of it, and I know coming back next season, I'm going to be even better from all of that because I know exactly what I need to do moving forward.”

Like his teammates, he was still a little stunned by the sudden end to the season.

"This one is going to take a little while to unpack and process,” he said. “It's an emotional game. Everybody put everything out there that they could. We didn't get the job done and it makes us hurt. We'll heal and recover from this and this will motivate us in the offseason to train even harder, to come back even more focused. I think it shows the importance of having home-field advantage in the playoffs, too. This team, this franchise dreams of having a home-field playoff game because I know we can get it done. We can get it done on the road, too, but I think that should be the goal for this team.”

Hauschka signed a two-year contract extension worth $8 million in August. The Houston game was the 16th playoff game of his career. With his 13 points scored against the Texans, he’s now one of 13 players in history with 100 playoff points or more. He has 24 postseason field goals, which is seventh most all time.

He’s bullish on the team’s future.

“We have great leadership with coach [Sean] McDermott, a great front office, great quarterback,” he said. “At some really key places in this building, there's some great leaders. We've got an amazing defensive leader who's what, 21, 22? There's a lot of good people to build this franchise around, and I'm excited to watch where this team goes.”