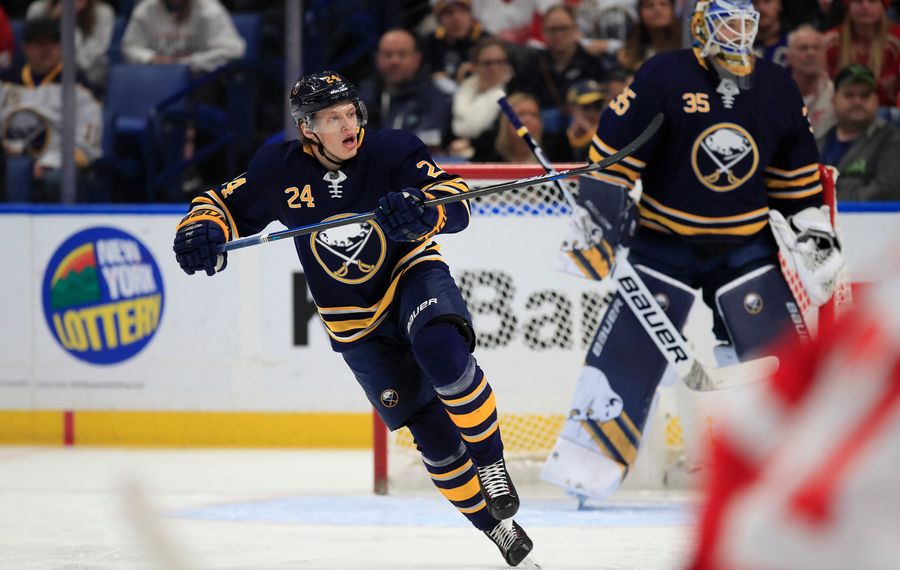 Lawrence Pilut got to make the trip with the Buffalo Sabres to Sweden in November and was there simply as insurance. Marco Scandella was hurt and the Sabres needed to have an extra defenseman.

Pilut didn't dress for either loss in his home country against the Tampa Bay Lightning but it was an important trip for him. After offseason shoulder surgery kept Pilut out of training camp, the Sweden trip was new coach Ralph Krueger's first chance to see Pilut on the ice.

Pilut made the right impression on Krueger. With Jake McCabe sidelined due to an upper-body injury, Pilut got the call from Rochester on Tuesday and his NHL debut for this season could come Thursday night, when the the Sabres play the defending champion St. Louis Blues in Enterprise Center.

"It was really good that he was with us for that length of time, especially after all the things I heard about his ability," Krueger said Tuesday when asked about the week in Sweden. "You can even see today in practice he's got that footspeed, the hunger to close gaps and play aggressively all over the ice while adding a really good first pass. He adds nicely to the offense.

"The Sweden trip gave us that opportunity to spend all that time with him and for him also to feel comfortable in this environment and with this group. So let's see how the next step goes."

Pilut, 24, is having an All-Star season in Rochester. He ranks third on the Amerks and is tied for 12th in scoring among AHL blueliners with 21 points in 29 games (five goals, 16 assists). He has 16 points over his last 21 games, including a season-high four-game point streak.

How happy was Pilut to be at KeyBank Center on Tuesday morning? He was the first player on the ice and he was still smiling in the dressing room when it was over an hour later.

"I think I had a pretty slow start to the season, but otherwise I think I’ve been getting into my game and getting into a groove more and more," Pilut said. "Lately I’ve been playing a pretty good game. ... I’m happy to be named to the all-star game. I couldn’t do it without the guys down there and everything around the organization, very professional and all the guys around have been pushing me."

Krueger said he was impressed with Pilut during their conversations in training camp, when the defenseman was limited to off-ice work. And his curiosity was piqued during the summer by constant inquiries about Pilut's status.

"Pretty well everybody I knew that managed any team in Europe was checking whether he was available to play over there. That was positive," Krueger said. "He left quite a mark last year. People were checking if he was part of the plans or is he available to be an import in Europe. I just kept telling everybody, 'No, he's not available to be an import in Europe as far as I know.' We're pleased to have him in the organization and we're excited for what he can potentially bring us over time."

Pilut gives the Sabres another option as a puck-carrying defenseman, either by moving the puck himself or with a strong pass out of the defensive zone. And he can certainly chip in on the second power-play unit as well.

Pilut had one goal, five assists and a minus-8 rating in 33 games for Buffalo last year, averaging 17:25 per game and compiling a strong 53.3 Corsi rating at even strength. That was the best on the team among skaters who played in at least 30 games.

The buzz in the organization is that the 5-foot-11-inch, 194-pound Pilut has taken bigger steps in his game this year in Rochester.

"He makes passes that some guys would have to use the boards or the glass a lot. He doesn’t panic under pressure and he’s doing a lot better defensively," Amerks coach Chris Taylor told reporters last week in Rochester. "His game’s growing, he’s learning how to use his body compared to a guy that weighs 230 pounds. With the height on him, he’s understanding how to maintain his stance and box out guys as much as possible. He’s really good at using his stick, so he doesn’t need to use his body as much."

"I've just been working on that consistency, trying to play at a high level all the time and just try to focus on my D-zone play all the time," Pilut said. "I think that’s been a big part of me so far. I think I can just keep going on that and keep developing."

Pilut knows he'll face a supreme test Thursday against a St. Louis team that has seven straight wins at home over Buffalo and has not lost to the Sabres in the Arch City since Dec. 27, 2009.

"It would be really exciting. I feel like I’ll be ready when the opportunity’s there," he said. "When it comes, I’ll go out and just be me out there. Make sure you come out with a lot of energy. Just keep that mind fresh all the time, that’s a big thing. I think that’s what I worked on a lot. I think I’m ready for that."

With Bills season over, here's a crash course on the Sabres