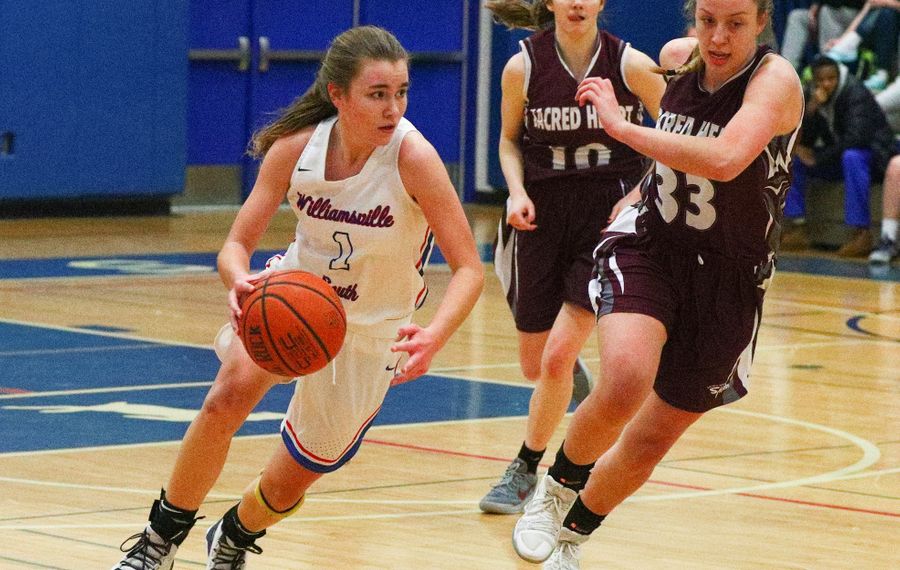 It’s no secret that the Section VI girls’ basketball tournament isn’t for the faint in heart, but once the postseason starts, keep an eye on the Class A-2 bracket.

Five of the area’s top-ranked teams in the Buffalo News poll reside in that classification, including two of the top three in second-ranked Williamsville South and No. 3 Amherst. Each received at least one first-place vote in this week’s poll and each is ranked in the top seven in the latest New York State Sportswriters’ Class A poll.

The longtime Main Street rivals separated by about 2 miles renewed pleasantries Tuesday night at South and gave the standing-room crowd a potential preview of things to come.

DeBerry finished with 18 points and 12 rebounds before fouling out. She poured in eight points during a third quarter in which the Billies (4-1) built on a 26-23 halftime lead against their fellow ECIC II foe. Hannah Dolan scored 17 of her team-high 20 points during the second half, hitting two 3-pointers in the third quarter.

Sarah Foster grabbed 12 boards as South bounced back from Sunday night’s 53-41 loss to News No. 1 Cardinal O’Hara – a clash in which the Billies started slow, fought their way back to tie only to watch the reigning Monsignor Martin champion Hawks pull away during the final 4:30 with a 14-2 run.

Though South started out a tad slow again Tuesday, it crafted a different ending because it played a little tougher and its defense came up huge. Coach Kristen Dolan switched from man to zone during the decisive stretch in the third quarter to create the opening for the bounce-back triumph.

The win Tuesday can be considered a confidence builder, even for the state’s third-ranked team in Williamsville South.

“I’m just happy with bouncing back from two nights ago,” Dolan said. “Just feeding off that confidence now, to know we got this. … To do it against Amherst, which is so well-rounded, they can all handle the ball and they pressure the ball … I’m happy with how we did and responded from the other night.”

Aside from a second-half cold spell by the Tigers (4-3), which received a game-high 23 points from Binghamton commit Ella Wanzer, they showed why they’re ranked seventh in the state. They played aggressive defense, had South flustered at times with their quickness, and showed no fear against a Billies program that has won its respective sectional tournament bracket each year since 2014.

Throw in the fact the players on both teams grew up playing on the same youth travel team, and the intensity was dialed up a notch. But South rose to the occasion with DeBerry and Hannah Dolan taking turns making key plays during the third quarter. The Dolan sisters, Hannah and Gretchen, hit back-to-back 3-pointers to give South a 32-25 lead. A traditional three-point play by DeBerry made it 35-27 with another 3-pointer from Hannah Dolan making it 39-27 just past the mid point of the quarter.

“That was big,” Kristen Dolan said. “We were so flat against Cardinal O’Hara and so many girls just didn’t come to play that night. We talked about how we need everybody being a threat because they’re capable of that.”

While Amherst coach Mike Chatelle considers Will South, which defeated defending state champion Pittsford Mendon last month, as the team to beat in the section, the Billies aren’t the only team with a chance. Most of them happen to be in Class A-2.

Defending Class A champion Lake Shore may be figuring out things playing without the talented Cornfield sisters, who helped the Eagles reach the state quarterfinals last year. But they’ve historically been a tough out in A-2. The Eagles (3-2) boast a win over Class AA favorite Orchard Park.

Grand Island of the Niagara Frontier League has Lydia Sweeney, who is committed to attend Division II power Cedarville (Ohio), leading the charge for a Vikings crew that has won six in a row since an 0-2 start. The streak includes a win over defending Class AA champion Frontier.

Lewiston-Porter, also of the NFL, is unbeaten and should it run the league table, likely would be the top seed in the bracket, thereby having the easiest road to the championship game March 8 at Buffalo State Sports Arena.

“I would say it’s unusual,” Chatelle said of A-2’s depth. “We’re going to have some strong second-round games.”

That means in-season showdowns like Tuesday’s between Amherst and South and other games featuring contenders figure to especially meaningful because the slightest misstep could be the difference in playing at home or on the road against a tough playoff foe.

Still, some believe Tuesday’s clash featured the two teams with the best chance of winning A-2 and then the overall Class A title against whoever wins the Class A-1 bracket.