Thinking of using the Albright-Knox Art Gallery's stately stairs and columns as the backdrop for wedding photographs?

A chain-link fence now encloses the rear stairs that adorn the 1905 E.B. Green-designed building on Lincoln Parkway, across from Hoyt Lake. The city's most popular location for wedding group photos will be off-limits during construction of the museum's $165 million expansion. The project isn't expected to be completed until mid-2022.

"The back steps of the Albright-Knox are the standard location for wedding group photos," said Stefan Ludwig, a wedding photographer.

Museum officials are well aware of the site's popularity for wedding parties, and prom photos, too.

"In June and July, you have limousines queued up to take pictures," said Andrew Mayers, the museum's communications coordinator.

Wellness and yoga classes also use the stairs' expansive platforms.

Losing the Albright-Knox backdrop will be a challenge, said Nicole Gatto, a Buffalo wedding photographer.

"We use it around 75% of the time for photos," Gatto said. "No other place has that nice, clean, crisp look." 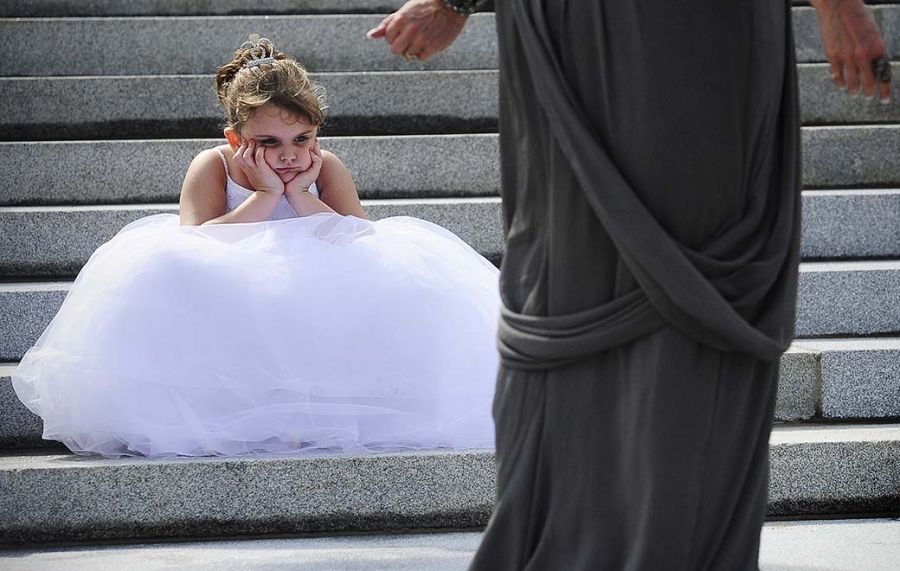 Pamela Curtess, 5, of West Seneca, waits on the back steps of the Albright-Knox Art Gallery while her cousin has wedding photos taken in 2012. (News file photo)

Gatto said her clients frequently ask that their photos be taken there.

The museum's proximity to Delaware Park also adds to its popularity, she said.

Gatto said she uses the park's Rose Garden for photos, but it doesn't have the same effect as the stately backdrop.

"The Rose Garden is beautiful, but it's a smaller and tighter area," Gatto said.

Buffalo City Hall and the Buffalo History Museum are also used by wedding photographers for group photographs and are likely to grow in popularity the next two years with the Albright-Knox out of circulation, Ludwig said. The history museum, he said, has the added benefit of the nearby picturesque Japanese Garden.

The steps down to Hoyt Lake are an option for a more casual shot, he said.