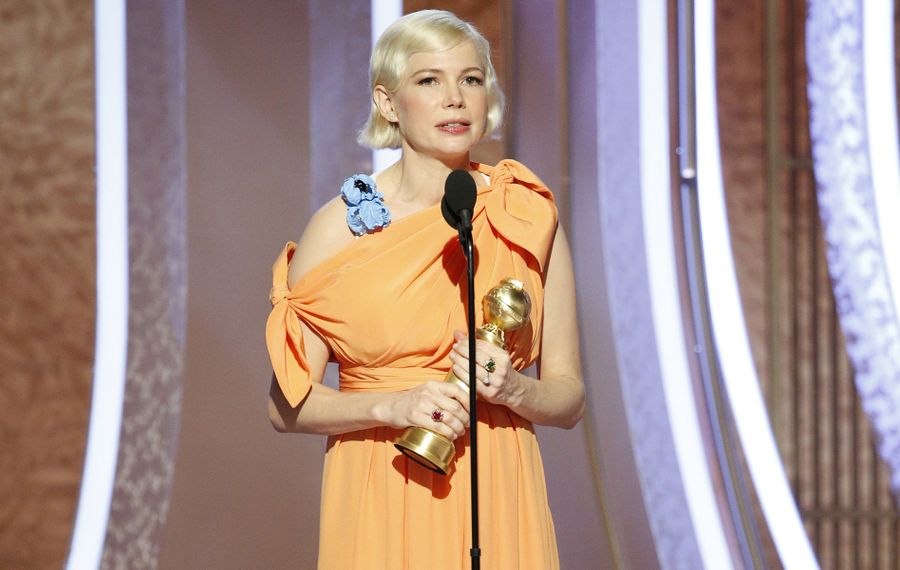 All the usual suspects were there – Marty, Meryl, Brad, Quentin. You know, the whole gang.

As far as I'm concerned, the Golden Globes on Sunday night turned into the Michelle Williams Show before it was over. The actress some of us have been watching since she played a lost and promiscuous teen on "Dawson's Creek" won a well-deserved award for playing legendary Broadway actress and dancer Gwen Verdon on FX's dual biopic about Verdon and her onetime husband, director and dancer/choreographer Bob Fosse.

Williams proceeded to demonstrate for all time the fine art of making a political acceptance speech at a TV award show. By the time she was finished, every woman in the Beverly Hilton Ballroom seemed ready to storm the nearest voting booth and vote as often as she could get away with.

Such was its eloquence and so strong was her delivery that it is worth quoting in full. As she stood there holding her heavy new award, Williams said this, less than 12 hours before the trial of Harvey Weinstein was scheduled to begin across the country in New York:

"When you put this in someone's hands, you're acknowledging the choices they make as an actor, moment by moment, scene by scene, day by day. But you're also acknowledging the choices they make as a person – the education they pursued, the training they sought, the hours they put in. I'm grateful for the acknowledgement of the choices I've made and I'm also grateful to have lived at a moment in our society where choice exists. Because, as women and as girls, things can happen to our bodies that are not our choice.

"I have tried my very best to live a life of my own making and not just a series of events that happened to be me but one that I could stand back and look at and recognize my handwriting all over – sometimes messy and scrawling, sometimes careful and precise, but one that I had carved with my own hand and I wouldn't have been able to do this without employing a woman's right to choose.

"To choose when to have my own children and with whom. When I felt supported and able to balance our lives knowing as all mothers know our scales must and will tip toward our children. Now I know my choices might look different from yours but thank God – or whomever you pray to – that we live in a country founded on the principle that I am free to live by my fate. And you are free to live by yours.

"So women – 18 to 118 – when it is time to vote, please do so in your own self-interest. It's what men have been doing for years, which is why the world looks so much like them. But don't forget we are the largest voting bloc in this country. Let's make it look more like us."

Sorry, Hollywood foreign press. At that moment the whole star-infested shebang, snarling host Ricky Gervais and all, had turned into the Michelle Williams Show. And a fine episode of it we saw.

For one thing, she had gracefully deflected Gervais' admittedly pointed and even savage version of the ancient complaint about spoiled and phony actors getting so far above themselves that they tell the rest of us how to live and vote and God knows what.

This has often been an ancient bit of polemic drool that has, in the past, been particularly absurd when propounded about people who have performed Shakespeare, Shaw and Arthur Miller by those who'd not only vote gladly for Godzilla, but invite him over for a Sunday pancake and bacon brunch.

Gervais' blast earlier in the show was much more clever. It's just that for all his acidic panache, Williams revealed he hadn't really thought it all the way through or even close. He was grandstanding on the ancient presumption that all actors are idiots and unprincipled idiots at that.

What he said in his opening monologue was this: "Apple roared into the TV game with 'The Morning Show,' a superb drama about the importance of dignity and doing the right thing made by the company that runs sweatshops in China. You may say you're woke, but the companies you work for are unbelievable – Apple, Amazon, Disney.

"If ISIS started a streaming service, you'd call your agent, wouldn't you?" he asked the audience. "So if you win an award tonight, don't use it as a platform to make a political speech. You're in no position to lecture the public about anything. You know nothing about the real world."

Try telling that to Williams – or, for that matter, any other American woman on the night before Weinstein went on trial for the depredations that began the #MeToo movement in chief. Gervais may not grasp those quite yet, but then many men didn't at first. Toxicity isn't easy to taste if your morning orange juice tastes just fine. It's all too easy to ignore. What it's doing to someone else's meal might happily seem to be their problem.

The fact is Gervais was partly right. A lot of actors would indeed be happy to get a paycheck from an ISIS streaming service, but a lot wouldn't, too.

Beyond that, it's also true a life lived in total, sterile uncontaminated political purity might not be worth living. If every loaf of bread consumed and every TV show made and watched had to be vetted for proper political pedigree, the life we'd all be living would resemble one big infirmary waiting room.

That's as far as can be from what the Golden Globes are and no one knows that more than Gervais, despite his antiseptic pose. As we all know, the Golden Globes are an absurdly overblown contrivance for promoting and selling the bejabbers out of future movies and TV shows. That's why the foreign correspondents in Hollywood are so happy to vote for British films like "1917" for best picture and not "The Irishman," which speaks directly to so many Americans and even thrills us sometimes. (In its quiet, un-histrionic way.)

Same with Brit TV like the sitcom "Fleabag." As great as so many British products are, the comfort level of the Hollywood foreign press always rises when Brits get awards. (They are awfully good at accepting them. You have to love Elton John telling us that his Golden Globe with his career partner Bernie Taupin was the first award they'd ever won together.)

I must admit being startled by how truly transgressive some of Gervais' jokes were. He confided to us all he'd heard they were making a sequel to "Sophie's Choice." In that one, "Meryl is going, 'Well, it's got to be this one then.' " (Lenny Bruce would have loved that one. He, after all, used to defend classic American "thrill killers" Leopold and Loeb by saying of their victim, "I think Bobby Franks was snotty.")

The one that really got the crowd going, though, was a joke about the current movie "Cats." According to Gervais, the film features Dame Judi Dench, in Cat mufti, grooming herself in a catlike manner.

The Hollywood foreign press opts for foreign winners whenever possible. Home is where their heart is – even if it's someone else's in the relatively small organization. When they don't do that, they opt for telegenics or tourism that all can share – Brad Pitt or hyperarticulate Quentin Tarantino. "Once Upon a Time in Hollywood" was made for the Golden Globes.

Nothing as bedrock American as "The Irishman" stood a chance. Joaquin Phoenix got a pass for best actor in "Joker" because he was by any assay sensational in the film. It didn't hurt, though, that he's always been a kind of resident alien in bourgeois America. He's from a '60s countercultural suburb. And, as L. P. Hartley immortally said, "The past is another country. They do things differently there."

It's always been my more sympathetic opinion that Phoenix's wholly alienated brilliance is due, in part, to him being the one to call 911 to try hopelessly to save his brother River Phoenix when he fatally overdosed on the sidewalk in front of Johnny Depp's the Viper Room. Joaquin will always be, in some ways, somewhere else. The Hollywood Foreign Press Association, doubtless, will always know that.

I very much liked the special awards to Ellen DeGeneres and Tom Hanks, even if only one of them was named after a Hollywoodian sympathetic in 21st century America (Carol Burnett – naming an award for Cecil B. DeMille in our era is a little like grinningly giving out an award named after John C. Calhoun).

Both award recipients made the audience feel loving and comfortable.

So that Michelle Williams could stir their blood and bile just a few minutes down the road.