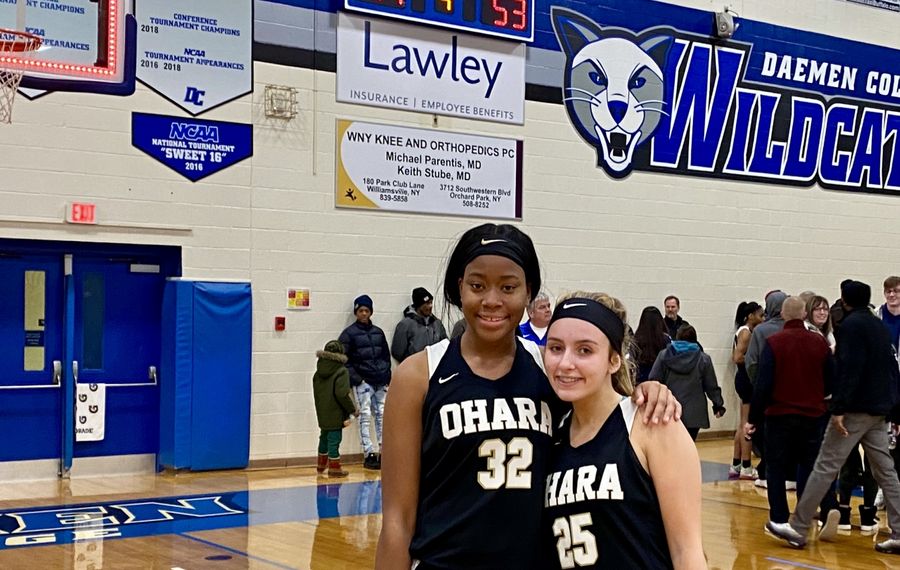 Shooting down one of the state’s top-ranked contenders, Cardinal O’Hara staked an early claim to maintaining its status as the No. 1 girls basketball team in Western New York.

The Hawks swarmed Williamsville South and its star center Amari DeBerry on Sunday night, winning 53-41 in a marquee matchup between local titans that drew a crowd of more than 250 to Daemen College.

“This was a really big game,” said Mia McCarthy, a junior guard who led O’Hara with 19 points and four steals. “If we can beat them, we can beat anyone.”

The Billies (3-1) entered the contest unbeaten and ranked No. 1 in the state in Class A. O’Hara (7-2) is 10th in the AA rankings and has finished four of the past six seasons atop the Western New York large school poll.

“We want to be the best team locally before we move on and try to be the best somewhere else,” O’Hara coach Nick O’Neil said. “Williamsville South is a team that might make it down to states this year, with a great coach and great players. We like the competition. We feel like it will make us better for the Catholic league playoffs.”

“They’ve got an unbelievable group year in and year out,” Billies coach Kristin Dolan said. “We love playing Cardinal O’Hara. Nick and I feel it’s a great matchup in an awesome environment, and it’s really good for girls basketball. I just wish we had a better performance.”

South will get a second chance at O’Hara on Feb. 21. Sunday’s matchup was a late addition to the schedule after a common opponent canceled games against both teams.

They split a home-and-home series last season, with DeBerry dominating the paint during South’s win at O’Hara in the second matchup. This time, the Hawks used a zone defense to stifle the 6-foot-5 junior who has committed to UConn, holding DeBerry to five points.

“We worked hard to not let her get the ball,” Strong said. “Total denial. Try not to let her touch it at all.”

When DeBerry was able to catch the ball in the high post, she was consistently double-teamed and forced to pass off to teammates who missed a number of layups, particularly during the Billies’ nearly six-minute scoring drought to open the game.

“We don’t have anybody as big as Amari,” O’Neil said. “But we are one of the schools that can match up with size along our back line. Wherever she goes to post up, we have somebody with size and length there to get a hand up and make things difficult.”

O’Hara is transitioning to a different style after utilizing pressure defense and guard play to great success in recent seasons.

“We had to change our strategy because we don’t have the kids to press,” O’Neill said. “We have some that can press up, but with a short bench, we are trying to stay out of foul trouble. And we are a little more frontcourt-oriented. We will be playing a lot of zone this year. And it’s going to be hard to score against our zone because of the length we have on the back line.”

South came back from a 10-point deficit to tie the score at 39 midway through the fourth quarter. McCarthy took over for O’Hara in the closing minutes, sinking two of her four 3-pointers and making two crucial steals in the closing stretch.

McCarthy’s perimeter shooting has complemented the Hawks interior strength. She scored 21 points in a win last month against Elmira, the No. 13 team in the state AA rankings.

“Her confidence has been soaring the past couple of weeks,” O’Neil said. “And when she plays like that, we are tough to beat.”

“We knew it was going to be a battle tonight and we just weren’t tough enough,” Dolan said. “They are a great team and it’s exactly what we needed.”

Another tough test faces South on Tuesday night when it opens ECIC II play on the road against Amherst, the No. 7 team in state A rankings and another contender for the top spot in Western New York.

O’Hara returns to Monsignor Martin play at home Thursday against St. Mary’s, another top five local opponent who is ranked 15th in the state in AA. The Hawks will play at Amherst on Feb. 11.

“Those teams, along with Sacred Heart who is really good, those are the big five in the area,” O’Neil said. “And we’re going to play them all here coming up. So we’ll see where we are at.”