The ongoing disaster in Australia has not yet approached the record mortality rate of some fire seasons past. By any other measure, however, this season has been the worst in recorded history. It is only early January, and there is much of the Australian summer yet to come, with no lasting relief on the horizon.

The acreage alone involved in these hundreds of fires is staggering:

Several government agencies and wildlife groups have estimated that 400,000-500,000 Australian animals have already died in these fires as of late last week. This footage of desperate koalas and kangaroos is heart-wrenching.

And then there is the blinding, toxic smoke, which is a major public health hazard, with serious pollution spreading all the way to New Zealand:

The fingerprints of a warming climate are clear on this extreme weather tragedy, but climate change does not stand alone as the cause. There is another phenomenon at play involving an important atmospheric-sea surface interaction in the Indian Ocean. While most Americans have not heard of this oscillation (I had to do some research to refresh my own familiarity), the Indian Ocean Dipole (IOD) is something akin to the Pacific Ocean’s El Niño Southern Oscillation (ENSO).

The IOD can have profound effects on weather and shorter-term climate patterns from East Africa to Indonesia to Australia. It is currently in a positive phase, which, by itself, increases probabilities for drought in much of Australia, especially the southwest, south and southeast portions of the island continent. In this video, the Australian Bureau of Meteorology/BOM explains the IOD in clear and understandable terms.

The IOD has been in a positive phase for several months and is expected to remain positive until mid-autumn. It peaked in an unusually strong stage in early October, and its feedback will carry on for months.

This year, the warming climate may be leaving even more fingerprints. Here we have the largest, most devastating wildfires ever observed, along with incredible heat and the inevitable drought. But something is missing with this extreme IOD: There is no El Niño. ENSO is in a neutral phase, so it has played no role in pumping up the amplitude of this extreme IOD, as has been the case in many past episodes. As stated by the US Climate Prediction Center this past week: “Recent values of the upper-ocean heat anomalies (near average) and thermocline slope index (near average) reflect ENSO-neutral.”

Without that warm El Niño forcing mechanism providing an additional boost to the IOD’s warming and drying, the extraordinarily amplitude and feedback of this year’s positive IOD is more difficult to explain without factoring in climate change. 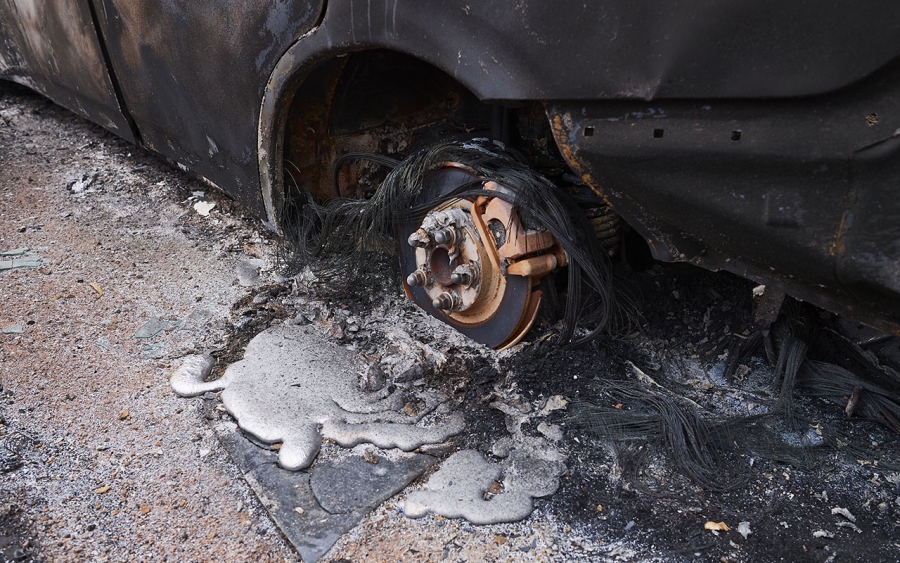 The melted rim of a car after fire passed through the property it was parked on Jan. 6 in Wingello, Australia. (Brett Hemmings/Getty Images)

Summer wildfires are common in Australia, and are often quite severe. In recent decades, however, extreme heat events have multiplied dramatically, and droughts have become more intense and longer-lasting as well. In its 2018 Climate Report, the Bureau of Meteorology stated the number of “very high fire danger days” per warm season has increased substantially and streamflow has decreased across southern Australia. (Other symptoms of the warming climate not related to the wildfires are present as well, including significant increases in regional sea level with oceans warming more than 1 degree Celsius since 1910, along with increased flooding events in the tropical north many years.)

The trends in air and sea surface temperatures around Australia are as well defined as they are around so much of the globe.

The Australian Bureau of Meteorology reports that 2019 was the hottest and driest year for the nation on record, following 2018 as the third-hottest year on record. Even in December, searing heat waves struck not only desert regions such as the Outback, but also Australia’s population centers in the south and southeast. On Dec. 18, the average national temperature — all reporting stations combined — was an astounding 105.6 degrees F.

The IOD climate driver is now past its peak strength and is slowly weakening. This will eventually allow improvement to set up in some regions, especially along the southern and southeastern coasts, with shower chances possibly coming up a bit. The Bureau of Meteorology has no clear tendency for precipitation from January through March across most of the nation. However, streamflow is expected to remain abnormally low because the parched soil will absorb most of what little rain falls, rather than allow needed runoff.

As for temperatures, dry soil heats up more quickly and readily than moist soil. So, even with the IOD gradually weakening, the drought strongly favors above-average heat during the remainder of the summer, as seen in the BOM temperature outlook.

Climate change in the northern hemisphere often receives more attention because there is more landmass and more population, and the arctic is warming at twice the rate as the rest of the globe. The tragedy in Australia is a reminder that even with more ocean and less land, the mean warming climate effects the southern hemisphere as well. Warming oceans are also accelerating Antarctic peripheral ice loss, leading to more glacial outflow and loss of ice shelf mass as well, causing more sea level rise.

At this stage, natural variation in the form of the IOD plays a major role in the current extreme weather, but the warming climate signal remains very strong and is growing.