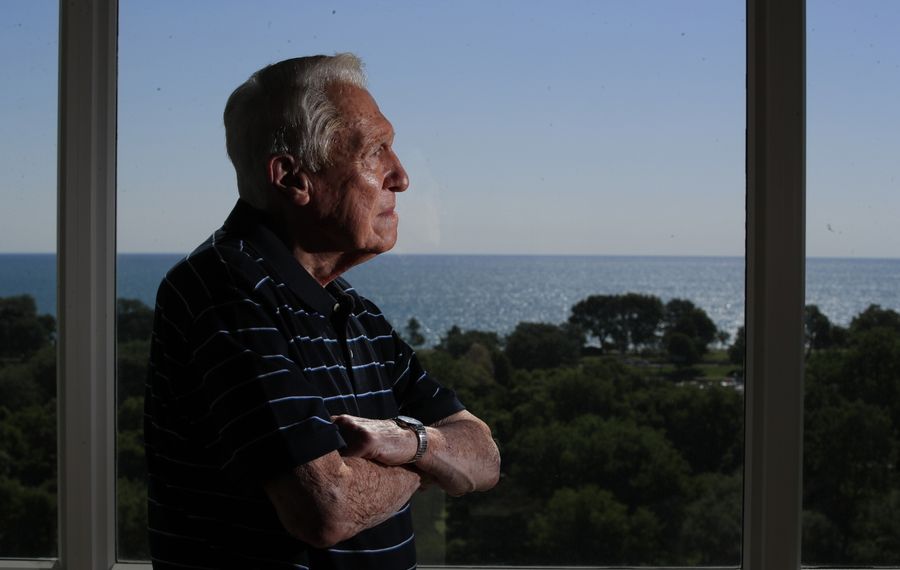 History has long been a coaching tool for Marv Levy.

He quoted Winston Churchill to his Buffalo Bills teams of the '80s and '90s.

One time, to imprint in his players the importance of winning away games, he told an intense story about the defeat of Adolph Hitler’s evil military machine: The Nazis took most of Western Europe and Poland and invaded Russia, but had difficulty withstanding a long winter and later failed to take England.

“Do you know why Hitler lost the war?” Levy asked, his voice fiery.

“Because he couldn’t win on the road,” Levy yelled.

“The place erupted,” recalled Bill Polian, who was then the Bills’ general manager. “He waited for the laughter to end and said, ‘If you want to be a champion, you’ve got to win on the road.’ ”

It worked: The next day, the Bills beat the Chiefs in Kansas City, snapping a long road-game losing streak.

At age 93, there's nowhere else Marv Levy would rather be

Levy, who is 94 and hasn’t coached in two decades, is hoping the lessons he offers from history will still leave an impression in the National Football League. With a small assist from his friend Polian, Levy is campaigning for the NFL and each of its teams to honor the 75th anniversary of World War II. NFL clubs already recognize military service, as Levy acknowledged in an editorial column he wrote for Fox News, but he encouraged them “to do a bit more this year: honoring and preserving the memory of World War II and helping to create the next Greatest Generation.”

‘I wanted to serve’

Levy comes at this from a place that is urgent and personal: He is a veteran of the war. He enlisted in the military one day after graduating from Chicago’s South Shore High School in 1943. Twenty-one of his classmates did the same.

Levy, who joined the Army Air Forces (then called the Air Corps), was set to be deployed to the Pacific, but the war ended and he never saw combat. “I had enlisted, I wanted to serve,” Levy recalled by phone in late December from his home in Chicago. “It was time to go overseas, I was ready to do it. But like everybody else, we were jubilant when the war ended.”

But that jubilation was measured. Several of Levy’s classmates did go to combat, and three of them died. Levy, who went on to receive his master’s degree from Harvard and built a coaching career that culminated in his induction into the Pro Football Hall of Fame, always held their memory close. He wrote a poem about one of them, a track star named Bobby Marek, that he read three years ago during a V-J Day ceremony at the World War II Memorial in Washington, D.C. At that same event he read a poem he wrote called “I’ll Remember Those Days,” which captures the feeling at the end of the war: “I'll remember that time when we went off to war,” Levy wrote, “and then came home to a world that was better than before.”

He remembers – but he wants those memories to live long beyond his years. That’s why Levy is trying to enlist the NFL’s help. 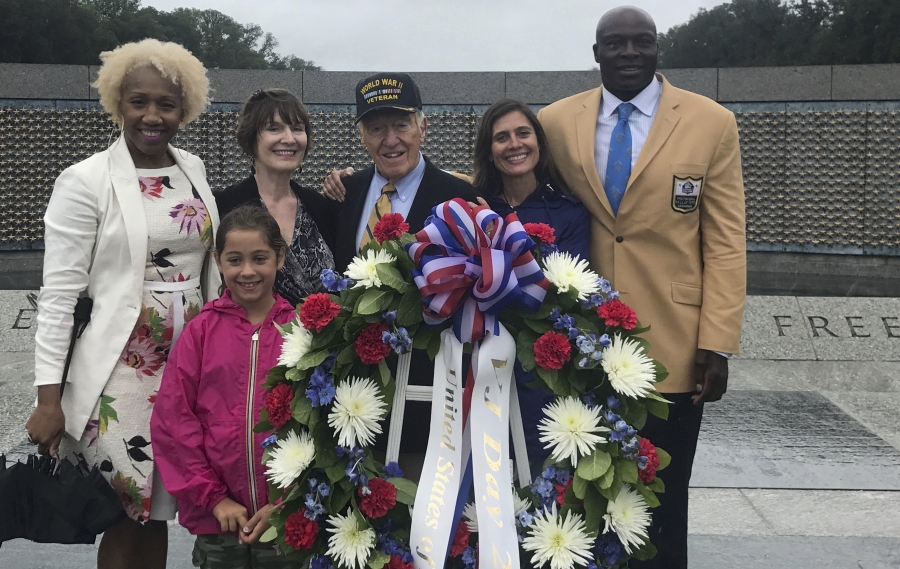 Marv Levy was a featured speaker on Sept. 2, 2017, at the National World War II Memorial ceremony commemorating the 72nd anniversary of V-J Day, which effectively ended the war. Joining him, from left, were Carmen Smith, Levy's granddaughter Angela Alexopoulos, his wife Fran, their daughter Kimberly Alexopoulos, and Levy's former Buffalo Bills defensive star Bruce Smith, who, like his coach, is a Hall of Famer. (Photo courtesy Holly Rotondi)

Levy, in his mid-90s, is among the youngest of the World War II veterans still here. “There were 16 million of us,” said Levy, referring to the number of Americans who served. “There are now less than a half million still around.”

There actually are fewer than 400,000 World War II veterans alive today, and they are dying at a rate of more than 300 a day.

“They’re leaving us quickly,” said Holly Rotondi, executive director of the Friends of the National World War II Memorial. “This is our last chance as a nation to really say thank you.”

Marv Levy: Kneeling for the anthem disrespects our country

That’s why Rotondi asked Levy to help gain the NFL’s support as part of her organization’s large-scale effort to recognize the 75th anniversary of the war. Levy asked Polian’s advice on whom he could speak with in the office of NFL Commissioner Roger Goodell.

“Let me make some calls,” Polian told Levy. But it took only one call to the league office from Polian, who like Levy is a Hall of Famer, to find the right person: Anna Isaacson, the NFL’s senior vice president of social responsibility. In her job, Isaacson uses the league’s large platform of influence to focus on five priority areas: cancer prevention, health and wellness, healthy relationships, social justice, and military appreciation and support.

Polian phoned Isaacson in October and asked her to look out for a call from Levy. Even as she hung up with Polian, Isaacson already had a voicemail from the former coach. After a few missed calls and voice messages, Levy, who is a prolific emailer, introduced Isaacson to Rotondi. The three began a lengthy email string trading ideas for how NFL teams can honor World War II, ranging from in-stadium video tributes to bringing veterans and their families to a game. Ultimately, Levy hoped that Isaacson would share his request with all 32 teams.

“I could hear the passion in his voice and I could see it come through in the emails as well,” Isaacson said. “This one was a natural. It was very easy to say yes.”

‘Greatest Generation’ a humble one

One of the long-held challenges with honoring World War II veterans is one of simple, humble silence: Many of them never brought up that they were in the war.

“There was this kind of compact of World War II veterans,” said Tom Brokaw, the longtime NBC journalist whose 1999 book, “The Greatest Generation,” told the stories of many who served. “One of them said to me one time, ‘If you were in combat, you didn’t talk about it.’ ”

Brokaw, like Levy, is a supporter of the Friends of the National World War II Memorial. The two shared a mutual connection – the late NBC newsman and Buffalo-born Bills booster Tim Russert – and once sat together at a dinner with Winston Churchill’s daughter. They also share an appreciation for people in their lives who served with valor but never spoke of it.

For Brokaw, who at 79 was a young child during the war, that was his track coach as a teenager in South Dakota. This coach, whose name was Jack Downey, was a father figure to his athletes, with “a great sense of humor,” Brokaw said, and “this unbelievable ability to relate to all of us.”

Downey, presciently, used to tease Brokaw for being a better speaker than an athlete. When Brokaw qualified for a state championship meet, Downey joked, “What are you doing here? Are you going to speak?”

“It was a great line,” Brokaw remembered by phone last week. Downey was on his mind because the coach died one month ago, at age 93. Only when Brokaw read Downey’s obituary did he realize that his former coach had been a navigator on a B-25 bomber during the war. “He never talked about it,” Brokaw said. “I didn’t have a clue that he’d been in the war, at all. That was so characteristic of those people.”

It was characteristic, too, of Levy’s longtime friend and team owner, the late Ralph Wilson Jr. Some 18 years before he invested $25,000 to start a football club called the Buffalo Bills, Wilson dropped out of law school in Michigan and enlisted in the Navy. The Japanese had attacked the United States at Pearl Harbor; America was going to war, and Wilson wanted to serve. He became a lieutenant commander in the Navy, leading minesweepers in both the Atlantic and Pacific.

It was dangerous work: Minesweepers find and remove explosives, clearing the way for other ships. One wrong move would be deadly. Years later, Wilson wouldn’t discuss it. Polian tried. Levy tried. But Wilson always changed the subject. “He never talked much about it,” Levy said. “He was modest.”

Lessons to be held

The deepest evidence of Wilson’s experience in the war is found in a series of letters he wrote to his parents. Wilson’s wife, Mary, donated some of those letters, along with her husband’s uniform, to the Buffalo and Erie County Naval & Military Park, where they are on display. “One of the things he said in the letter which I found very important is it really taught him to be a leader,” Mary Wilson said. “The decisions you make, a lot of people are depending on them.”

In a 1943 letter to his father, whom he called “Pop,” Wilson wrote, “The lives of many men and the ship itself may depend on one little order. It all boils down to the simple fact that you can’t be wrong. I sincerely believe that this is great training which will be invaluable to young men later on in civilian life. It gives one self-confidence, which is a great asset to my way of thinking. It teaches a person to depend on himself rather than on others.”

For lessons like those to endure, it will take reading, discussing and before all of that, remembering. There’s still a chance – though a fleeting one, as time passes – to recognize the lessons of the war while also thanking those who served.

Levy wants all NFL teams to take up his invitation. So far, about a third of the clubs have specifically honored World War II veterans. The Bills, for example, had a group of veterans to a Saturday practice last month and then to the game on Sunday. Levy is optimistic that the league will incorporate World War II recognition into Super Bowl week or the events around the championship game itself, and he also points out that the anniversary of the end of the war is Sept. 2 of this year — well-timed for the start of the 2020 NFL season.

He’s hopeful that NFL teams will embrace that opportunity to say thank you. 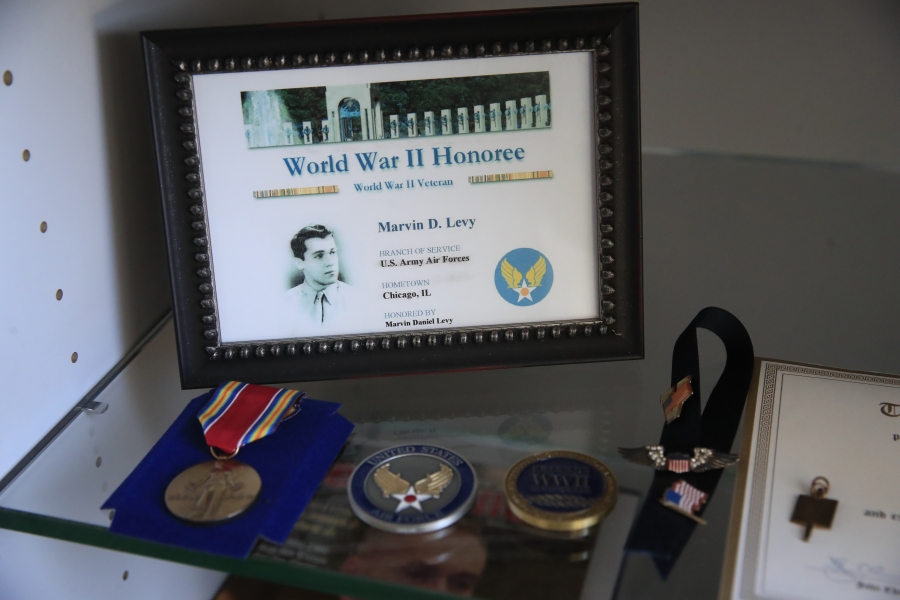 Marv Levy enlisted in the military the day after graduating from high school, but World War II ended before he could be deployed to the Pacific. (Harry Scull Jr./Buffalo News)