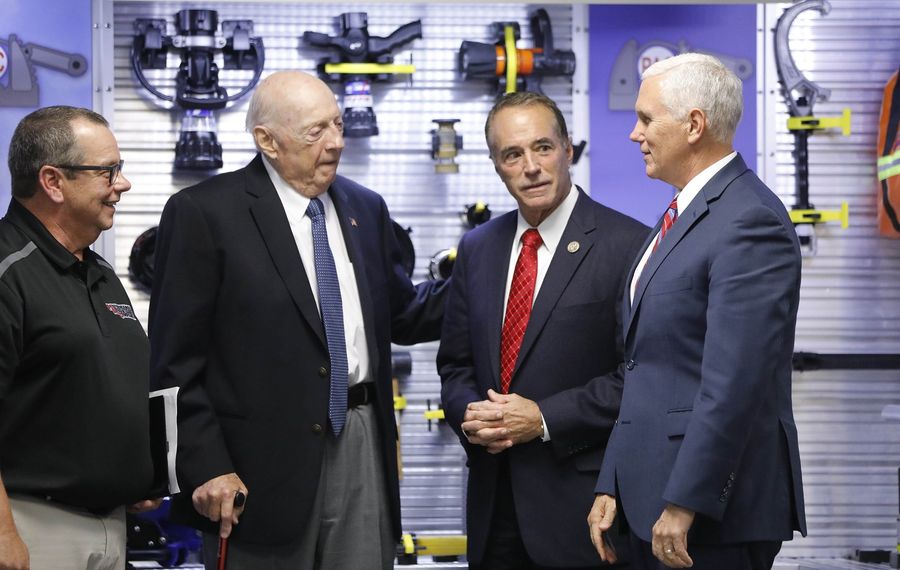 WASHINGTON – Former Rep. Chris Collins closed out his political career in late December by repaying himself $146,393.71 in leftover campaign funds – without reimbursing his donors for the $15,400 they gave to his campaign committee early last year when he said he was innocent of insider trading charges.

Federal campaign documents filed late last month show Collins used that campaign money to repay himself for a loan he gave to his 1998 race for Congress against then-Rep. John J. LaFalce, a Democrat from the Town of Tonawanda.

Campaign finance experts said Collins' move is legal, but some question its wisdom – especially given that Collins is scheduled to face a federal judge in New York next week who will sentence him after his guilty plea to charges stemming from that insider trading case.

"He's operating within the limits of the law, but it sure does look bad," said Craig Holman, public affairs lobbyist for the left-leaning Public Citizen good government group. Holman filed the first congressional ethics complaint against Collins three years ago.

Collins' last political maneuverings are spelled out in a series of filings he made with the Federal Election Commission in December.

"I think he had really nice parents who contributed to all of my campaigns until he ran against me," LaFalce said. "That's the nicest thing I can say about Chris Collins."

Collins' attorney, however, said the former congressman had to repay that loan to himself to close out the 1998 campaign committee's activities, even though the FEC sent the campaign a letter in 2004 terminating its obligation to report quarterly to that agency.

"The FEC specifically acknowledged in its August 10, 2004, letter to the committee’s treasurer that notwithstanding the administrative termination of reporting obligations, the 1998 Collins for Congress Committee was not relieved of its legal responsibility for outstanding debts or obligations," that attorney, Jonathan R. Barr, said in an email. "To close the committee, the law requires that all debts be zeroed out and that the committee must have a zero balance."

Barr said Collins did not use funds raised for his 2020 campaign as part of the repayment for the 1998 loan, but he did not reply to an email seeking a further explanation of how this could be.

Collins' campaign took in $15,400 in 2019, ahead of the November 2020 election. But Collins resigned in September shortly before pleading guilty in federal court. A special election is expected to be held to fill Collins' seat.

So an eclectic group of donors gave money to Collins last year and never got their money back, even though federal law allows candidates and former candidates to reimburse unused donations.

Those Collins donors include the Humane Society Legislative PAC, which gave Collins $1,000 last April 22 – more than eight months after he was indicted.

The last donor to give money Collins was Silvio Palermo, a police sergeant in the Town of Gates who ran an unsuccessful race for Ontario County sheriff last year. He gave Collins $100 last Aug. 15, part of $300 in total that the law enforcement officer gave to the indicted Republican lawmaker from Clarence.

Young also defended Collins against the insider trading charges to which he pleaded guilty.

Collins will be sentenced on Jan. 17 on charges of conspiracy to commit securities fraud and lying to a federal agent. The charges stem from a June 2017 phone call in which Collins – a longtime board member of an Australian biotech called Innate Immunotherapeutics – gave his son, Cameron, inside information that allowed him to dump his shares in the company before it announced bad news the following week. Cameron Collins and his future father-in-law, Stephen Zarsky, also pleaded guilty and will be sentenced later in January.

Calling Collins "one hell of a guy" who did an excellent job in Congress, Young noted that Collins never dumped his own Innate shares.

"So what the hell did he do wrong?" asked Young.

It wasn't just donors like the Humane Society and Young who never got their donations to Collins returned. About three dozen people – including Orchard Park Town Supervisor Patrick Keem – paid the Collins' campaign $55 last year to have coffee with the congressman.

"I'm not gonna comment on it," Keem said. "It's his life, his choice. Would I have done it? Probably not."

Keem also noted that his $55 contribution to join Collins' "coffee club" didn't pay off.  He never got a notice for any such meeting with the then-congressman.

"I didn't even get a coffee – not even one coffee," Keem said.