Mary Kromer reached the 100-point career mark with her second goal of the game in the first period and Brooke Becker scored three times and added two assists for FLOP (Frontier/Lake Shore/Orchard Park) in an 11-1 win over HEWS (Hamburg/Eden/West Seneca) on Monday at the West Seneca Rink.

Kromer, a senior from Lake Shore, also had three assists in the game.

HEWS took the lead just 15 seconds into the game on a goal by Bella Cervoni.

“It was kind of a fluke goal and we took it too them pretty good after that,” said FLOP coach Robert Klimowicz.

Keegan Shanahan and Jordan Joyce each had a pair of goals for the winners, who are now 7-2 in the Western New York Girls Varsity Ice Hockey Federation with an important game with LID (Lancaster/Iroquois/Depew) on Wednesday at Hamburg Nike.

Williamsville and Monsignor Martin played to a 1-1 overtime tie in their game at Riverworks.

Sophomore Vanessa Willick scored for Williamsville (9-1-1-0) while Abby Marion had the goal for Monsignor Martin (7-3-1-1) and Sophia Will made 23 saves. Mia Wendell had 18 saves for Williamsville.

Orchard Park withstood a lights-out 3-point shooting performance by senior Breht Swiech of Williamsville North to defeat the Spartans on their home floor, 73-71. A layup by Jackson Roskow of the Quakers broke a tie with under a minute to play. North had two possessions after that, but did not score.

Swiech finished with 39 points, including nine 3-pointers. He had 14 points in the first quarter and 27 at halftime, including seven 3-pointers, and 32 points after three quarters.

Williamsville North led 44-36 at the half and 58-56 after three. It was back and forth until the end after that.

Tino Mancabelli of the Quakers scored seven of his 17 points in the fourth quarter. Brad Fowler’s scoring in the third helped OP close the deficit. He led the Quakers with 20 points. Roskow had 15 points. David Bass had 14 points for North.

Swiech had 32 points for the Spartans in a win over Clarence two weeks ago.

Demarri Jones was high scorer for Jamestown with 18. Trey Drake had 14 and Elijah Rojas 12 for the Red Raiders. 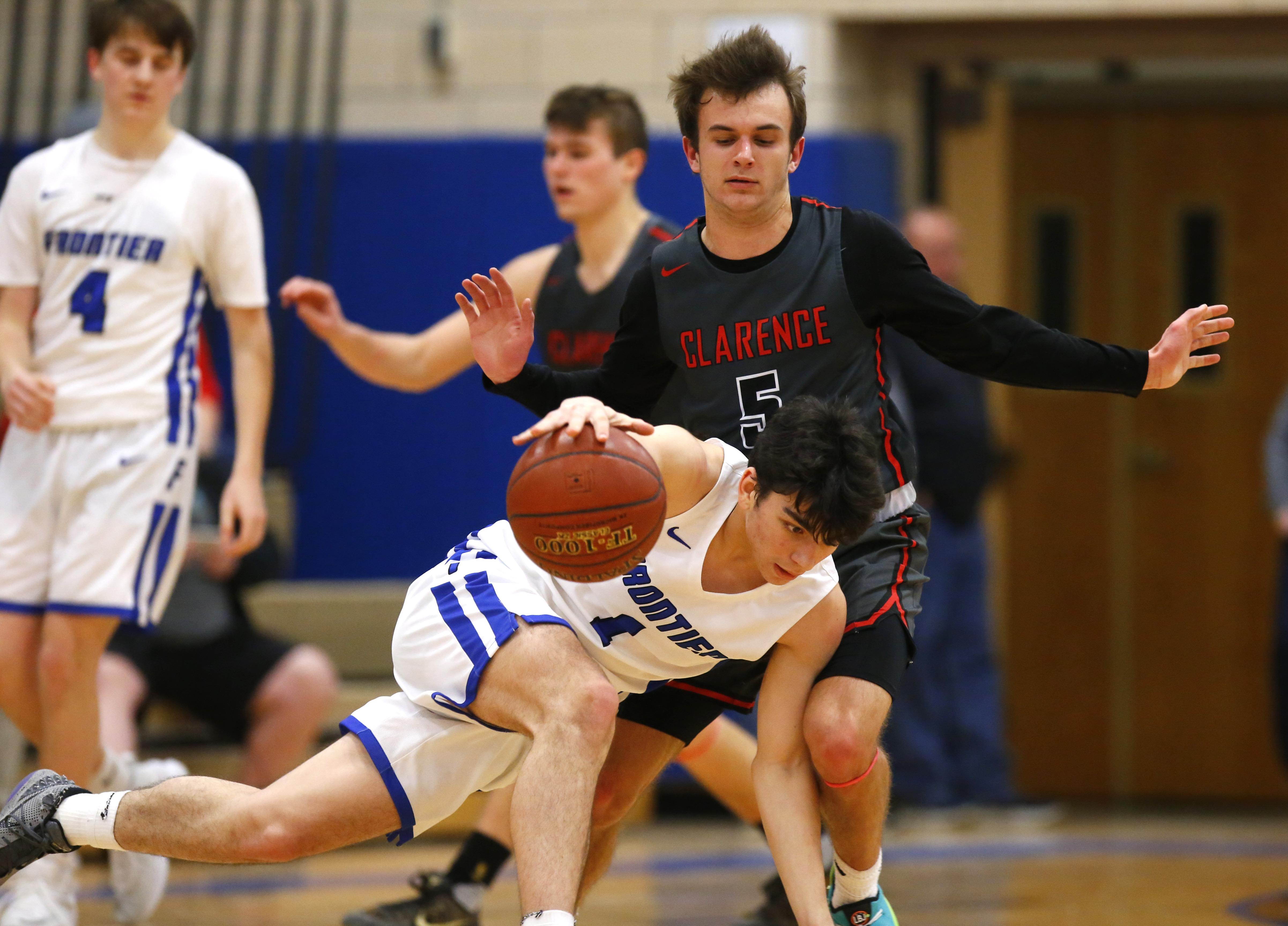 Frontier broke into the ECIC I win column with a 42-35 win over visiting Clarence.

Brandon Okie had 13 points and Tanner Fadale 10 for the Falcons.

Two-sports star Cal Shifflet of Williamsville East passed the 1,000-point mark for his career when he scored 30 points for the Flames in a 70-60 ECIC II basketball victory at Starpoint.

The 30 points was a season high for Shifflet, a 6-foot-4 senior. He came into the game needing nine points to reach 1,000.

He got there when he was fouled on a layup in the final minute of the first quarter. He made the free throw to complete the three-point play. He finished the game with 1,021 career points for East (9-1, 2-1). Sophomore guard Max Schneider had 17 points for the Flames.

Sam Walters had 12 points in the loss, all on 3-pointers.

In football, Shifflet made the first team All-A-1 team as a linebacker on defense. He also was receiver on offense.

Back from break, Flyers triumph over Lake Shore

After 10 days without a game, Maryvale opened the 2020 portion of its ECIC III schedule with a 75-55 triumph over visiting Lake Shore.
Coach Ryan Mohr’s Flyers broke the game open in the second quarter when they outscored the Eagles, 21-5.

“We knocked down four threes and we did a nice job against three guys averaging double-digits and held two of them to single digits,” Mohr said. “We threw a press at them and created some turnovers.”

Xaier Mitchell scored 21 points to lead Maryvale and was one of three Flyers to make three 3-pointers each.

The others were Jayden Morgan and Andrew Dockery, who scored 15 and 13 points respectively. Mitchell also had 10 rebounds while Dockery had seven boards.

Maryvale (4-2) is 2-1 in division play with the loss coming at home against first-place Iroquois.

Sophomore Trevin Boling scored 30 points, including four 3-pointers, to lead Tonawanda to a 58-44 triumph at Eden in ECIC IV. Hunter Stetz had 23 points for the losing Raiders.

It was the second win in two ECIC IV starts for the Warriors.

Lackawanna overcame a 24-point shooting performance by Alan Suarez in a 61-56 ECIC IV victory over JFK. Suarez had four 3-pointers in his output.

DeMarion Johnson matched Suarez with 24 points for the Steelers, also including four threes.

Aidan Horan scored 27 points in leading Nichols to a 68-49 triumph in a nonleague game at Bennett. Jesse Adamu had 17 and Hugh Purks 15 for the Vikings. Demario James and Davon Scott scored 13 each for the Tigers.

Danielle Haskell, who has signed with Canisius College, scored 26 points to lead Franklinville over Randolph, 57-46, in CCAA East I girls basketball. Abby McCoy had 22 points for the winners.

Randolph was led by Sydney Hvizdak’s 20 points and 18 by freshman Kyra Pence.

According to @PrepStarNY, Aidan Shaw, the 2019 Section VI boys golf champion will attend St. Bonaventure after he graduates from Orchard Park in June.