Colleen Drake invested $200,000 with Amherst financial adviser James D. Tetrault after she received an injury settlement from a horrific car crash that killed her fiancé and her niece.

According to the Cheektowaga woman, Tetrault stole almost every penny.

Eleven years ago, a federal judge ordered Tetrault to pay $5.35 million in restitution to 56 victims – including Drake and her mother – when Tetrault was sentenced to prison for the investment scam.

Tetrault got out of prison seven years ago, but Drake and other victims are still waiting for their money.

“My mother died nine years ago. Over the years, her estate received no more than $1,000. I haven’t received anything,” Drake, 56, said. “The last restitution check that was sent to my mom’s estate was on Jan. 25, 2017. That was for thirty dollars and sixty cents.”

In Drake’s view, Tetrault’s restitution order "isn’t worth the paper it was printed on."

The Tetrault case is not unusual, The News found in an investigation into local restitution cases.

Over a four-year period, from 2015 through 2018, federal judges ordered a total of $114.5 million in restitution to Western New York crime victims, mostly in cases involving fraud. Prosecutors were able to recover $28.2 million for the victims, 25% of what they are owed, according to U.S. Attorney James P. Kennedy, who is based in Buffalo and oversees federal prosecutions in 17 counties.

“We’d like to do better for the victims, and under the law, it’s our obligation," Kennedy said. "We do our level best to recover as many assets as we can, but many of the people we’re trying to recover money from are scamsters who have always put their own interests above all others.”

In a few cases, prosecutors in Western New York have recovered most of what's owed to victims. Kennedy pointed to the case of Michael Wilson, an investment scam artist who – at age 21 – bought a $6.3 million mansion in Hamburg. After pleading guilty to a fraud charge, he was sentenced last year to nine years in prison and ordered to pay $2 million in restitution.

“In the Wilson case, we recovered assets from banks and property he owned all over the world, including Singapore, New Zealand, Vietnam, Canada and the Grenadine Islands. We got about 70% of the money back for the victims,” Kennedy said.

That was uncommon – both locally and across the nation. A study completed in 2018 by a federal watchdog agency showed that U.S. crime victims were owed more than $110 billion in restitution payments from swindlers, scam artists and other criminals who had been sentenced in federal courts. More than 90% of that money – or about $100 billion – has been identified by prosecutors as “uncollectable due to offenders’ inability to pay,” according to the U.S. Government Accountability Office.

Restitution is "a false hope in many cases," said Paul J. Campana, a retired federal prosecutor who handled the Tetrault prosecution. Campana said many fraud artists spend money quickly, and some are able to hide their money from authorities.

When Tetrault was sentenced, “he seemed to honestly hope and believe that he could get the money to repay the victims, but I think he was dreaming,” said K. Michael Sawicki, the attorney who defended Tetrault.

The victims were hopeful, too.

“Between my mother and I, we lost $300,000 to this guy,” Drake recalled in a recent interview. “After everything we went through, we were thankful to hear that day in court that at least we’d get some of our money back.”

Tetrault did not respond to The Buffalo News' requests for comment. A woman who identified herself as a relative of Tetrault said he has been trying to earn money to repay the victims.

“In my experience, it is rare for victims to get even as much as 10% of their money back in a restitution case,” said Sawicki, an attorney for 45 years whose career included time as a county and state prosecutor. “Let’s face it, you’re looking for a person who has swindled you to get you your money back.”

“Sometimes, restitution orders are enforced and sometimes they aren’t,” said Mai Fernandez, executive director of the National Center for Victims of Crime. “The effectiveness of restitution relies on the criminal paying the victims back, and on prosecutors being able to collect from the criminal. Sometimes, it’s like getting blood from a stone.”

In one local case, a man ordered to pay millions of dollars in restitution to his victims wound up getting back into trouble – and facing a new criminal case – after his release from prison.

That man is Robert C. Logel, 56, an investment adviser from Ellicottville who was sent to prison for four years in 2009. In that case, judge ordered Logel to repay $5.6 million to 18 victims, most of them from Western New York.

Logel was released from prison in May 2013. Under a court order, he was required to pay 10% of his gross monthly income into a fund for his victims.

By early 2017, Logel was running a new investment scheme involving health care ointments and other products, and was again under investigation by the FBI and Internal Revenue Service. Agents arrested him that February on charges of wire fraud and tax evasion.

Kennedy said Logel made false claims to his investors. Instead of investing his victims' money in his business selling health care products, he spent most of it on personal items such as car payments, college tuition, rent for his and his girlfriend's apartments and cosmetic surgery.

He pleaded guilty to a new set of fraud charges in April and faces a new sentencing in January. Logel is now represented by a federal public defender under a program to help defendants who are destitute and unable to pay their attorneys. 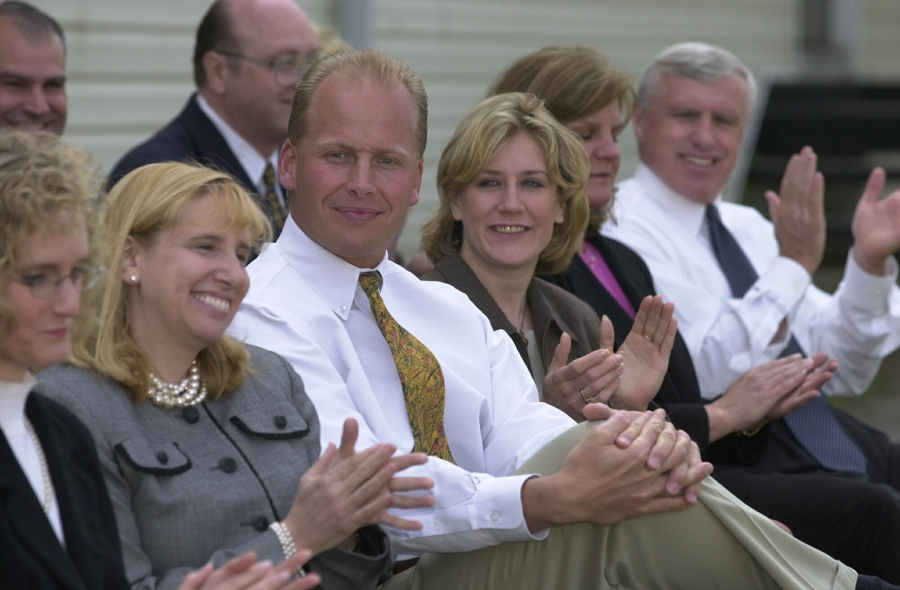 Local dignitaries applaud Robert C. Logel, at center in white shirt) in 2001 after he pledged $100,000 to Daemen College for its new theater. Logel, an investment adviser, was sent to prison for four years in 2009 and ordered to repay $5.6 million to 18 victims of his investment scam. So far, Logel has paid only $8,700 in restitution. (Harry Scull Jr./News file photo)

And Logel may be ordered to pay millions more to victims of his latest scam, court records indicate.

That is unfortunate for Kent Keehn, 73, a Texas investor who lost $2.2 million to Logel in the scheme that led to his 2009 guilty plea. Court documents show that Keehn lost the most of any of the victims, who also included two former Buffalo Sabres stars, Patrick LaFontaine, who lost $650,000 and Donald Audette, who lost $275,000.

When asked how much money he received from Logel, Keehn said: “Not one penny. Nor have I ever received any word of apology or explanation from the Justice Department.”

“As far as I’m concerned, there is no government restitution program,” Keehn added. ““I’m sorry for his family that Rob is back in trouble again…As far as getting my money back, I’ve written that off as a loss.”

Logel declined to speak to The News. His attorney, Fonda Dawn Kubiak, said Logel wanted to repay victims, but as a convicted felon, found it hard to get work after his release.

She said Logel got back into trouble because he formed a “high risk startup company,” and made “many poor decisions.” She said he regrets his actions and still hopes to repay his victims someday.

Kennedy called Logel a “classic fraudster” and said it is extremely difficult to recover assets from people like him.

But in the future, if an individual such as Logel ever hits the lottery or comes into money in some other way, Kennedy said “we’ll be there to come after his assets for restitution.”

She says she is trying to pay

Lori Macakanja’s victims have other problems. A former counselor with Buffalo’s HomeFront organization, she was supposed to advise poor and middle class people on how to save money for a first home and avoid foreclosure. Instead of helping people, Macakanja stole their money and gambled it away at casinos.

In 2012, a judge sent her to prison for up to six years and ordered her to pay nearly $300,000 in restitution to more than 130 victims. At her sentencing, Macakanja made an emotional apology and vowed to do whatever it takes – including working 80 hours a week – to repay the victims.

Out of prison since 2017, Macakanja has repaid about $13,000 so far, according to a source familiar with her case. The source said she pays at least $500 a month toward restitution.

At that rate, it would take Macakanja more than 48 years to repay the rest of the money.

“I’m working hard and trying my honest best to repay these people,” said Macakanja, now 44. “I would do anything to go back and undo the things I did. If I could get a loan for everything I owe them, I’d do it in a minute.”

She said she used to wait on tables at a diner, but declined to discuss her current job.

Two of her victims, Glenn Hawes of Angola and Gina Hernandez of Buffalo, said Macakanja’s thefts hurt them financially and made them reluctant to trust anyone.

“Lori owes us $5,607.18. I’ve gotten some small checks from the restitution fund, totaling $159.61,” said Hernandez, a city schools crossing guard. “At this rate, it’s going to take a very long time to get our money back.”

What makes it more painful, according to Hernandez and Hawes, is what happened when they sued in state court trying to get HomeFront – Macakanja’s employer -- to pay them their money back.

So far, the state courts have found that HomeFront is not responsible for Macakanja’s actions, ruling that she was an out-of-control employee acting outside the scope of her duties for the not-for-profit agency.

“We’ve hardly gotten any of our money back,” Hawes said, “and nobody wants to take responsibility for Lori’s actions. It’s almost like they are waiting for us to die off.”

And according to court records, three of Macakanja’s victims have died since she was sentenced.