Buffalo Bills fans had a lot to be upset about Saturday night.

Somewhat surprisingly, listening to Booger McFarland shouldn’t have been one of them for much of the game.

I didn’t have any problems with McFarland’s analysis on ABC affiliate WKBW-TV and ESPN in the first half of the Buffalo Bills’ 22-19 playoff loss to the Houston Texans.

I told people on social networks not to prejudge him, as hard as that might have been. The much-criticized "Monday Night Football" analyst was much better than expected in the first half.

“The thing that jumps out at me is the poise of Josh Allen,” said McFarland in the first half and a few other times during the game.

He also was as dumbfounded as most Bills fans by a Frank Gore run in the final minute of the first half that made it seem like the Bills were settling for a field goal. They did.

His head-scratching moment came in the last 15 seconds of regulation when he suggested the Bills consider running on third down to get a few yards and then spiking the ball before trying a tying field goal. Of course, the field goal would have been on a fifth down, which doesn’t exist.

It wasn’t quite as big a mistake as McFarland thinking on a "Monday Night Football" game that the 2018 Minneapolis Miracle playoff victory over the New Orleans Saints cost the Vikings a victory. But it was in the neighborhood.

He also lost me when he said the keys to a Houston second-half comeback would be for quarterback Deshaun Watson, receiver DeAndre Hopkins and defensive end J.J. Watt to make plays.

Duh. The late Howard Cosell would say that McFarland often had “a firm grasp of the obvious” in the second half when his cliches piled up like the missed tackles by both teams. In an interview this week, McFarland told me having two men in the booth instead of three allows more time for dead air. However, he seemed to be talking nonstop.

He gets credit for predicting a key blitz called by Bills defensive coordinator Leslie Frazier in overtime and accurately blaming the Bills defenders for allowing Houston to convert a third-down and 18 to go on the winning field goal drive by playing coverage that Frazier would lament was softer than he would have liked the players to play.

And he asked Daboll to be creative again before a long gain on a throwback pass to Devin Singletary on a drive that ended with two disastrous plays by Allen after the Bills were initially in field goal range to tie the game in the fourth quarter.

Some people might criticize McFarland for instantly supporting Houston coach Bill O’Brien’s “aggressive” decision to go for it on a fourth down and yard to go at the Bills’ 30-yard line with under 90 seconds left in regulation rather than try a field goal to take a six-point lead. The decision backfired and led to the tying Bills field goal that sent the game into overtime. 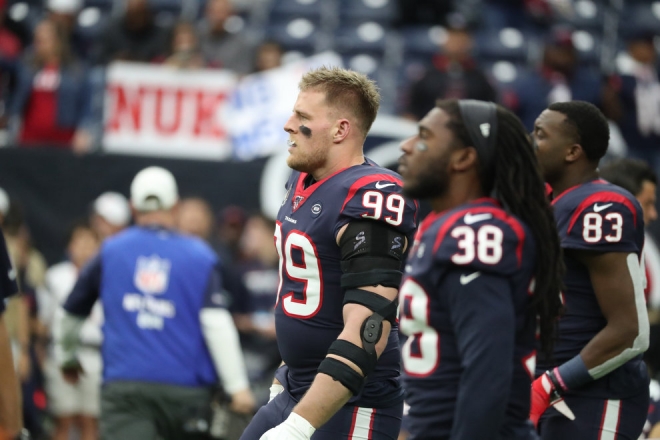 I don’t blame McFarland for that take. All I ask for from an analyst is to have a reasonable opinion, even if it turns out to be wrong.

I also supported his opinion that the officials did a nice job allowing the Texans to recover what appeared to be an Allen fumble because all turnovers are automatically reviewed. The fumble was overturned on review.

Play-by-play man Joe Tessitore had a great excitement level calling all the crazy plays in the game.

Tessitore’s calls of Allen’s touchdown catch, Hauschka’s game-tying field goal (“How about it, Buffalo!”) and Watson’s magical moment of avoiding two blitzing Bills before hitting the pass that decided the game in overtime were Rick Jeanneret terrific.

I’m sure Tessitore aggravated Bills fans because he was so excited that the Texans were making a game of it after trailing 13-0. But announcers root for good games.

Bills fans likely were more aggravated by the announcers’ deification of Watt, which undoubtedly reminded them of a game with the Patriots years ago in which Tedy Bruschi was given the same treatment. Watt’s sack of Allen that turned the momentum around came on a play in which no Bill appeared to be open anyway and led to Stephen Hauschka kicking one of his four field goals.

McFarland also noted that Watson reminded his Clemson coach of Michael Jordan, which is an overreach.

The officiating expert John Parry was informative when he analyzed several questionable calls. He accurately predicted the outcome of most of them, including O’Brien’s foolish decision to use an early challenge in hopes of getting a defensive pass interference; the overruling of an Allen fumble because his knee was down; and the reversal of a Bills touchdown on the second half kickoff because he said it was “common sense officiating” to reverse it after the Texans’ DeAndre Carter gave himself up.

Parry saw the supposed blindside hit by Bills tackle Cody Ford that kicked the Bills out of field goal range in overtime before the officials confirmed the call. But was the call, which may have cost Hauschka a chance to kick a 55-yard game-winning field goal, a correct one?

McFarland supported it, saying: “You just can’t do that. No need to make that play other than selfishness.”

That seemed a little harsh even before Ford said after the game he is taught in practice to play that way.

Selfishly, I wish Parry had weighed in again after the replay showed Ford was looking right at the guy he supposedly was blocking. The Texan certainly wasn’t blindsided. It didn’t make “common sense” to former NFL players Chris Long and Shaun O’Hara, who tweeted that they didn’t like the call. And Fox officiating expert Mike Pereira wrote on Twitter that he thinks the call was “incorrect.” 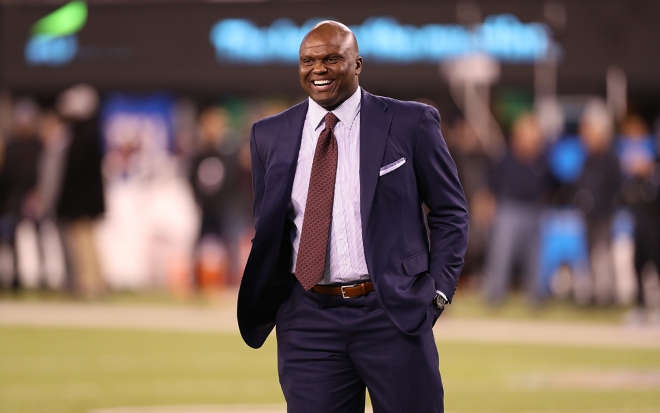 Now on to more highlights of the final game of the Bills season.

Best Game Summary: On ESPN’s SportsCenter immediately after the game, co-host Michael Eaves said they were watching the end game “dumbfounded but excited at the same time.” Replied co-host John Andersen: “Emphasize, to some degree, on dumb.”

J.J.’s Audition: Watt was mic’ed up, which enabled viewers to hear as many clichés as McFarland told in the second half. In the first half, Watt looked like he belonged more in the ESPN booth than on the field.

Buffalove: Pregame host Suzy Kolber gave the Bills and their fans so much love on the pregame show that she sounded like she was rooting for Buffalo. “Bills fan deserve this,” said Kolber. “They deserve to have their guy (Allen) and they deserve a day like today. And they are having so much fun in the stadium.”

Kicking Themselves: ABC was a little too quick to go to sideline reporter Lisa Salters at the start of the second half when the Bills briefly appeared to have scored a touchdown after the Texans' Carter was wrongly believed to not have downed the kickoff.

I Spy: McFarland noted that the Bills’ Tremaine Edmunds was spying on Watson on one key play, but he didn’t seem to realize it wasn’t the first time.

Best Cliched Lines: After Watt let an Allen pass go through his hands, McFarland said: “That’s why J.J is a defensive end instead of a tight end.” After a nifty Singletary run, McFarland said: “He can make you miss in a phone booth.” That line is so old that phone booths barely exist now.

Misfire?: McFarland blamed Allen for waiting too long to throw a pass to Brown inside the 5-yard line near the sideline when it was debatable whether the incompletion really was Brown’s fault for failing to keep his feet in bounds. In the overtime, McFarland praised Allen’s poise before conceding Allen played like a rookie “sometimes.” Of course, Allen is a second-year player, not a rookie. If anything, McFarland overpraised Allen, who was fortunate to have three interceptions dropped and unfortunate to have a tough touchdown pass dropped by Duke Williams. The quarterback also made some dumbfounding plays in the fourth quarter and overtime that deserve to make ESPN’s “C’Mon Man” segment. Tessitore was more balanced in his opinion on Allen, notably shocked by the quarterback’s crazy lateral in the 65 seconds of regulation after a long run that almost cost the Bills’ the tying field goal.

A “Wide Right” Miss: As Hauschka lined up for the tying 47-yard field goal that sent the game into overtime, Tessitore noted that it was the first Bills field goal attempt late in a playoff game since Scott Norwood missed the field goal in Super Bowl XXV. He missed noting the eerie coincidence that Norwood’s field goal attempt was the same length as Hauschka’s kick, though everyone in Western New York was thinking about Wide Right. He also didn’t note that the play clock was at zero before the Texans’ key third down and 18 overtime play. When the play went to review, you wondered if that was the reason for it or if a play clock issue is even reviewable.

Watt the Heck? Salters told viewers that J.J. Watt prepared for the game by wrestling his brother, the Pittsburgh’ Steelers' T.J. Watt. After she asked T.J. if they took it easy, she said he replied: “We’re brothers. We wrestle all the time. We never take it easy.”

Bad Timing Award: After McFarland praised Allen’s poise again in the fourth quarter, the quarterback fumbled, which led to a Texans field goal.

Wake Up Call: After McFarland noted that Watson was “in rhythm” – his favorite expression this season – he added: “Everybody knew Deshaun Watson was going to wake up. (I didn’t). He has the heart of a champion.”

He Speaks for America: After the officials correctly reversed the Bills touchdown at the start of the second half, McFarland said: “I don’t think America wanted this to happen.” I live in part of America that might dispute that. The part of deserving America that Kolber talked about and whose citizens undoubtedly said after the Bills heartbreaking loss, “we didn’t deserve this (again).”