That’s why, when he was diagnosed with Parkinson’s disease five years ago, he kept it quiet. Only his closest family members knew. His younger brother Jeff already had Parkinson’s, and though he was living a healthy, active life, Jeff told Jack that people sometimes treated him differently.

Jack Quinn, a former congressman and college president, didn’t want that. But you can’t hide Parkinson's — especially when you’re a public figure. So when Quinn finally decided to make his diagnosis public through a pair of stories last year in The Buffalo News, he chose to make it into something that, as a six-term congressman, he knew well: a campaign.

“If I talk about it, I can talk about the help that’s out there,” Quinn said. “You can work with this. You can be productive. There’s no reason to keep it a secret.”

Quinn was treating his disease in part through participating in a Kenmore program called Parkinson’s Boxing. It had been so successful for his brother that Jeff Quinn started working there as a trainer. Jack, too, was having success in the program, rebuilding much of the strength and balance that Parkinson’s had stolen. By going public, Quinn could help promote and build the program. He could also help raise research money and awareness on a national level for Parkinson’s disease.

Today, he’s pressing local health insurers to cover the Parkinson’s Boxing program, and he’s tapping his Washington political connections to advocate for increased funding and support. Parkinson’s Boxing has doubled its hours of service and has dozens more clients, many of whom say they joined because of Quinn. At the same time, Quinn is regularly meeting with powerful people: members of Congress, a cabinet secretary, health-company CEOs.

He has a platform that he’s pushing aggressively.

Put another way, he's back to doing what he has always done. 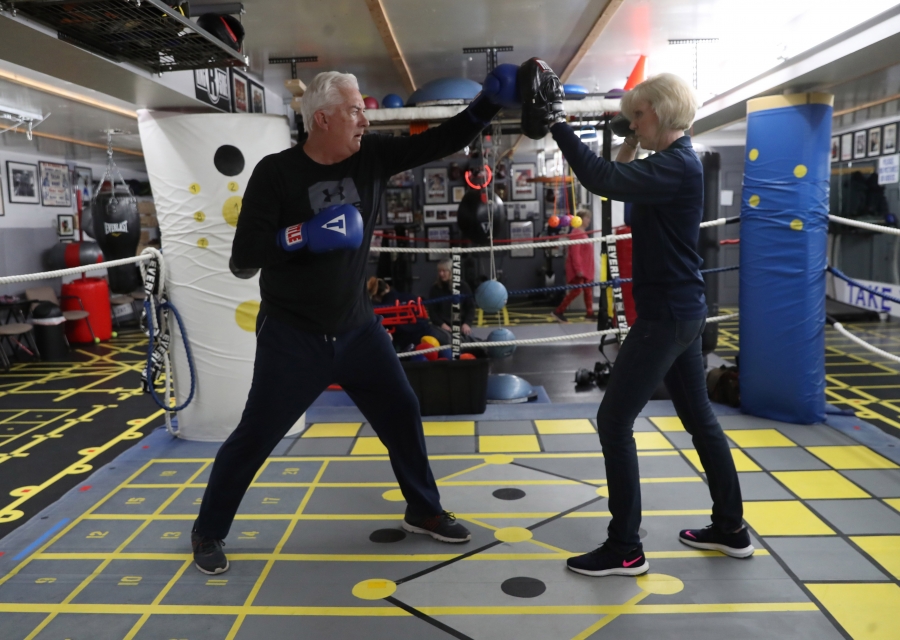 Quinn has long been powerful, strong and influential. He was a middle-school English teacher who became a Hamburg town supervisor, then a congressman, briefly a lobbyist, and after that, president of Erie Community College. By position and by demeanor, he commanded every room he entered.

“There is a guy who had gifts, a gift to connect with people,” said Rep. Brian Higgins, who succeeded Quinn in Congress when Quinn retired in 2005. They are political opposites – Quinn, a Republican; Higgins, a Democrat – but built a strong friendship. “Big, tall, handsome, gregarious,” Higgins added, “and, I think, fundamentally good.”

Higgins noticed something was different about Quinn four years ago when the former Congressman delivered a eulogy at the funeral for former State Supreme Court Justice Kevin Dillon. “There’s something not right with Jack,” he said privately to a mutual friend.

Before Quinn widely revealed the news of his disease, he visited Higgins in his office and told him about his diagnosis. That conversation was private, but soon enough, Quinn was back. In 2019, after going public and lifting his self-imposed silence, Quinn began assisting the Michael J. Fox Foundation for Parkinson’s Research. In September in Washington, D.C., both Jack and Jeff Quinn joined a group of Parkinson’s advocates from around the country for a day of meeting with lawmakers on Capitol Hill. Higgins was among them.

“I saw a guy with a renewed purpose,” said Higgins, who is pushing for increased National Institutes of Health funding for both Parkinson’s and Alzheimer’s disease research. He believes there could be a “major breakthrough” in treatment for those diseases in the next five years.

That is Quinn's goal, too.

“I want to see it in my lifetime,” said Quinn, who is impassioned by the work he’s doing. He works closely with Ted Thompson, senior vice president of public policy for the Michael J. Fox Foundation, and is armed with talking points aimed at showing members of Congress why Parkinson’s research funding should be a priority. The biggest one: The federal government spends $25 billion annually on Parkinson’s treatments, mostly through Medicare, but invests only $191 million each year in researching the disease. 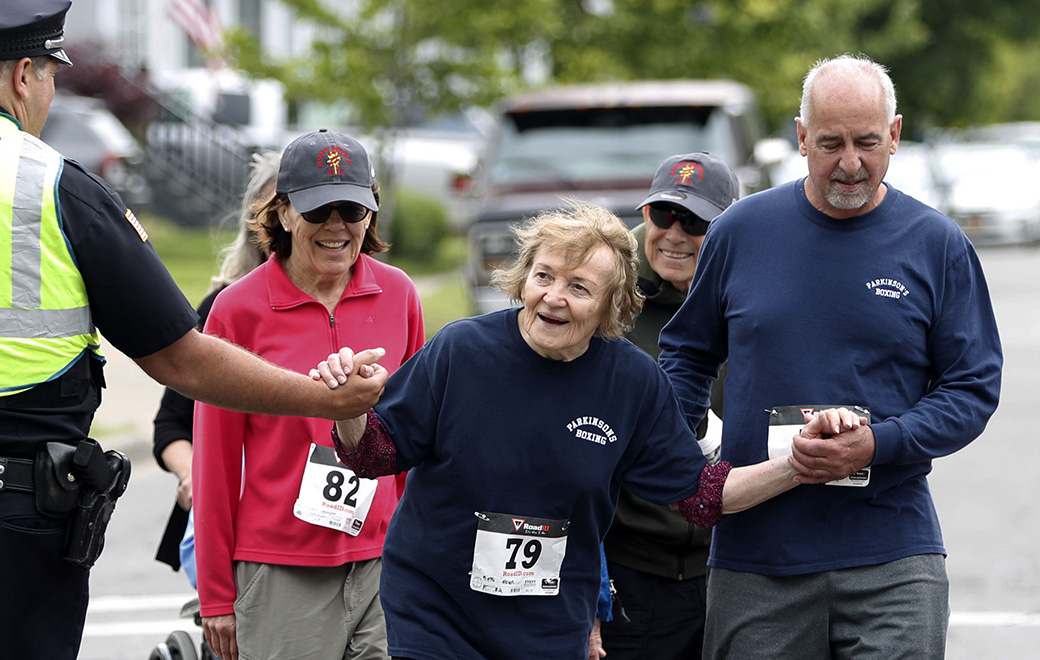 Helen Botti, 81, is accompanied by family members and her Parkinson's Boxing coach Jeff Quinn as she walks the 5K in Janeen's Memorial Run in Tonawanda last June. Once a marathon runner, Parkinson's robbed Botti of her ability to walk. She began regaining that ability when she started the boxing training program in May 2018. (Sharon Cantillon/Buffalo News)

“He’s got more energy to do stuff than we have projects for him,” Thompson said of Quinn, who is part of a bipartisan group of current and former elected officials whose Parkinson's battles have been noticed in Washington: Rep. José Serrano, a Democrat from the Bronx, announced last spring that he is living with Parkinson’s and will leave Congress in 2020; Sen. Johnny Isakson, a Republican from Georgia, revealed his Parkinson’s in 2015 and resigned from the Senate at the end of 2019, saying “health challenges are taking their toll”; and in June 2018, former Pennsylvania Gov. Ed Rendell, a Democrat, went public with his Parkinson’s diagnosis.

Quinn and Rendell have started working together on Parkinson’s advocacy. They were introduced by a mutual friend, former Secretary of Transportation Ray LaHood, a Republican who served in President Barack Obama’s Cabinet and, before that, was among Quinn’s closest friends in Congress. For Rendell to “hook up with Jack,” LaHood said, “it’s the kind of bipartisanship that will lead many others to say, ‘Hey, this is a no-brainer. Let’s get this done and let’s do it in a bipartisan way.’ ”

The political side can create policies that provide more access and coverage for treatment, as well as funding to fuel research that could one day lead to a cure. That’s the ideal. But there’s a more personal, immediate side to Jack Quinn’s own s battle that he wanted to share by going public. He did, and now that’s growing in a way that’s grabbing the attention of his political and business friends, too.

When Jeff Quinn was diagnosed with Parkinson’s years before his brother, he began treating it by training with boxing coach Dean Eoannou, who created a program that uses punches and footwork to rewire the brain. Parkinson’s impairs the brain’s production of dopamine, a chemical that helps transmit information to the body. That lack of dopamine can affect a person’s gait, speech and movement, which is the cause of tremors often associated with Parkinson’s. Eoannou’s program is based on the concept of neuroplasticity — the brain’s ability to reprogram itself by learning a new, challenging activity. Boxing, in effect, helps the brain work around Parkinson’s.

It worked for Jeff Quinn, who became a trainer at Eoannou’s Parkinson Boxing gym in Kenmore, and for dozens of others, who were regaining their ability to walk, drive, and perform other tasks that make quality of life better. There was a kinship at the gym, too, among people living with Parkinson’s. “They can sit and talk with somebody,” Jeff Quinn said. “The buzz is real positive. Some of it is as helpful as doing the exercises.” 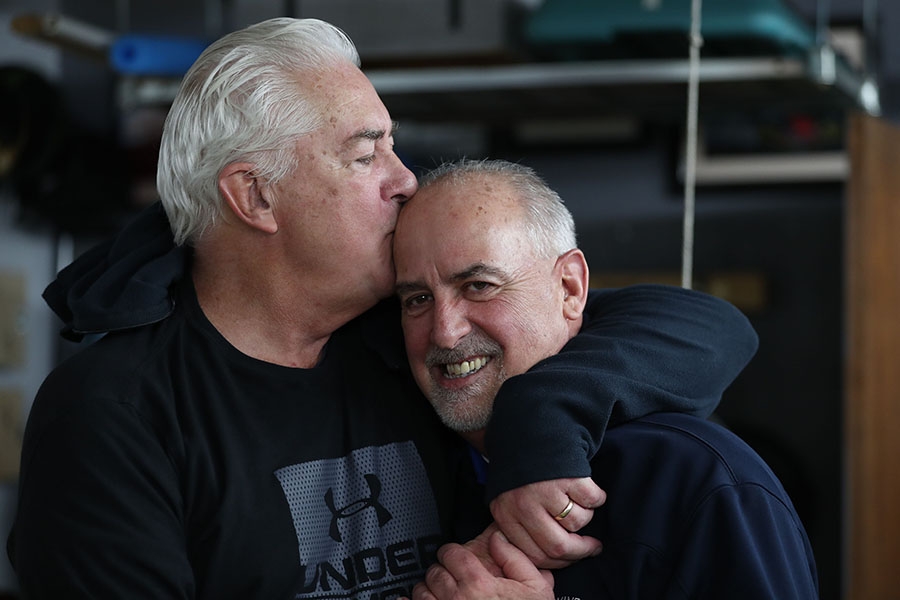 Eoannou, a longtime trainer who developed the program after his wife showed him a television segment about Parkinson’s patients using boxing as a treatment tool, long suspected he had created something good. The results were consistently positive, and he knew many of his clients were cutting down on their medications — a significant health benefit and cost savings. “‘I kept saying, ‘I can’t understand why there isn’t a line around the block,’” said Eoannou, who charges $50 for an hourlong session. “I could totally see what was happening here.”

The line started forming once Jack Quinn went public. After the April stories in The News, Eoannou received dozens of calls from people battling Parkinson’s and other neurological conditions, including multiple sclerosis, which is also becoming a focus for his business. Some people reached out wondering if the boxing program could help address stroke, traumatic brain injury, or even just balance issues. (It can.)

Eoannou’s client base increased from about 100 to 140 people, and he expanded his staff from six coaches to 10, with four more in training right now. The hours of service at Parkinson’s Boxing, which is open seven days a week, have doubled since April, and the business has the potential to grow much larger. Among the possibilities in the works:

• Higgins is advocating for the Parkinson’s Boxing program to become available to veterans through the V.A., an effort that involves making connections both locally and in Washington. “We’re not there yet,” Higgins said, “but we are going to get there.”

• Quinn helped connect the Independent Health with Parkinson’s Boxing in 2019, and the insurer quickly added the program to its coverage offerings. About 50 of Parkinson’s Boxing clients are Independent Health members. Quinn is now pushing the area’s other major health plans to also provide coverage. In a statement sent to the News, Dr. Thomas Schenk, the senior vice president and chief medical officer for BlueCross BlueShield of Western New York, acknowledged that “we’re engaged in conversation with Parkinson’s Boxing” and are “hopeful that we’ll be able to formally partner with them in the near future.” Univera Healthcare did not respond to a request for comment.

• Dr. Michael Cropp, the CEO of Independent Health, has become a strong advocate for Parkinson’s Boxing.

“There’s no question that over time we’re going to be able to demonstrate that there’s an economic value of significance to this,” Cropp said, noting that this type of treatment can help reduce medications and dangerous and costly falls. Cropp has discussed Parkinson’s Boxing with CEOs of health plans in other cities and also brought it up in a meeting in Washington with Alex Azar, the secretary of Health and Human Services. Quinn has met twice with Azar as well, in hopes of making Parkinson’s Boxing part of a therapy program that can be reimbursed through government programs such as Medicare. Those meetings were set up by LaHood, who is a friend of Azar. Quinn, LaHood said, “has put boxing on the map in terms of a therapy that could go nationwide.”

He’s put it on the map in Buffalo, too.

“Jack gave people the courage to come out,” Eoannou said. “Surprisingly, people say they’re embarrassed when they’re diagnosed — and they’ve had nothing to do with that diagnosis. It’s no fault of their own. They didn’t want to be out in public, they limited where they went, which only worked against them. Jack brought people out of the woodwork. ... It’s incredible, the people that came out because of him.” 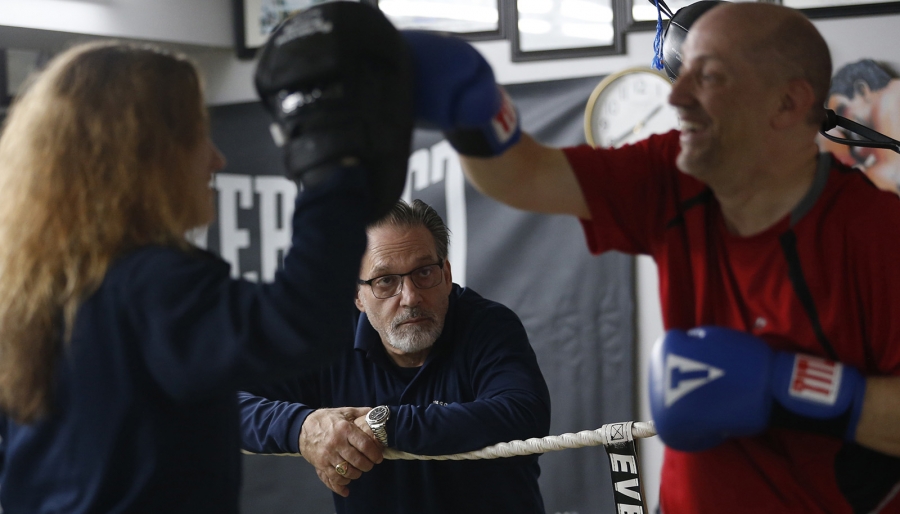 One of those people is Mel Green, a 78-year-old retired salesman from Niagara Falls. Green has waged a series of health battles over the last six years: throat cancer, pulmonary fibrosis and Parkinson’s. Green, who had a wheelchair and oxygen tank, was “reluctant to go out,” said his wife, Sue, who left a copy of The News article on Quinn for her husband to read last spring. Inspired by Quinn, Mel became a client at Parkinson’s Boxing.

During the first session, Sue asked her husband’s trainer, “How do you want me to set up his walker? Should I put the oxygen on the walker?”

“He’s not using his walker,” the trainer said. Instead, Mel held onto the rope on the boxing ring for balance. The second day, he didn’t hold on at all.

The Greens attend Parkinson’s Boxing twice a week, and Mel hasn’t been using his wheelchair. He goes out in public more often, and his confidence is stronger when using his walker.

Jack Quinn “was certainly the inspiration,” said Sue Green, who recruited six more Parkinson’s families from Niagara Falls to join the gym. “It changed Mel’s life, his attitude, everything.”