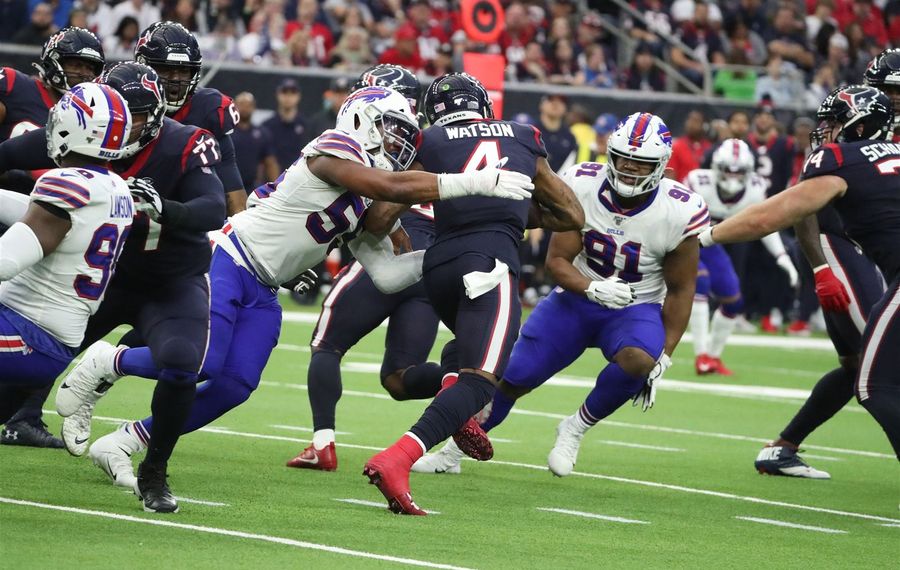 Houston Texans quarterback Deshaun Watson handled pressure like a superstar in the win over the Buffalo Bills Saturday.

Watson took seven sacks in the wild-card playoff game. But he beat the Bills’ blitzes for big plays. The Bills rushed five or more men 12 times in the game. Watson was 8 of 10 for 135 yards on those plays, with one scramble and one sack, according to Buffalo News charts.

The Bills rushed seven men at Watson twice. The first was the 41-yard pass to DeAndre Hopkins. Shaq Lawson almost got to Watson before he released the pass but was a tad late. Then the Bills rushed seven on the final pass play. It should have been a sack, but the Texans’ QB slipped out of the grasp of blitzers Siran Neal and Matt Milano.

Here’s a position-by-position review of the game, based on video review and on a scale of 0 to 5:

Quarterback (3.0): Josh Allen played his butt off, made some elite throws and produced 372 yards of offense. Not shabby for his first playoff game. Two third-down completions to Duke Williams were exceptional. The third-down strike on the run across his body to Devin Singletary was phenomenal. But Allen made a key turnover at midfield with a fumble. And he didn’t do quite enough to get the Bills a victory against a high-quality foe. Deshaun Watson outplayed him. Allen remains promising but a work in progress.

Running back (3.5): Singletary had 134 yards on 19 touches. His vision and hard running between the tackles were impressive. Two or three more touches would have been nice. Frank Gore was the victim of poor blocking, but the fact he can’t get to the edge well remained a hindrance.

Receivers (2.0): Brian Daboll eschewed the exclusive, three-wide, no-huddle approach, understandable given the offense was operating at a noise disadvantage. Passing out of heavy sets allowed for some completions outside the numbers and sucked up the linebackers on a few more completions. That’s part of the reason for 10 targets to Duke Williams. Yes, Williams failed to come up with a TD catch at the end of the first half. But he helped. If he was worthy of playing in the playoff game, why wasn’t he on the field the second half of the year for Robert Foster? The Bills’ two-back set caught the Texans in regular personnel, which created a mismatch for Cole Beasley on a 21-yard catch in the second quarter. Beasley caught 4 of 5 targeted passes.

Offensive line (2.5): The Bills produced 425 yards. But defensive coordinator Romeo Crennel did a good job scheming up pressures, mostly sending linebackers and DBs as part of four-man rushes. Crennell sent five or more 14 times. Mitch Morse and Dion Dawkins were the two best linemen for the Bills. Morse had a nifty cut block on Allen’s 42-yard run. He blocked Benardrick McKinney on the second level on an 18-yard run, pulled to lead a 19-yarder and blocked on the big screen play. Dawkins gave up a hurry to J.J. Watt that caused a key, third-down incompletion for Williams (it was too low) in the fourth quarter. Cody Ford wasn’t as bad as some suggested on social media. But he did give up a hurry and then a sack to J.J. Watt on the third-quarter red-zone trip. He yielded four pressures overall. His run blocking was solid. Watt played an amazing 52 snaps and had six pressures. Jon Feliciano had some trouble vs. the Texans’ superb nose tackle, D.J. Reader, and vs. Watt. Quinton Spain got singled up a few times against lighter inside rushers, not his strength. Mercilus beat him up the middle to create a sack.

Defensive line (3.5): The defense held the Texans to just 275 yards in regulation. Unfortunately, it wasn’t good enough. Six of the Bills’ seven sacks came on four-man rushes. Jerry Hughes had three sacks plus three other hurries. Trent Murphy had two and four other hurries. The Bills took advantage of shaky right tackle Chris Clark. The Bills held Carlos Hyde to 3.0 yards a carry on 16 attempts. On fourth-down stand near the end of regulation, Star Lotulelei penetrated and Jordan Phillips was stout to stop Watson’s QB keeper.

Linebackers (3.5): Too bad Matt Milano missed on the last blitz of Watson. Milano was in the middle of the action all day. His hurry caused Murphy’s first sack, and his good coverage helped create Murphy’s second sack. Milano also dogged Watson for a hurry on third down on Houston’s first OT drive. Tremaine Edmunds also had a busy, productive day. He spied Watson for a sack and had a key run-dog on the fourth-quarter stand. But Edmunds probably sank a little too deep in coverage on the third-and-18 conversion pass.

Defensive backs (3.0): DeAndre Hopkins had six catches for 90 yards, all in the second half. Four of them for 70 yards were vs. Tre’Davious White. The only one that really hurt was the 41-yarder. So White did a fair job. He also forced a Hopkins fumble that produced a Bills field goal. Hopkins was in the slot 75% of the first-half snaps, mostly avoiding White. Houston moved him wide on 59% of the second-half snaps. The Bills’ secondary did a good job tackling, for the most part. Micah Hyde bit on a fake handoff on Watson’s 20-yard TD run. Neal had a moment of uncertainty due to pre-snap motion on the Texans’ second TD, which caused Jordan Poyer to be a tad late getting to the flat in coverage. Neal showed his closing speed in a sack on Watson. But then there was the final missed tackle on the QB.

Special teams (4.5): Too bad the Bills didn’t close the win in overtime. Stephen Hauschka’s clutch, 47-yard kick at the end of regulation would have gone down in Bills lore. Hausckha was 4 for 4. Corey Bojorquez did a good enough job on four punts. He boomed a 5.12-hang time kick for 56 yards backed up on his own 10-yard line in the first quarter. His overtime punt wasn’t a good strike but it rolled to the Texans’ 17. The ruling on the second-half kickoff was the common-sense call and the proper decision under the rules.