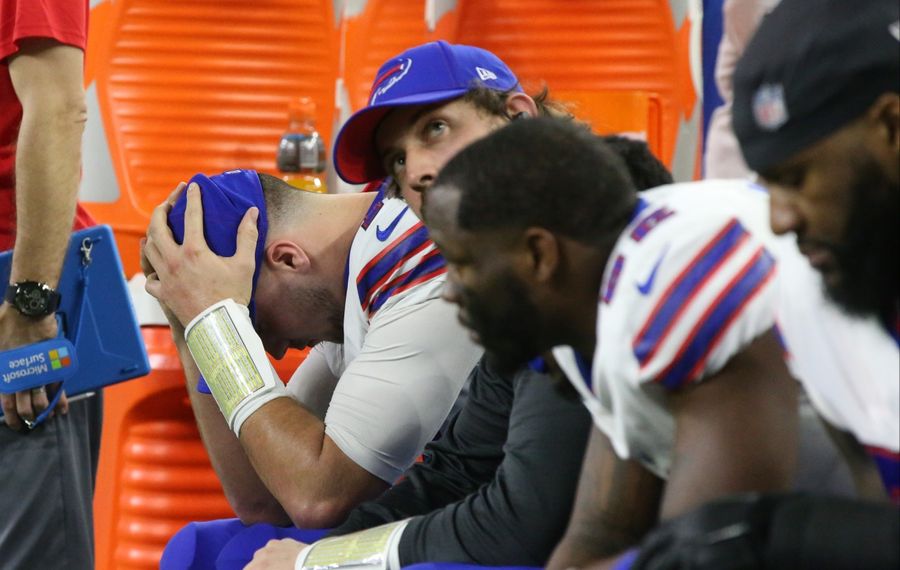 A hearty group of Buffalo Bills fans welcomed the team home after the team's 22-19 overtime loss to the Houston Texans.

The group of fans were at the airport at about 2 a.m. as the team returned from Houston after dropping the AFC wild-card playoff game at NRG Stadium. Buffalo had led, 16-0, late in the third quarter.

Bills rookie defensive tackle Ed Oliver greeted the cheering fans by sticking his head out of a cockpit window of the Bills' plane. He waved to the crowd and got roars of approval.

The scene at the Buffalo airport to welcome home our @BuffaloBills #BillsMafia @NFL @PanchoBilla1 pic.twitter.com/ueYVc4ShkI

In the wake of the loss, there was some discussion on Twitter about whether or not fans should greet the team at the airport. Unofficially, there were more negative comments than positive.

STOP GOING TO THE AIRPORT AFTER A LOSS! We have to stop supporting FAILURE! #Bills

Ohhh...and 100’s of Bills fans will be waiting outside for this team at the airport tonight, because that’s what we do. #onebuffalo pic.twitter.com/akHDPMCDTK

Seriously I’m probably the biggest Bills fan I’ve ever met and I would NEVER go wait for them at the airport after a loss. That’s so embarrassing.

Man, the fact that bills fans are already waiting at the airport to welcome the bills back into town says everything you need to know. This town deserves the run the bills are about to make. So proud of the team and am already waiting (impatiently) for next season

Some bills fans have gone to the airport #BillsMafia pic.twitter.com/wvhoxxfAQC

I want everyone to retweet this please. Those who are able should meet our team at the airport. Win or Lose we are moving in the right direction. Let’s show this team who we are as fans. They’re not there yet, but they will be soon.

If you go to the airport tonight, shame on you. I love my Bills, they’re my guys, but we needed better today. Mediocrity can not be accepted. I will continue to rep them and be ready for the offseason/2020, but a higher standard needs to be held imo

Anybody who is saying that they would not meet the #Bills tonight when they returned home from a playoff loss...just go look at our reception after our first Super Bowl loss and let me know how you feel after that

If you go to the airport and wait for the Bills plane tonight...please never speak to me again

Here’s a preview of the next Bills headline:

Just because I'm too tired to go to the airport doesn't mean I don't still love my #Bills. This team is growing together, and I feel really good about the direction in which they're going. #2020IsOurYear #GoBills #PuttingTheWildInWildCard #BillsMafia #CircleTheWagons

The airport would of been crazy if the bills just put the Texans away knowing the patriots lost.